A windstorm that battered British Columbia’s south coast last month and knocked out power to hundreds of thousands of BC Hydro customers over the holidays was the “most damaging” in the utility provider’s history, according to a new report.

The Dec. 20 windstorm, which produced powerful gusts of wind that blew in all directions, was preceded by several days of heavy rain that destabilized trees, according to BC Hydro’s review of the event released on Wednesday. A record 756,000 customers lost power – most for about a day, but for some up to 10 – and more than 900 field workers were out around the clock to repair broken power poles, transformers and cross-arms, and replace downed wires.

“Responding to this storm involved our biggest mobilization of crews, equipment and materials ever,” BC Hydro president and chief operating officer Chris O’Riley said in a statement.

More than 400 millimetres of rain fell in some areas in the days before the storm, the report noted. Soil was saturated, and trees with shallow roots, such as Douglas firs and hemlocks, were particularly vulnerable. Wind speeds topped 100 kilometres an hour at times. It was the first strong windstorm on the south coast since last winter.

“As a result, the ‘clearing’ effect that would have occurred through several smaller windstorms had not happened yet,” the report said. “This left a significantly higher amount of vegetation susceptible during this storm.”

BC Hydro said it is pleased with how quickly crews restored power for many customers, but acknowledged many people’s frustration over not being able to report downed lines because call operators were overwhelmed, or to find out the status of their outage. The company said it would work with cities and community partners to address these issues.

The storm hit Vancouver Island and the Gulf Islands particularly hard, with strong winds lasting more than 12 hours in some regions. At Dan Fraser’s home on Salt Spring Island, the wind damaged about 100 trees – including one that hit his pick-up truck, and another that hit a power pole.

The Fraser household was without electricity for about 10 days, using a small generator to run appliances intermittently. Christmas dinner – at Mr. Fraser’s brother’s home on Salt Spring, also without power – was barbecued turkey served by candlelight.

“It was not a big deal,” Mr. Fraser said. “I would give accolades to BC Hydro. Every time I phoned, I got fairly quick service. And every time you went out, rain or shine, they were there working on the lines and getting everybody going.”

Michael Byers, who also lives on Salt Spring, was without power for eight days. He says the event was a bit of an inconvenience, but brought the community together. One neighbour ran an extension cord some 50 metres from his house to Mr. Byers’s chest freezer to salvage a summer’s worth of garden produce. Others checked on elderly residents.

“I should say also that we have two teenagers," Mr. Byers said. "I took some enjoyment out of seeing them adapt to not having screens available 24 hours a day. In fact, they actually had to sit in front of the fireplace and speak with their parents once in a while.”

Mr. Byers, who holds the Canada Research Chair in Global Politics and International Law at the University of British Columbia, said he received some incorrect projections from BC Hydro on when power might be restored. But his bigger concern is how B.C. will adapt to increased extreme weather caused by climate change.

“Should we bite the bullet and make that large capital investment to protect our power source against these kinds of weather events,” he asked.

A BC Hydro report from November, 2018, said storms are becoming more frequent and severe, and that the number of storms the utility provider has dealt with in the past five years has tripled. Power outages caused by weather have increased by about 265 per cent – from 323,000 customers in 2013 to 1.18 million in 2017. 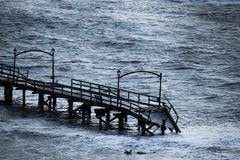