I may go to my grave without having ridden an e-scooter, electric unicycle or hoverboard. I grew up riding a bicycle, which to me seems slower and more stable. Watching the cool kids zip around on motorized personal transportation devices, some of which look wobbly, conjures up images of broken limbs in casts.

But the appeal of electric transport vehicles that can take you where you want to go without breaking a sweat is undeniable, and transportation that doesn’t rely on fossil fuels should be embraced. So, the B.C. government is right to amend the Motor Vehicle Act to integrate these new forms into our current road, bike path and sidewalk systems. E-scooters are by far the most popular of the new inventions, and they have been prohibited on public roadways. That hasn’t stopped some people from buying and riding them on roads, bike lanes and sidewalks.

But until regulations remove the uncertainty, there will not be any mass e-scooter rollouts from companies like Lime in B.C. This summer, Lime did not renew its pilot project with the City of Waterloo, because Ontario currently prohibits the use of e-scooters on city streets (earlier pilot routes were limited to city trails and private roads in an industrial park). The company stated it wouldn’t commit further until the law changes. Other Lime pilot projects are under way in Calgary, Edmonton and Montreal where provincial laws are more amenable. Lime has expressed interest in B.C., so we can expect pilot projects here before too long.

We all know some forms of transportation are incompatible; roads and pedestrians, sidewalks and bikes being the most obvious examples. But it’s less clear cut where electric scooters, unicycles or hoverboards fit. This is where B.C. can benefit from being late adopters. We can and must learn from others’ mistakes to avoid the problems e-scooters are causing in other cities.

The most common complaints coming from large American cities where e-scooters are hugely popular are excessive speed and scooter litter. Unlike bike share programs where the bikes are returned neatly to a rack, e-scooters can be ditched anywhere (thanks to GPS chips, which help the next customer then find them). The result can be cluttered sidewalks and blocked business entryways. In San Diego, the situation got so bad, two men formed a company called ScootScoop which collects scooters dumped on private property and charges scooter companies to retrieve them. Cities like San Diego, Santa Monica and Nashville are testing designated parking areas called scooter corrals to try to cut down on clutter and have threatened bans if the situation doesn’t improve. But I wonder if cities should insist on docking stations for scooters as well as bikes.

Studies are also starting to show my fears about scooter safety may be founded. A study by the public health department in Austin, Tex., conducted from Sept. to Nov. in 2018, found 20 people are injured per 100,000 scooter trips. No one died, but there were reports of broken bones, concussions and severe bleeding. And this summer, four e-scooter rider deaths in the Atlanta area prompted the city to ban riding at night.

Some scooters can travel faster than 60 kilometres per hour, which is higher than the speed limit for cars on Vancouver’s residential streets. Any moving vehicle capable of travelling that fast certainly doesn’t belong on a sidewalk and it’s questionable whether it’s a good fit in a bike lane. Most e-scooters are slower. Lime regulates speeds on its Calgary machines to 20 km per hour, which is fine on a street, but still seems fast for a sidewalk where scooters in that city are allowed. City officials are considering asking that speeds be dropped even lower in high-congestion areas.

There are big decisions ahead for Vancouver. How can scooter clutter be controlled? Do we want any of these devices on sidewalks? How about bike lanes? And how fast should they be allowed to travel?

My guess is before too long, scooter companies everywhere will be forced to drop speeds and develop docking stations. Problems faced by other cities are not a reason for B.C. municipalities to say no to e-scooters. They are eco-friendly and judging by the laughter from people on them, obviously fun to ride. But just like someone learning to ride an e-scooter, any B.C. municipality with thoughts of welcoming them should go slow.

New legislation aims to address conflict, confusion over growing use of electric scooters in B.C.
October 8, 2019 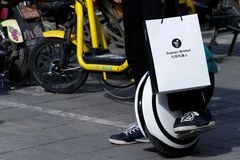 Politicians and planners look to data for answers on e-scooters Subscriber content
September 20, 2019 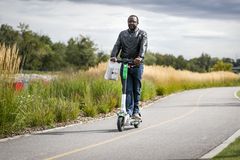 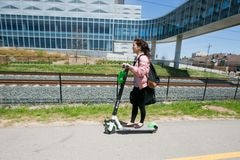