Rikia Saddy often hears coyotes howling in unison on the golf course a half block from her house, wild choral performances that sound to her like a Lion King soundtrack. Once, she heard the screams of a neighbour’s cat being killed.

But she’s never seen a coyote in the 15 years she’s lived in Southlands, a rural-feeling area of big lots and occasional horses in southwest Vancouver.

That’s the experience for the vast majority of people living in Vancouver. Coyotes are all around them, but they rarely see them.

That changed dramatically this year, when more than 45 people -- from toddlers to seniors -- were bitten by coyotes in Stanley Park, the city’s largest and most famous park that sits next to the heavily populated West End. 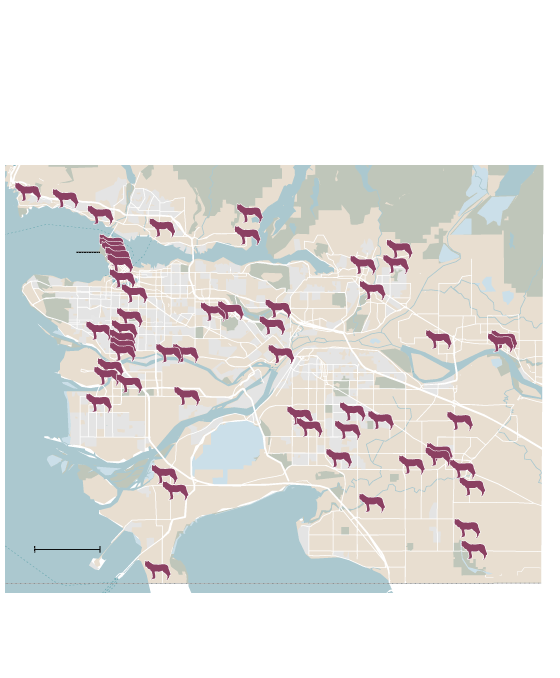 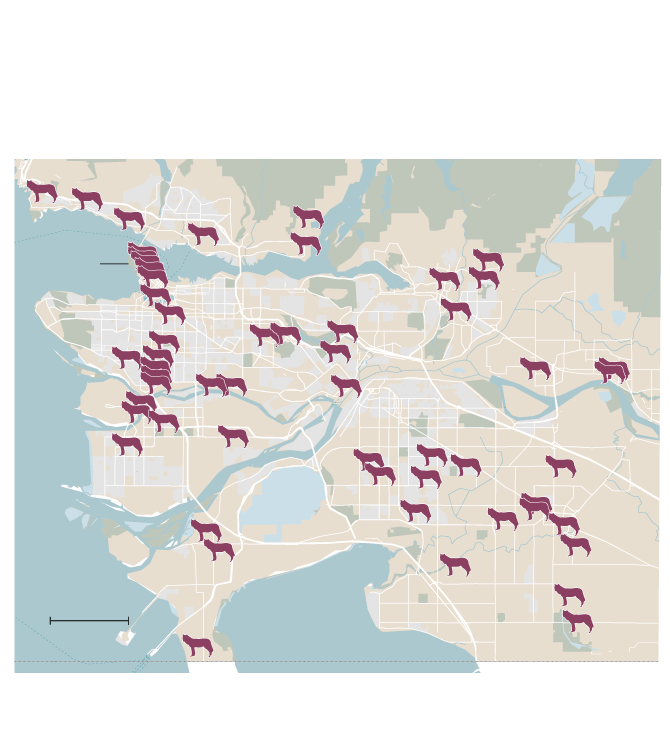 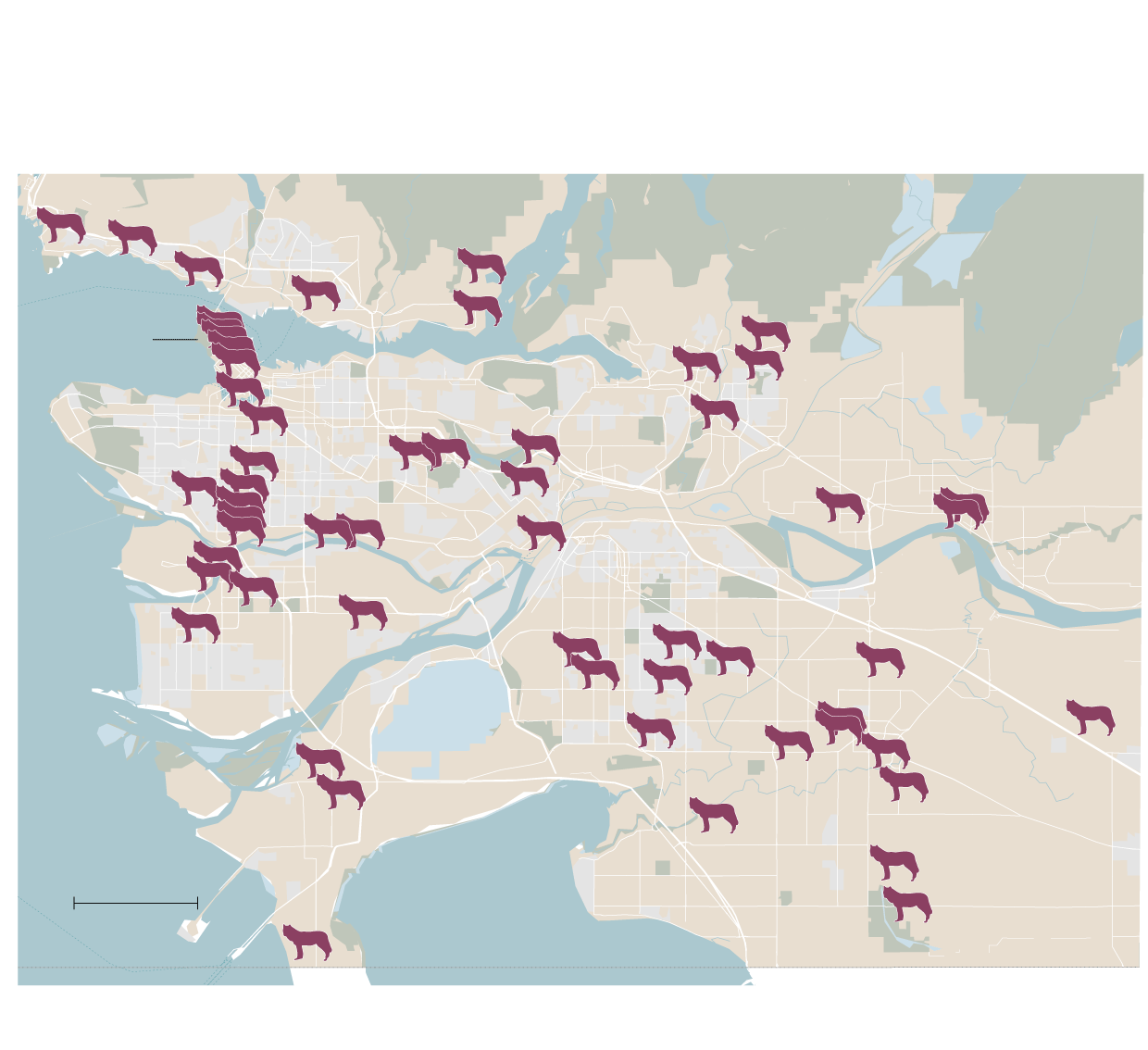 It led to successive rounds of culls that resulted in 11 coyotes being captured and killed and, at one point, a complete closure of the park for three weeks in September and, this week, the unprecedented news that two people had been arrested and their vehicles seized for allegedly feeding coyotes.

“I think that’s astonishing,” said Chris Anchor, the senior wildlife biologist with 40 years’ experience in the Chicago area and a co-founder of the Urban Coyote Research Project, the largest coyote-research effort on the continent. “This is a very, very strange behaviour.”

Incidents of coyotes biting people are typically rare. Canada sees an average of three coyote incidents a year. An academic paper in 2009 was able to find only 142 reports of incidents in both Canada and the U.S. between 1960 and 2006.

The Stanley Park attacks have sparked a fierce debate in the city about why they happened, with speculation about everything from ingestion of street drugs to neurological malfunction to a decline of human visitors (from those objecting to the park’s COVID-19-spawned limits on cars) to a huge increase in human visitors (from those saying the pandemic has upped use of all parks).

But wildlife experts in various parts of the country are saying they’ve seen a rise in coyote-biting incidents during the pandemic, which they attribute almost solely to more people feeding animals as they spend more time at home or in local parks.

“There’s no doubt in our minds that there was a dramatic increase in feeding,” said Mr. Anchor. He said 40 years of intensive research has shown that is the only cause of changes in coyote behaviour, unless it’s a case of rabies.

Necropsies done on the 11 coyotes killed in Stanley Park so far have shown no signs of drug ingestion or rabies.

In California, “you get coyote attacks, but never 45 in eight months. I don’t think anyone allows it to go that long,” said Petros Chrysafis, the founder of Predator Detection and Deterrence in Fresno, Calif.

One eastern suburb of San Francisco experienced five biting incidents between the summer of 2020 and February, 2021 -- the worst case in recent memory, he said. After the fifth incident outside a convenience store in Lafayette, there was a massive 24-hour-a-day operation to catch the animal. By March, a coyote that was captured and killed was proven through DNA testing to be the one responsible for all the incidents.

Vancouver animal-rights groups are even more distraught by what they say was a slow and inefficient approach to dealing with the problem that ultimately led to more animals being killed than needed to be.

“Nobody did anything for so long,” said Lesley Fox from the Vancouver non-profit, The Fur-Bearers. “There was a lot of inaction until somebody hit the panic button and then someone decides the province should come in and clean up the mess.”

She said her group started writing letters to the park board in January about the need to get more aggressive about warning people not to feed animals. Like the coyote experts, they doubt there were ever 35 coyotes in the park, as some provincial officials have suggested, and that the 11 killed is likely most or all of the population.

Shelley Alexander, one of Canada’s leading coyote researchers who is based at the University of Calgary, said she too was frustrated by the inaction. Dr. Alexander was an adviser to a task force made up of all the agencies dealing with the issue during the early months of the attacks.

The coyote response involved a combination of the Vancouver Park Board, which is responsible for overall park management, the B.C. Conservation Officer Service, a branch of the environment ministry that responds to predator attacks, and the Ministry of Forests, Lands and Natural Resource Operations, which is the agency responsible for animal removal.

“I had to step away because there was no action,” said Dr. Alexander. “If something starts going wrong, you have to act right away. Co-existence does not include living with coyotes that bite without provocation.”

She said it was never clear to her who was ultimately in charge. “It was a very complicated situation.”

A representative for the conservation-officer program said the forests ministry or the park board could answer why the process took so long. A forests ministry representative said the agency “does not take wildlife removal decisions lightly, and always seeks to take a graduated approach that allows wildlife and people to co-exist.” It started a population-wide cull only when a series of measures by the park board and conservation-officer service didn’t work. Park-board commissioners said they believed provincial agencies, working with park-board staff, were in charge and that the process was a mystery to them as well.

“I was surprised how undecisive all the biologists were. It was not something we had control over,” said commissioner Dave Demers.

Ms. Alexander said it was good news this week to hear that two people had been arrested for feeding coyotes. That’s the kind of strong message that needed to be sent from the beginning, she said.

“There often is a bold stance against feeding in writing or wildlife management policy, but the enforcement is often lacking.”

That concern about feeding and the need for strong action—even arrests -- is the same caution all coyote experts have.

“People here feed everything and it took throwing them in jail for four or five days to make them stop,” said Mr. Anchor, who described the typical coyote feeder, using non-scientific language, as “crazy cat people.” (In keeping with that narrative, some social-media posts have noted that cans of cat food were being left along the seawall that runs around the park.)

He and the urban-coyote research team have done meticulous research on coyotes that have been killed after attacking. That includes such fine-grained work as analyzing thousands of fecal samples and of isotopes in coyote whiskers by one-week segments – something that’s possible because they grow at such a predictable rate – to see what they have been eating. That’s on top of intensive necropsies on every animal.

“Every single time there’s an incident with a coyote, people are purposely feeding them,” he said. “That not my opinion. That’s facts.”

Once they get fed, coyotes change permanently.

“As soon as coyotes make an association that humans have food, they’ll approach you,” said Mr. Chrysafis. “But if you feed them, it’s a death sentence.”

Dr. Alexander describes it as losing their “bite inhibition.” Once that’s gone, you can’t bring it back.

That’s why coyote researchers and advocates say, often with frustration and sadness, that there is no solution other than trapping and killing when a coyote starts biting.

The best hope for coyotes in Stanley Park now, says Dr. Alexander, is that when a new group moves in, as is sure to happen, they don’t get fed and go back to living with humans peacefully.

Ms. Fox said what everyone hopes for now is that Vancouverites will take some lessons from this so there doesn’t have to be a mass, indiscriminate cull again or a pointless debate between those saying “Kill them all” and others saying “Do nothing, learn to live with biting.”

“It’s such a black eye for Vancouver. I hope we really do learn from this.”