Since last week, RCMP have arrested more than 100 people blockading logging roads in a Vancouver Island valley, in a protest that is shaping up to be the largest act of civil disobedience over logging in British Columbia in decades. Much of it is taking place in Premier John Horgan’s riding. As Mr. Horgan’s government drafts a new old-growth forestry model for the entire province, the battle over Fairy Creek is putting a spotlight on the management of a shrinking base of ancient forests.

What is Fairy Creek?

This section of rain forest on southern Vancouver Island, northeast of the coastal town of Port Renfrew, is a small part of Tree Farm Licence (TFL) 46, which covers 59,432 hectares. Parts of the TFL have been logged, and a section was carved out and protected in the Carmanah Walbran provincial park. Other sections are intact old-growth forest that are available for logging.

Port Renfrew has built up a recreational tourism brand as the “tall tree capital of Canada” and the Fairy Creek watershed is surrounded by giants, including the world’s largest Douglas fir, and Canada’s largest Sitka spruce. In fact, TFL 46 has nine trees listed on the University of B.C.’s registry of the province’s most notable big trees. The forests here are home to a host of endangered species including Western screech owls, Northern Goshawk and Northern Red-legged frogs.

The protests are not confined to Fairy Creek, but the name has become a catch-all because this is where the conflict began, when a new logging road was observed running past a high mountain waterfall at the headwaters of the creek.

Old-growth forests work hard for us. Now, we need to work for them

The Teal-Jones Group has government approval to log in different sections of TFL 46. The cut block that has been approved within the Fairy Creek watershed is 12.8 hectares, mostly old-growth forests. Since last summer, a group called the Rainforest Flying Squad has maintained a series of moving blockades in a bid to stop the company from logging in the region. An injunction was granted by the BC Supreme Court on April 1, paving the way for the RCMP to come in and remove protesters at a string of blockades on logging roads within the TFL. Arrests began last week, and 55 people were arrested on May 25. 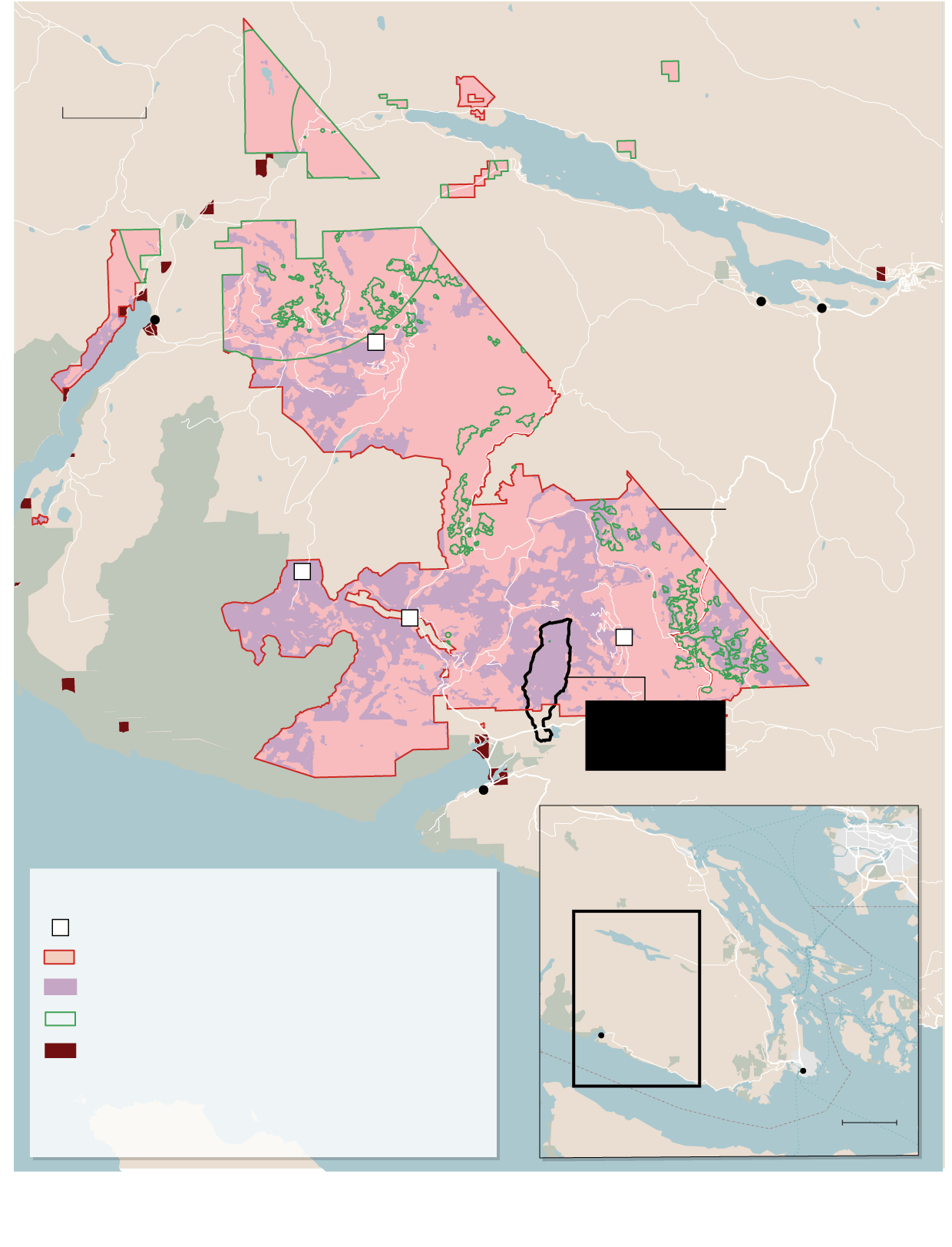 Based on B.C. and Federal Government Mapping Data; b.c. government

How many old-growth forests are left in B.C.?

British Columbia is home to 57 million hectares of forests. “In our province, there are trees as far as the eye can see,” said Susan Yurkovich, president and CEO of the Council of Forest Industries. Each year, the industry harvests about 200,000 hectares of land, but much of it is replanted forests – second growth – which do not recreate the rich, biodiverse ecosystems of an undisturbed forest. Approximately 50,000 hectares of old growth is harvested annually.

There are 13 million hectares of old forests in B.C., and as much as 80 per cent of that land consists of less-productive ecosystems such as bogs or sparsely treed high elevations, which are not at risk because they are of low commercial value. The ancient, temperate rain forests – the kind that end up featured in ad campaigns for “Super, Natural British Columbia,” are increasingly rare.

An independent study published last year found that those highly productive, intact ecosystems total just 415,000 hectares – less than 1 per cent of the province’s remaining forests. “These ecosystems are effectively the white rhino of old-growth forests. They are almost extinguished and will not recover from logging,” the report from Veridian Ecological Consulting concludes. 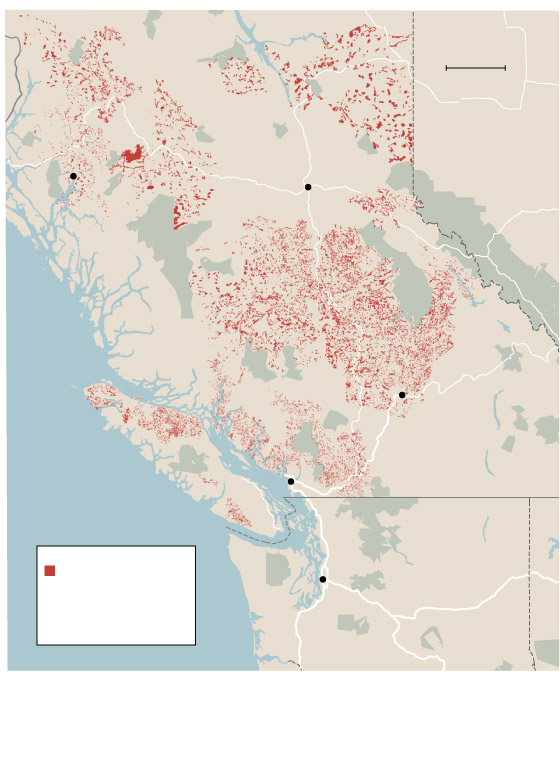 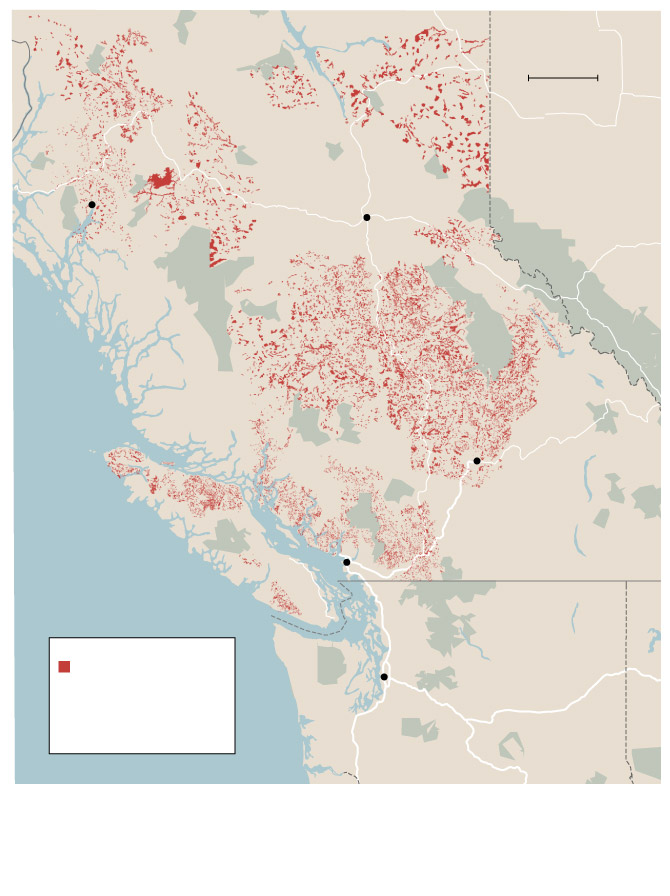 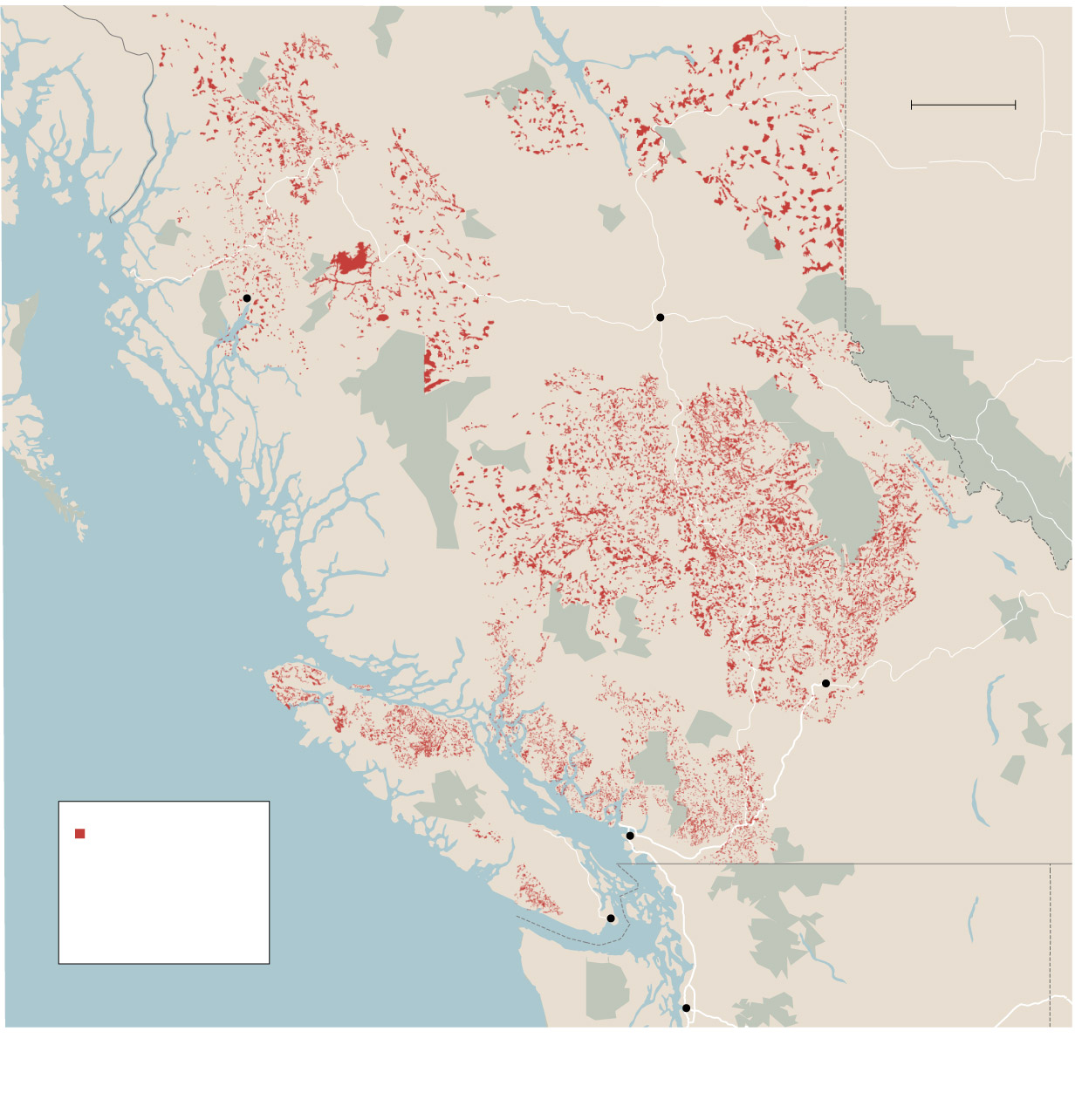 How old are old-growth trees in B.C.?

The B.C. government defines trees on the coast that are 250 years old to be old growth. Within TFL 46 there are yellow cedars that can live for 1,500 years or more.

Nearby Pacific Rim National Park is home to the largest tree in Canada, known as the Cheewhat Giant, a Western red cedar that is more than 55 metres in height and six metres in diameter. It is estimated to be about 2,000 years old.

Big trees such as the yellow cedar and Western red cedar that grow so well around Port Renfrew are prized by the forest industry. While old growth is a small part of the overall harvest in B.C., it is an exceptionally valuable one. Increasingly, the forest industry is adapting to a greater share of second-growth timber, but that means retooling mills and finding new markets, Ms. Yurkovich said. “We have a study under way right now looking at potential new markets, as we start to move more into second growth, but we will still expect to have a modest old-growth harvest, even in the future.”

The injunction hearing in BC Supreme Court earlier this year offered a window into the importance of old-growth logging to B.C. forestry companies. The court was told that the impact of the blockades was causing Teal-Jones irreparable financial harm.

“Teal employs approximately 450 people within its processing and manufacturing facilities,” the judgment noted. “If Teal is unable to log within the area of TFL 46, it will not have an adequate timber supply for its mills. It may be forced to shut down its mills, resulting in layoffs of employees, and Teal’s inability to supply its customers. Teal estimates that the end product value of the products that it will produce from the timber sourced from TFL 46 is approximately $20-million.”

British Columbia has set aside 10 million hectares of old-growth forests as park land or other designations to limit industrial development, but unlike some countries such as New Zealand, old-growth logging is still permitted. And while Canada and B.C. have legal protections for endangered species that live in these forests, those rules can be narrowly applied. Teal-Jones must not disturb an active nest of a Western screech owl, for example, but the province hasn’t identified where the nests are.

Even in areas that are protected, enforcement is limited. Poaching is increasingly a threat, given record-high prices for lumber, but policing resources are stretched thin.

Why are old-growth forests important?

There is increasing recognition that biodiversity depends on intact ecosystems, and as of 2020, there were 1,680 species at risk of extinction in the province – more than any other province or territory in Canada. For B.C., the key to conserving natural biological diversity is held in protecting its old-forest lands. In 2019, the province commissioned a report on how to protect those ancient ecosystems. The authors noted that B.C. is at high risk to loss of biodiversity because of poor management of its forests. The report calls for a paradigm shift that begins with the understanding that these old-growth forests are not renewable, and can be worth more left standing than logged. It calls on the province to declare conservation of ecosystem health and biodiversity of British Columbia’s forests as an overarching priority, and enact legislation that legally establishes this priority for all sectors. The province has agreed to implement all 14 recommendations in the report – but over the span of several years.

Climate-change scientists have also noted that, to help British Columbia adapt in the face of a changing climate, it needs resilient forests: And the most resilient forests are those that have been intact for hundreds of thousands of years.

Who is involved in the conflict?

Joshua Wright, a teenaged climate-change activist from Washington State, spotted the road building at the headwaters of Fairy Creek last summer while cruising the internet from his home. “I contacted a few people, and a few days later, there was a blockade.” The Rainforest Flying Squad has been disrupting logging activities ever since. Hundreds of activists have been through the camps, which move as Teal-Jones’s operations move. The action has been supported by many environmental organizations, and Tzeporah Berman, international program director for Stand.Earth, was arrested at the blockades on May 22.

The Teal-Jones Group is the largest privately owned timber harvesting and primary lumber-product manufacturing company in British Columbia. The family owned company is the world’s largest maker of acoustic guitar heads, and it also produces dimensional lumber for construction, log home timbers and cedar shingles. In 2019, it curtailed operations in B.C. and invested more than $30-million to upgrade its sawmill and dry-kiln operations in the state of Virginia. But now that lumber prices are shattering records, B.C.’s forest industry is running at full capacity.

Much of the conflict is taking place in the traditional territories of the Pacheedaht First Nation, which depends on forestry for its own revenues and operates three saw mills. The band’s leadership has told the protesters to leave, saying they are undermining the nation’s sovereignty. However, some members of the band – notably elders and young people – have been on the front lines of the blockades. Victor Peter is one of the youth supporting the blockades, and states that he is an unseated hereditary chief of the nation.

In B.C., where the government has formally committed to reconciliation with Indigenous peoples, most forestry companies are now pro-active in seeking co-operation with the First Nations who represent the territories where they intend to log.

In this case, Teal-Jones is not in partnership with the Pacheedaht, but has obtained its consent. Pacheedaht signed a revenue-sharing agreement with the provincial government in 2017. Under the agreement, the band receives a portion of the stumpage fees paid to the provincial government and, in exchange, agrees not to interfere with that activity.

In his judgment on April 1, BC Supreme Court Justice Frits Verhoeven made it plain where this conflict will be resolved: “All of the concerns raised by the respondents are for the government to address, and not this court.”

Last fall, in the middle of the provincial election campaign, Mr. Horgan promised to accept the recommendations of the independent panel on old growth. His government deferred logging in nine areas throughout the province, almost 353,000 hectares. Garry Merkel, co-author of the report and a registered professional forester, says those deferrals are “low hanging fruit” and the government has not yet substantively acted to set aside the most sensitive, important forests.

The Premier has said consultations are moving slowly, but change is coming. In early June, after consultation with Indigenous communities, the Horgan government will table an intentions paper outlining what changes it plans to make to the provincial forest policy.

Mr. Merkel acknowledges that the kind of change that is needed will take time, but he also warns that the kind of protests taking place right now in the Premier’s riding won’t abate as long as precious old-growth forests are at risk. 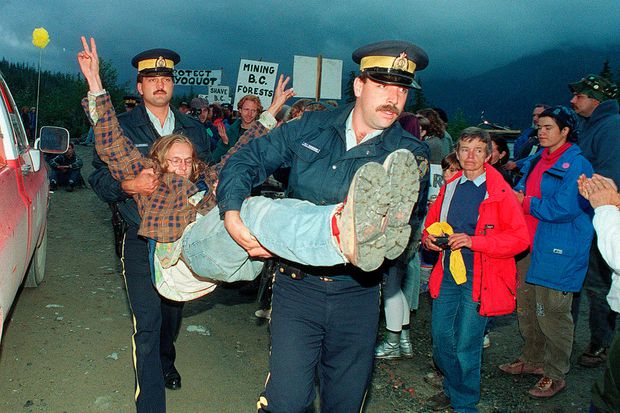 Opinion: The blockades then and now

When environmental activist Tzeporah Berman wrote this opinion piece – a reflection on her time organizing 1993's Clayoquot Sound protests, and the fate of B.C. logging policy since then – she predicted she would soon be either at the Fairy Creek blockades or in jail. On the weekend it was published, she was arrested.