A First Nations youth whose body was found in the bedroom closet of his group home four days after he was reported missing was in the care of an agency with a history of failing to meet provincial standards and with two high-profile deaths over the past two decades.

The family of Traevon Desjarlais-Chalifoux held a news conference on Thursday to call for a public inquiry into his death. Family members are especially angry that the police and the coroner’s service closed the file, quickly ruling his death a suicide and declining to do an autopsy.

“We don’t know how this could be – a child is left by themselves, alone. We want to know why,” family spokeswoman Theresa Campiou said on Thursday of her great-nephew.

In an interview, Marlene Poitras, regional chief of Alberta for the Assembly of First Nations, echoed her thoughts: “How can someone be left … for four days in a closet,” she said. “I can’t fathom that happening. It’s beyond atrocious.”

The 17-year-old was a member of the Driftpile Cree Nation in Alberta, but lived in B.C.. On Sept. 14, he was reported missing from his group home in Abbotsford, B.C. His body went undiscovered for four days.

At the time, the youth was in the care of a delegated aboriginal agency through a voluntary custody arrangement, an agreement with a parent and an agency to have a child placed temporarily in care. The agency, Xyolhemeylh, also called the Fraser Valley Aboriginal Children and Family Services Society, said in a statement it has launched an internal investigation into the death.

The agency said it was “heartbroken by the loss of this youth" and added that the agency would be “fully co-operating with all external investigations.”

Xyolhemeylh was caring for Alex Gervais, a B.C. teen who lived for months in an Abbotsford hotel – in violation of government policy – before he fell to his death from a window in 2015.

It was also the agency responsible for two-year-old Chassidy Whitford when she was killed by her father on the Leq'á:mel First Nation in 2002. A provincial review found the agency did not meet child-protection standards, partly because the toddler was allowed to continue living with her dad despite unexplained injuries.

The Ministry of Children and Families has undertaken audits of the agency. The most recent, completed last year, found that Xyolhemeylh had a compliance rate of just 11 per cent when it came to developing comprehensive plans of care. In 49 per cent of cases the ministry reviewed, no plan was on record.

When it came to social workers' contact with children, the agency had a 3-per-cent compliance rate. The audit found that in 10 per cent of cases reviewed, there was no documented contact with a social worker in the three-year audit period.

The agency has a huge caseload. It is responsible for the care of Indigenous youth from 18 First Nations in the Fraser Valley. Last year, it had 410 open cases and 340 service requests, according to the audit. Staff turnover is high, and vacancies go unfilled for long periods, the audit found.

“Words can’t convey how devastating it is not to know what happened – and to have a sense that you’re shut out from information that others have,” said Sarah Rauch, counsel for the youth’s mother. Ms. Rauch said a public inquiry is the only way the family “can begin to get justice and understand what happened.”

“We are extremely concerned by the lack of an investigation into Traevon’s death,” Kukpi7 Wilson said. “Too often our people go missing without investigation. Grieving families are left without closure. This is totally unacceptable.”

Concerns are also being raised about whether the pandemic has affected the care that youth – some of B.C.'s most vulnerable residents – are receiving. The office of B.C.'s Representative for Children and Youth, Jennifer Charlesworth, which tracks incidents of violence and harm reported by youth in care in B.C., has seen a 16-per-cent increase in these reports since March, including a spike in overdoses.

In a given month, the office generally receives about 300 reports, Ms. Charlesworth said in an interview. Last month, it received 380.

“Kids don’t have access to their regular supports,” she noted. “They’re not at school. They are not in community programming. They are not receiving one-to-one support. Their whole world is upside down and the things they count on aren’t in place.”

Mary Ellen Turpel-Lafond, B.C.'s former representative for children and youth, said on Thursday that there was a “substantial likelihood” that Mr. Desjarlais-Chalifoux’s services were blocked because of the pandemic. If that’s the case, she added, a public inquiry needs to be considered, and quickly.

“This has been a really challenging time. We need to be vigilant that the system is working. It won’t be helpful to learn what the problem was in 2025.”

Mr. Desjarlais-Chalifoux’s mother visited the group home shortly after she was told her son had been found dead, Chief Poitras said. She wanted to say goodbye to him, but by the time she arrived, his body was gone. Before she left, she was given a little backpack containing all of his belongings. 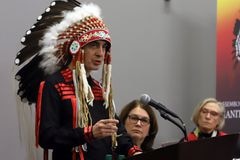