After unmarked graves were uncovered at the former Kamloops Indian Residential School at the end of May, Indigenous Peoples from across British Columbia began to stream into Tk’emlúps te Secwépemc territory to pay their respects.

Local volunteers would hear a delegation from another nation was arriving soon and, after a flurry of messages in their group chat, a welcoming party would be scrambled to drum, sing and offer sandwiches and cold sxúsem, or soapberry juice, to their guests.

Over the past week and a half, the volunteers led in part by Morning-Star Peters and Nikki Fraser have pivoted to open up their community’s powwow arbour, or outdoor arena, to wildfire evacuees. They came from in and around Lytton, B.C., where a fire destroyed the village, killed two people and damaged nearby First Nations. Others arrived from north of Kamloops, where the massive Sparks Lake fire threatened the Skeetchestn Indian Band’s territory. Eventually, firefighters exhausted from long shifts started stopping in for meals and to grab extra clothing and supplies donated by the community.

On a blistering day last week, Ms. Fraser had just overseen a kitchen that was making more than 100 breakfasts a day, and double that for lunch and dinner. Meanwhile, Ms. Peters ensured the children were in a safe and fun space to spend their hot summer days: having water fights, riding around on donated bikes or streaming movies on a big-screen TV flanked by booming speakers. Wi-Fi is available and, last week, a trio of gamers had hunkered down at a desk with a wall of computer screens to spend hours escaping to a different reality. Parents said they appreciated being able to get their families out of their cramped hotel rooms and many said they were tired of restaurants and welcomed a free home-cooked meal.

“The evacuees are our bosses,” Ms. Peters said as her husband Will sorted clothing and camping gear behind her. “We go off of what they want.”

The Tk’emlúps site is a provincially designated Emergency Operations Centre, but offers more services than most others, which are less community-oriented and mainly offer registration and assistance.

Under a large white canopy, traditional healers offered to smudge or brush off people with cedar near the entrance to the arbour – a short walking distance away is the banks of the South Thompson River where an orchard marks the burial site that kicked off the country’s current reckoning with its colonial history.

Up a small hill and past a pristine soccer field, volunteers buzzed around the buildings that neighbour what was once the site of Canada’s largest residential school. At an indoor gymnasium, Moccasin Square Garden, people who fled their homes with little more than the clothes on their backs set about finding new wardrobes, toiletries and household items. After a few days, donations filled the building and then two outside shipping containers, so people wishing to help are now being asked to give cash or gift cards.

Chief and council recently took over the care of all evacuees on site from the volunteers, but Ms. Peters and Ms. Fraser still routinely drop by to pitch in. Both women said generosity shown to these climate refugees is part of their culture, noting that in 2017, both of their mothers volunteered to help evacuees after a wildfire decimated the communities in and around Williams Lake.

Dianne Kehler, deputy director of emergency services for the Tk’emlúps, expects more evacuees from other parts of the province to keep finding their way to the grounds into the fall, given the recent heat wave that fuelled what is already one of the most destructive wildfire seasons in recent memory.

“We are prepared for anybody and anything,” she said.

Tk’emlúps te Secwépemc Councillor Thomas Blank, a retired wildfire fighter, said this work is challenging, but his nation is proud to provide a safe space for these evacuees.

Christine Abbott and her husband were among those who needed a place to go. After fleeing their home in Lytton on 10 minutes’ notice, they stayed in a motel for a week until a couple from Merritt read about their plight online and offered them a sweetheart deal on an RV that had been sitting in storage.

As soon as the couple bought the vehicle, they checked out of their lodging and set up camp near the main entrance of the powwow arbour – where Ms. Abbott says they have found better food, a sense of community, familiar faces and a “safe place to break down and cry, get mad then shake it off.”

On Thursday morning, Ms. Abbott was walking the grounds with her purebred pug Spudz after a late night with friends, reminiscing and telling stories.

Ms. Abbott said she has found a community among the other evacuees, who are from many different walks of life. She is white, and her husband is a member of the Lytton First Nation.

“We’re healing,” she said. “Everybody is here from every nation – this is total love.” 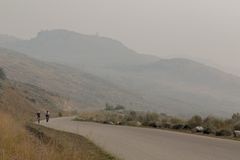 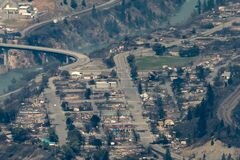 Transportation Safety Board sends investigators to Lytton, B.C., amid speculation a train may have sparked deadly fire
Subscriber content
July 10, 2021 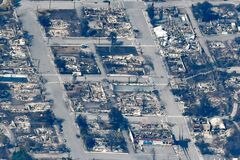