Five British Columbia First Nations are challenging a federal decision on salmon fishing in their territories this year, and they are accusing federal fisheries officials of systemic racism in the way they have been treated.

The five Nuu-Chah-Nulth First Nations are upset that Ottawa decided to give a surplus allocation of salmon – which arose this year due to reduced recreational fishing during the COVID-19 pandemic – to commercial fishers rather than to the First Nations.

Clifford Atleo, lead negotiator for one of the nations who is also called Wickaninnish, says he feels sports and commercial troll fishers are given more rights to fish in the waters off the west coast of Vancouver.

He says the latest decision to shut First Nations fishers out of an opportunity to catch more chinook salmon this year shows systemic racism is “alive and well” within the federal fisheries department.

A 2018 B.C. Supreme Court ruling directed Ottawa to take a more “generous approach” to allocations of chinook salmon to the First Nations given the importance of this species to the Nuu-Chah-Nulth people.

The ruling from B.C. Supreme Court Justice Mary Humphries noted that the government’s salmon allocation policy at the time gave recreational fisherman priority to fish for chinook and soho salmon ahead of the First Nations and advised the fisheries minister to reassess this policy.

Despite this ruling and changes that have since placed the First Nations at a higher priority than sport fishers, the Ahousaht, Hesquiaht, Tla-o-qui-aht, Ehattesaht and Mowachaht/Muchalaht nations say their yearly fishing allocations have not increased.

This year, the five First Nations were told they could fish 7,724 chinook, which amounts to just 1.5 fish a person for the 5,000 members of their communities.

COVID-19 brought a new dynamic to the salmon allocations this year, as fewer sport fishers were able to come owing to pandemic restrictions. This means the recreational fleet is expected to catch 15,000 less salmon than was forecast for this year, according to figures provided by the department.

None of this surplus is going to the First Nations.

“As per approved management plans, the Area G [commercial] harvest is adjusted based on the projected recreational harvests which results in an increase of 15,000 for 2020,” department spokesperson Athina Vazeos said.

Fisheries Minister Bernadette Jordan was unavailable for an interview, but her spokeswoman, Jennifer Kuss, noted the improvements made in giving the five nations a higher priority in the yearly salmon catch allocations, as directed by the courts.

“This change ensures that food, social, and ceremonial [fishing] continues to be prioritized first, and additionally prioritizes the Five Nations rights-based sale fishery over the recreational and commercial fishery,” Ms. Kuss said in a statement.

The Nuu-Chah-Nulth First Nations argue Ottawa could have provided some of the unused catch from this year to their people to help them support their remote communities. But Mr. Atleo said fisheries officials would not even engage in discussions about it.

“The government is trying to say they consult with us, they negotiate with us. They create their fishing plans, put it on the table and it’s like take or leave it,” Mr. Atleo said.

“All we want to do is be part of the economy, part of looking after ourselves without depending on government. We don’t think that’s a lot to ask.”

NDP MP Gord Johns, whose riding takes in the West Coast fishing shores, said he finds it “disgusting” the Trudeau government has repeatedly highlighted its desire to restore the Crown’s relationship with Indigenous peoples but has still fought many legal battles with these nations over their fishing rights.

“Indigenous people in our communities rely on this fishery for their economy, for their food security, for their culture. It’s part of their way of life. These are salt water people and they rely on the salmon and to be denied their right is shameful, it’s disgusting that the government is taking this approach.”

The First Nations are calling on Ottawa to revisit its decision on the surplus salmon for this year to allow them a portion of the additional catch.

“The government has an opportunity to fix this with these [surplus salmon] to come with a fair opportunity to exercise their commitment, in the judge’s words, for a generous allocation to the nations and to start moving forward with reconciliation,” Mr. Johns said.

The minister’s spokeswoman says Ms. Jordan takes any allegations of systemic racism “very seriously” and that Ottawa is working with the five nations on a reconciliation agreement on fisheries resources, which is intended to broaden their access in the area, Ms. Kuss said.

“The road to reconciliation is a long journey, and Canada is committed to moving forward together. The department has spoken with the five nations on the reallocation of [salmon catch] on multiple occasions and that open dialogue will continue.” 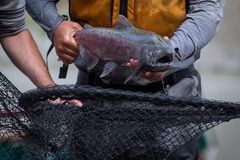 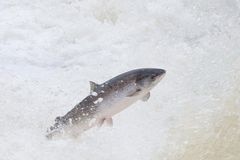 ‘Salmon cannon’ up and running at B.C. landslide, though fish slow to arrive this year
June 24, 2020