Former B.C. Green Party leader Andrew Weaver says he’s supporting NDP Leader John Horgan in the upcoming provincial election, a high-profile endorsement that comes as his Green successor accuses Mr. Horgan of rewriting history for saying his collaboration with the party was holding back his agenda.

In a campaign speech on Thursday in Maple Ridge, Mr. Horgan maintained that he called an election because he needs a majority government to provide stability during the health crisis. He said the collaboration with the Greens that propped up his government for more than three years was impeding NDP plans, such as a promise from the last election of $10-per-day daycare.

But Sonia Furstenau, who took over as leader 10 days ago, said the Greens worked with ministers to build quality, universal early childhood education in late 2018, and that they were prepared to continue.

“John Horgan and I both studied history, but I’m not interested in rewriting it,” she added. “He should stop trying to rewrite history.”

“Do I think Mr. Horgan deserves another term? I certainly do,” said Mr. Weaver, who has lately sat as an independent in the legislature and been at odds with his former party. He is not seeking re-election after seven years as an MLA.

“We worked so collaboratively over three years that it would be very difficult for me to wear an antagonism hat and campaign against him.”

Mr. Weaver, Ms. Furstenau and Adam Olsen were the three Green MLAs elected in 2017. The Liberals took 43 seats to the NDP’s 41, but Mr. Weaver signed an agreement with Mr. Horgan for the parties to work together and not trigger an election before the fixed date in October, 2021.

In a news release in May about the third anniversary of the pact, Mr. Horgan’s office noted that “although the agreement did not anticipate a pandemic, it has provided British Columbians with a strong, stable government at a critical time and has positioned the province to face the challenges ahead.”

Mr. Weaver said he has been impressed with the government’s response on COVID-19 and economic and social issues. ″[Mr. Horgan has] done a really good job."

The childcare promise was a key plank in the NDP’s 2017 platform, but Mr. Horgan said on Thursday his government did not fulfill it because it didn’t have the support of the Greens. Instead, he said his government worked on a plan to open 20,000 new child-care spaces, start a childcare pilot project and take other measures.

“Politics is about the art of the possible,” he said.

On Thursday, Mr. Horgan acknowledged it will be a challenge to attack the Greens after working with them.

“Certainly, Andrew Weaver and I knew that when we signed the. . . agreement back in 2017, there would be a time when we were asking voters to support us as individuals,” he said.

Mr. Weaver said he is not “dissing” the Greens, and B.C. politics has room for three parties. He said his advice for the BC Greens is to articulate what they would like the party to be. “That’s what people want to hear.”

On Thursday, Ms. Furstenau said that process is under way, but the sudden election call rattled the party.

In a news conference, she acknowledged it has been tough to rally prospective candidates for the Oct. 24 vote. She said she did not know the number nominated at this point in B.C.'s 87 ridings.

She said the Greens have a platform committee developing a document that will diverge from those of other parties through such measures getting rid of subsidies to the oil and gas industry, and supporting a clean-energy economy.

BC Liberal Leader Andrew Wilkinson called the NDP’s child-care pledge in the 2017 election “a slogan.” He said the NDP failed to provide the promised 24,000 spaces.

Mr. Wilkinson, also in Maple Ridge, where his party lost the two local ridings in 2017, stressed that the Liberals want to provide day care that is reliable, accessible and affordable. 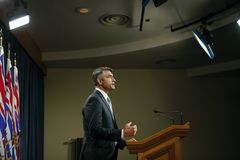