Police say four people are dead and a fifth is being extracted from the rubble after a construction crane toppled off a 25-storey residential tower in downtown Kelowna, B.C., but the cause of the collapse remains unknown.

RCMP Inspector Adam MacIntosh said Tuesday morning that four men associated with the work site died from their injuries – three on scene and one in hospital – while a fifth person is buried in the rubble and also believed to be dead.

He said police are working with the BC Coroners Service, WorkSafeBC, the local fire department and engineers to dismantle portions of the crane and recover that individual.

“Yesterday was a tragic day to see all those workers standing there, and knowing that they just lost some of their friends and coworkers, and to see the families and what they were dealing with,” Insp. MacIntosh said during a news conference. “I can only imagine what they’re going through.”

The top of the crane fell from the construction site at about 11 a.m. on Monday, striking a nearby business and a seniors’ home. It forced much of the downtown core of Kelowna to be closed and the surrounding area to be evacuated. The city also declared a state of emergency.

Insp. MacIntosh said when the incident occurred, workers were in the process of getting ready to dismantle the crane. He said the crane operator is believed to have been among the victims, but officers must still complete a preliminary investigation.

Samantha Pinto, a spokesperson for WorkSafeBC, said in an e-mail that an investigation to determine the cause of the collapse and any contributing factors has been launched.

“WorkSafeBC is still in the early stages of its investigation, and it would be premature to speculate on cause at this time,” she said, adding the investigation aims to prevent similar incidents from happening in the future.

Police have not identified any of those who died in the collapse, but a GoFundMe page established on Monday stated Pam and Steven Zook from the Edmonton area lost their son Jared Zook in the tragedy.

“Our family is devastated by the loss,” reads the online fundraiser page, which aims to cover the costs of a funeral, travel and other expenses. “Our lives are infinitely better for having him be apart of them.”

At a news conference Monday, Jonathan Friesen, CEO of the Mission Group, the developer for the site, said the victims were not his employees but employees of subcontractors.

“The Mission Group staff and all of our subtrades are in a state of shock today,” he said. “It’s not common to see this kind of thing happen on any job site.”

Mr. Friesen said at least 100 people were on site when the collapse occurred Monday and that counselling services were made available to them immediately after the incident happened.

Corporal Jocelyn Noseworthy said one other person was injured and transported to hospital but they have since been released. She said officers haven’t been notified of any other injuries.

Police said they are hoping to open up most of the roads closed by the collapse before Wednesday. 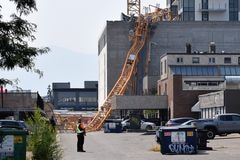