Chris McDonald can’t escape skyrocketing gas prices. As the owner of Vancouver Rush Courier, he is clocking 300 kilometres a day in his thirsty Chevy TrailBlazer. Gas prices have climbed over the past six weeks to record highs, and now he is going to have to ask his customers to share the pain.

“We are going to have to raise our rates.”

And the forecast calls for more pain at the pumps.

Alberta Premier Jason Kenney this week proclaimed legislation that would allow his province to “turn off the taps” on gas shipments to British Columbia, escalating the dispute over the Trans Mountain pipeline expansion and turning up the heat on B.C. Premier John Horgan’s government.

Mr. Horgan, who promised to make life more affordable for British Columbians, is already facing strong pressure to provide relief to motorists. Alberta supplies as much as 80 per cent of B.C.'s domestic fuel needs — and there are no easy alternatives. Stopping gas shipments would deliver a crippling blow to B.C.'s economy.

The BC Liberal Opposition says the government should drop its opposition to the pipeline to mollify Mr. Kenney and cut gas taxes to boot.

“It’s John Horgan’s fault we have the highest gas prices in North America,” the BC Liberals have been blasting out on social-media channels. They’ve even bought billboards featuring a gritty image of the Premier to reinforce the message that if you are unhappy about the price at the pumps, you should “Blame John Horgan.”

But there is no single reason for escalating gas prices, and there are no simple solutions.

“Right now on the West Coast we have the perfect storm of issues,” said Jason Parent, vice-president of consulting of the Kent Group Ltd., a Canadian fuel analytics firm.

Since the start of April, the steady climb of gas prices in some parts of B.C. can be attributed to a range of reasons – some seasonal, some regulatory – but much of it is driven by the marketplace: Demand is high, and supply is limited because of the region’s limited pipeline and refining capacity.

None of it is expected to get better any time soon.

Mr. Horgan has asked his deputy minister, Don Wright, to explore regulatory options to curb what he describes as outrageous gouging by gas companies. The Premier has expressed his frustration over the fact that when his government increased the carbon tax by roughly one cent a litre on April 1, gas prices jumped significantly more in response.

The Kent Group’s data show Vancouver drivers are paying far more to gas companies than most Canadians. The gross revenue collected by the refineries in the Vancouver market is 42.7 cents a litre, more than double the Canadian average of 20.8 cents.

Mr. Horgan says the long-term answer is to have more refining capacity to meet demand. It’s a tough sell, to demand the industry invest billions in new refining capacity when his government wants to freeze the amount of crude oil transported through the province.

In the short term, Mr. Wright is studying options that include directing the B.C. Utilities Commission to control gas prices or imposing broad reporting requirements to ensure consumers know who is profiting at the pumps – a measure similar to the disclosure provided in Washington State.

Alternatively, B.C. could offer rebates to consumers while prices remain high – even though the price spikes are regional and mostly felt in the Lower Mainland and in communities on Vancouver Island.

Or the province could reduce the taxes the government collects on fuel sales — a measure that is unlikely unless the government can somehow extract a guarantee that the difference wouldn’t get swallowed up by the gas companies.

To weigh the options, Mr. Wright has to look at why — even without Alberta turning off the taps — prices have jumped in some communities.

Here are the key factors:

By industry standards, the Lower Mainland’s only refinery, the Parkland facility in Burnaby, is operating well, running at 92 per cent of capacity. But it cannot come close to meeting domestic demand. Parkland brings in 55,000 barrels of oil a day and from that produces gasoline, diesel and jet fuel. (Husky Oil in Prince George, the only other B.C. refinery, can process 12,000 barrels a day.) But British Columbians consume 214,000 barrels a day of refined petroleum products.

Most of the province’s supply comes from the Trans Mountain pipeline. About 10 per cent comes from U.S. refineries.

When the Alberta government first threatened last year to stop shipments to B.C. in retaliation over the pipeline dispute, B.C. officials suggested their province would simply replace Alberta fuel with gas from Washington State.

But that is not an option right now: Supply challenges in the U.S. Pacific Northwest began to drive up wholesale gasoline prices in March.

“No one is immune from it,” said Dan McTeague, senior petroleum analyst for GasBuddy.com. “What makes the situation a little more dire in the Lower Mainland and Vancouver Island is the reality that we don’t produce enough fuel in our own backyard to meet our own domestic need, so we are constantly looking at other markets to supply, and right now supply is tight. It’s economics 101." 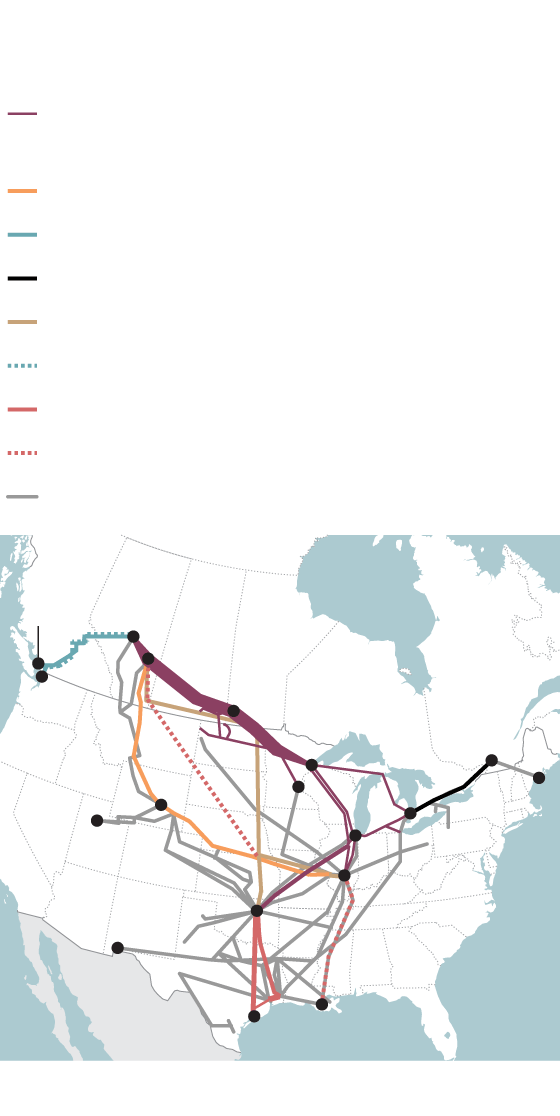 Enbridge pipelines and connections to the

Proposed pipelines to the West Coast 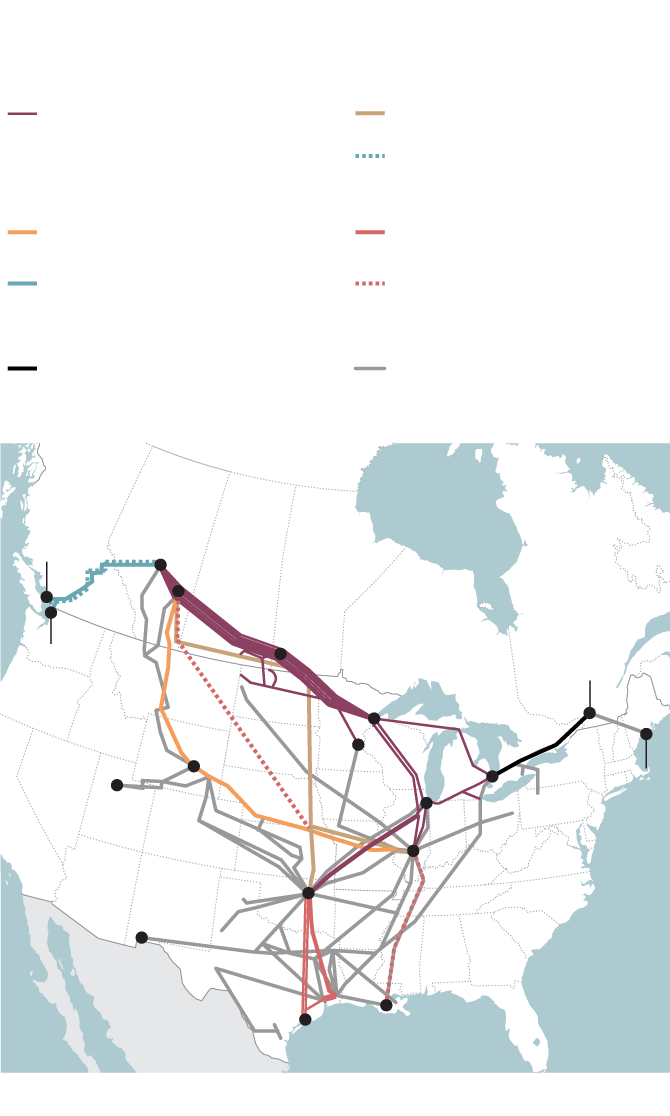 connections to the U.S. 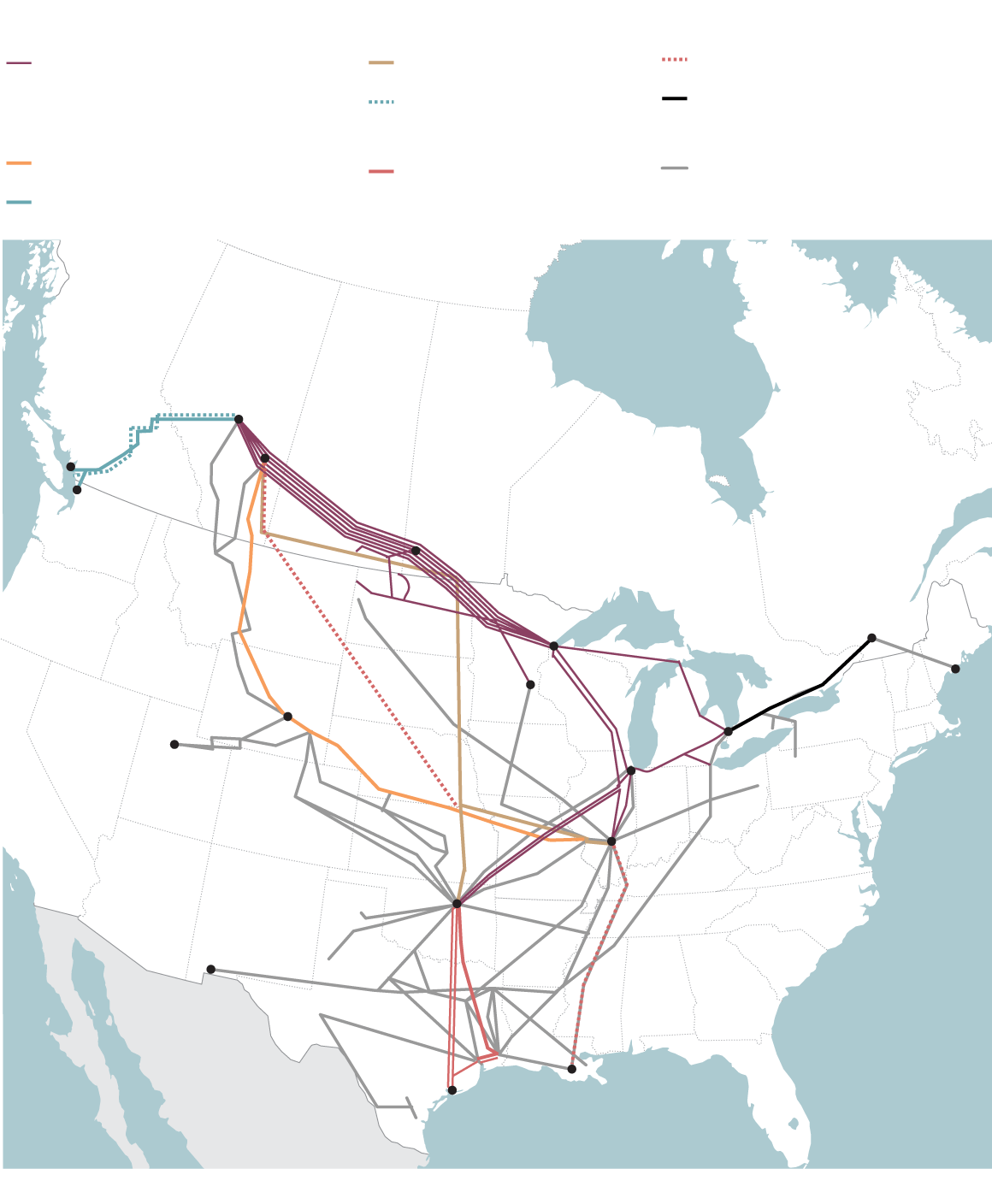 connections to the U.S.

Prices at the pumps jumped in B.C. on April 1, when the government raised the carbon tax by 1.2 cents a litre.

That’s a small increase, Mr. McTeague said, but just part of a much bigger picture: “Vancouver is the highest gas tax jurisdiction in North America.”

In the Vancouver area, the total provincial tax on a litre of gas is 34 cents. That includes almost nine cents for the carbon tax, but the largest share goes to pay for public transit – a 17-cent levy for TransLink, the transportation authority. That tax means residents in Fort St. John don’t end up paying for Metro Vancouver transit projects such as the Broadway Subway and rapid transit in Surrey.

In the Victoria region, the transit tax is lower and the total tax is 29 cents a litre. In the rest of B.C., where there are fewer public transit services, the provincial tax burden is just 23 cents a litre.

This week in the legislature, the B.C. government decried the high premiums Vancouver drivers pay to refineries. But part of that higher margin collected in Vancouver gas stations includes the buried cost of the province’s low-carbon fuel standards.

The requirement, imposed by the BC Liberal government starting in 2010, has gradually decreased the average carbon intensity of fuels sold in the province, but it has also gradually increased the cost of fuel throughout Western Canada, as refineries adapt their product to comply with B.C.’s requirements.

Mr. Parent of the Kent Group said it amounts to a hidden tax: “There are compliance costs associated with that, for the refinery. Those costs are difficult to pin down because they are inside the refiners’ price, but it does push up refined product prices in B.C.”

Winter fuel has more butane, an inexpensive additive. Both in Canada and the United States, regulations limit the amount of butane in the mix for warmer temperatures because it is volatile, which makes producing summer gas more expensive. It’s a cost that is, naturally, passed on to consumers.

Three weeks from now, both Canada and the United States kick off the summer driving season on the May long weekend. And gas analysts say you can just about set your watch to the corresponding jump in gas prices. “Gas prices tend to go up in the spring and summer, and that’s related to increases in demand. More people are out driving. So higher demand with limited refining capacity and supply usually creates upward pressure on price,” Mr. Parent said.

In early April, Mr. Horgan hinted that relief might be possible, setting expectations that he would do something to lower gas prices. A month later, he says that’s not easy.

“We have to keep working every day to make sure that we’re not leaving any stone unturned to try and relieve the pressure that consumers are seeing right now," he told reporters this week. “But most analysts will tell you that it’s a variety of factors, virtually all of them, out of our control.”