A University of Victoria astronomer and his colleagues have opened a rare window into cosmic history by discovering that many members of a distant cluster of galaxies look surprisingly evolved, despite having been glimpsed at a tender age.

The finding adds a new wrinkle to the puzzle of precisely when the first stars and galaxies emerged from the primordial hydrogen and other elements that permeated space shortly after the Big Bang, during a period known as the “dark age.”

“[It’s] almost like time travel,” said Jon Willis, an associate professor who led the study, published last week in the journal Nature. “We’re seeing the light coming from this galaxy cluster when the universe was much younger.”

Due to the finite speed of light, astronomers have the ability to view the universe as it appeared in the remote past simply by looking deep into space. But because the universe changed more rapidly when it was younger, the most critical stages in cosmic evolution are those that are most difficult for astronomers to access.

To make headway, Dr. Willis and his team used the Hubble Space Telescope and other observatories to zero in on a dense cluster of galaxies located at a distance that is equivalent to seeing it 10.4 billion years back in time. This is well after the dark age, which ended more than 13 billion years ago. However, it is far enough back in time to allow the researchers to estimate the ages of the galaxies more accurately than can be done for galaxies that are closer. (By analogy, it is easier to guess someone’s current age with a dated high-school yearbook photo than with a recent picture.)

Dr. Willis said that even by 10.4 billion years ago, many of the galaxies in the cluster looked more mature than expected, as indicated by their reddish hue.

“So it’s telling us that whatever the universe did in galaxy clusters happened really early on,” he said.

He added that the cluster, as a whole, must be younger than the galaxies that comprise it because of the time required for gravity to pull them together into such a dense aggregation. The team’s results suggest that the assembly process took place gradually.

Michael Hudson, a University of Waterloo astronomer who was not involved in the study, said it was striking how many mature-looking galaxies turned up in the cluster.

He compared the result to archaeologists discovering the remains of one of the oldest cities in the world, and then finding a buried tablet in the ruins that shows “that the city, even then, had already been inhabited for a surprisingly long time.”

In an accompanying commentary published alongside the new result, Nina Hatch, an astronomer at the University of Nottingham, noted that the results must still be “treated with caution,” in part because the presence of intervening dust between us and the galaxies could alter their light in a way that makes them appear redder, and therefore older, than they really are.

Moving ahead, Dr. Willis said he hopes to use NASA’s James Webb Space Telescope – the long-awaited successor to the Hubble, which is set to launch next year – to study the cluster in more detail.

“We’re going to really nail down … that age date much better,” he said. 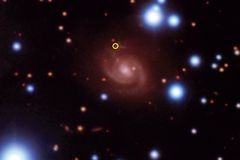