The former leader of Richmond, B.C.’s, RCMP detachment and front-line investigators with B.C.'s gambling agency told a public inquiry into money laundering that they were hamstrung by higher-ups when trying to investigate how a major casino became a hub for suspicious gamblers and loan sharks.

Ward Clapham, who commanded the Mounties in the Vancouver suburb of Richmond from 2001 until he retired in 2008, testified at the Cullen Commission on Tuesday that his superiors nixed a proposal to form a four-officer unit to tackle a crime wave tied to the River Rock Casino opening in 2004. He added that the City of Richmond later ignored his subsequent proposal to increase the detachment’s budget to create a pared-down unit of two officers focused on the casino.

Also Tuesday, Stone Lee, a long-time investigator with British Columbia Lottery Corp., or BCLC, testified that in 2012 his boss Terry Towns, vice-president of corporate security and compliance at the time, told him and two other money-laundering specialists that they were to stop banning suspicious gamblers spending hundreds of thousands of dollars at River Rock.

“I recall [Mr. Towns] said, ‘You guys are not police officers. Cut it out. You should not approach patrons, that’s not your job. Your job is to observe and report,’” Mr. Stone told the digital hearing.

Mr. Stone said the order from his boss was a result of Rod Baker, chief executive officer of Great Canadian Gaming Corp., which owns River Rock, complaining to the provincial gambling agency.

During a cross-examination from Great Canadian Gaming counsel Mark Skwarok, Mr. Lee stood by this assertion but testified that he had no knowledge of the casino executive’s conversations or of him explicitly saying this.

“I make notes everyday since I’ve been with BCLC so, immediately after interaction with Mr. Towns, the note was made that day and Rod Baker’s name was there – it’s in my notes,” he said.

Mr. Skwarok stated that Mr. Baker has never tried to interfere with a BCLC investigation and never told anyone at the agency to stop banning suspicious VIP gamblers.

Mr. Lee’s fellow investigator, Steve Beeksma, testified Monday about the 2012 meeting and to being told by Mr. Towns to stop investigating high rollers. He said he was told instead to focus on reporting any suspicious activity to the special provincial anti-money-laundering enforcement unit, RCMP and the Financial Transactions and Reports Analysis Centre of Canada.

Mr. Towns is not scheduled to testify at the commission hearings and did not respond immediately to a request to comment Tuesday afternoon.

The provincial government called the inquiry last May after three independent money-laundering reviews, including two by former deputy commissioner of the RCMP Peter German.

Mr. German wrote of a “Vancouver model” of money laundering – a term created by an Australian professor that includes a dynamic in which money is laundered from Vancouver into and out of China and to other locations, including Mexico and Colombia. Mr. German concluded: "High rollers from China facilitate the flight of capital from China using Canadian casinos, junket operations and investment in Canadian real estate.”

In 2015, large cash transactions dropped off a cliff after BCLC brought in new rules allowing investigators to interview suspicious gamblers about the source of their money, Mr. Lee testified. Before that, he said, gamblers were routinely surveilled emerging from nearby bathrooms or hotel rooms with bags of cash after rendezvousing in the parking lot with well-known loan sharks such as Paul King Jin.

BCLC says it has also brought in other measures to control or prevent the flow of dirty money since 2012, including creating an anti-money-laundering unit made up of certified investigators and intelligence analysts.

Great Canadian Gaming, which owns several B.C. gambling sites, has defended the company’s efforts to limit money laundering, telling the inquiry that criticism of the industry is unfounded. 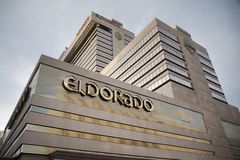 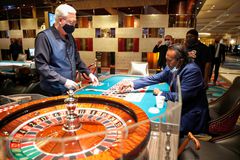