A grieving father told a coroner’s inquest on Tuesday that he and his wife were so desperate to keep their 16-year-old safe and to understand what drugs he may have been taking in the months before he died, that they sought to have the teen committed to hospital under B.C.'s Mental Health Act.

But Brock Eurchuk said that despite their son’s age, a near-fatal opioid overdose and the boy’s involuntary hospitalization, he and his wife were still prevented from learning details of his medical treatment owing to rules that require doctors to keep their patients’ care confidential.​

Elliot Eurchuk died of an overdose in the family home in April, 2018. A forensic toxicologist testified that several drugs were detected in his system, including cocaine, heroin and fentanyl.

The coroner’s jury heard on Tuesday that while Elliot was hospitalized with a blood infection, he overdosed and had to be revived with naloxone. The event was “the hammer on the head” that brought home how serious his son’s drug issues were, Mr. Eurchuk testified.

Elliot was discharged from hospital six days later. His parents thought that having Elliot committed would be a way to keep him safe and to help them learn the extent of his drug addiction.

“I don’t think you can imagine the state our family was in. Against my wishes and common sense, a boy who had died in a hospital bed was discharged … We had no idea what to do,” Mr. Eurchuk told the inquest.

But Elliot's parents learned that despite the involuntary commitment, they were still not able to learn much about their son's treatment.

“My understanding was that we would be legally responsible for saying ‘yes’ or 'no’ to this boy taking an aspirin,” Mr. Eurchuk told the inquest. He was wrong.

Under the legislation, a person can be involuntarily detained and admitted to hospital if he or she meets certain criteria. That can include a physician determining that the person is a risk to himself, herself or others, or that the person has a mental condition that impedes his or her ability to react appropriately to the environment

​At the inquest on Tuesday, Mr. Eurchuk said he and his wife, Rachel Staples, a Victoria dentist, hoped to buy some time to come up with a plan while their son was in a secure psychiatric ward.​

But involuntary commitment under the act doesn’t change doctors’ obligations to maintain patient confidentiality, David Pilley, a lawyer representing doctors in the inquest, said on Tuesday.​

After their son died, Mr. Eurchuk and Dr. Staples pushed for an inquest, citing concerns about the drugs he was prescribed following several surgeries for sports-related injuries as well as difficulties in obtaining information from health-care professionals.

The inquest is expected to last eight days and involve close to 40 witnesses. Coroner’s counsel John Orr told jurors the inquest would not be a fault-finding exercise, but that they may have to determine whether Elliot’s death was accidental or intentional.

On Tuesday, Mr. Pilley went through some of Elliot’s prescription history, using provincial drug records to indicate that the surgeon who performed one of Elliot’s shoulder surgeries did not prescribe opioids beyond an initial prescription.

The inquest is looking into aspects of so-called secure care, especially as it relates to young people and substance abuse.

“It was clear that secure care did not exist in B.C. In every service we looked into, all Elliot needed to do was walk up to reception and say, ‘I would like to file my discharge papers’ [before getting released],” Mr. Eurchuk said.

There have been proposals for legislation to change that, so that troubled teens remain in safe care.

A proposed Safe Care Act in B.C. would provide for court-mandated treatment for children deemed to be at risk from self-harm, addictions, violent behaviour or sexual exploitation.

Liberal MLA Jane Thornthwaite in March reintroduced the legislation, having previously put it forward in 2018. A similar private member’s bill was also introduced in 2017.

At the time the 2017 bill was introduced, then-Child and Youth representative Bernard Richard said his office had recommended the province consider such legislation, with appropriate legal safeguards.

Rules on medical consent can make it difficult for parents to help children who are at risk of abusing opioids, mother tells inquest
June 17, 2019 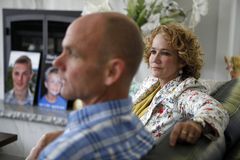