Regions in British Columbia most affected by wildfires are currently reporting more COVID-19 cases per capita than most areas in the country, and some researchers suggest the fires could be driving case numbers.

Interior Health, the region comprising Okanagan, Kelowna and Kamloops, is doubling the four other B.C. health authorities in COVID-19 cases this month for the first time since the start of the pandemic. The south-central region is among the least vaccinated and the one that has suffered the majority of destruction from this year’s wildfires.

On Aug. 20, B.C. Health Officer Dr. Bonnie Henry announced added public health measures for the area to curb the spread, including mandatory masking in all indoor settings, a ban on high-intensity indoor group exercise, and capping outdoor gatherings at 50.

The B.C. Health Ministry said the recent sharp increases in COVID-19 cases in the region have more to do with the spread of the highly transmissible Delta variant and remaining pockets of unvaccinated people than with exposure to wildfire smoke.

But a recent study from Harvard has raised the possibility that there could be a link. Even if there isn’t, researchers and Dr. Henry say the fires are exacerbating local COVID-19 cases. The Ministry has warned residents that wildfire smoke can irritate the lungs, affect the immune system, and make one more prone to lung infections and viruses.

B.C. is living through one of the worst wildfire seasons of its history. Since April 1, 859,000 hectares of land have burned; more than twice the yearly provincial average, and area-wise equivalent to 15 cities of Toronto. The damage is concentrated inside B.C. Interior region, but smoke from the fires has darkened the skies of Central Alberta, prompting air quality warnings in Calgary and Edmonton this summer. Currently, the three provinces with the highest COVID-19 cases per capita are Alberta, B.C. and Saskatchewan, in that order.

Fires have also been an issue further east. In July, smoke from wildfires burning in Northwestern Ontario and Northern Manitoba travelled all the way to major cities such as Montreal, Fredericton and Winnipeg and Toronto. At one point, downtown Toronto logged the highest air pollution figure recorded since the air quality station started reporting in 2003.

The Harvard study, published earlier this month, found strong evidence that particulate matter called PM2.5 coming from wildfire smoke led to a surge in COVID-19 cases and deaths in 2020 in California, Washington and Oregon.

The particles can induce inflammation in lung cells, and can worsen respiratory conditions such as pneumonia, asthma and bronchitis. The researchers found that wherever particulate matter rose for a 28-day period to the concentration much of B.C. has recently experienced, COVID-19 cases increased by 11 per cent and deaths by almost nine per cent.

“Since we know this association exists, we would like to see more action taken from our respective governments to improve wildfire management, try to stem climate change,” said Dr. Kevin Josey, one of the study’s authors and a Harvard Postdoctoral Research Fellow in Biostatistics.

Wildfires have been especially destructive in the Western United States this year, but Dr. Josey said it is reasonable to expect similar associations between PM2.5 particle concentration and COVID-19 cases and deaths in British Columbia.

He said the correlation between wildfires and COVID-19 cases could be due to several factors beyond the fact that both can wage war with the respiratory system. Exposure to fire smoke could make asymptomatic people develop symptoms, resulting in regions registering more cases. Poor air quality could also be forcing people to gather indoors instead of out, creating more high-risk situations for transmission. A higher concentration of PM 2.5 particles could also create thicker air, and could allow the virus to travel farther and infect more people in close quarters.

Dr. Michael Mehta, an environmental scientist and professor at Thompson Rivers University in Kamloops, said the similarity in symptoms from COVID-19 infection and wildfire exposure could also make it more difficult to identify outbreaks in areas exposed to wildfires.

“People don’t know whether to get tested or isolate because lots of symptoms are the same: coughing, breathing issues, sore throat.”

Dr. Mehta said he does not expect the wildfires to attenuate until the winter. Until then, he is afraid for the health of children under 12 who are still ineligible to be immunized, and tend to be vulnerable to fire smoke.

“Children are unvaccinated and most likely to suffer consequences of air pollution because they still have developing lungs, and are most likely to be outside and active,” he said. “I think this combination can be quite devastating.”

For as long as the fire season continues and as cases remain up, Dr. Mehta implores residents to wear proper N95 masks as much as possible, procure a high-efficiency particulate air filter for their home and get immunized as soon as possible.

“The case for vaccination has never been stronger.”

Dr. Christopher Carlsten, the Canada Research Chair in Occupational and Environmental Lung Disease at the University of British Columbia, agrees that the fires probably are not helping to quell the fourth wave. He said all past literature would point to the correlation between PM 2.5 and COVID-19 being a strong possibility, and that even people from neighbouring provinces should take caution.

In Alberta, where the wildfire situation is comparatively better than in B.C. and well below the average in terms of land burned, smoke has been a constant problem for the past two months. Calgary imposed a fire ban in late July not due to the fire risk, but rather because officials did not want backyard fires to worsen the already dangerous air quality.

Yet Dr. Carlsten was cautious about drawing conclusions linking wildfires and COVID-19. The research can be easy to misinterpret, he said, because it does not compare between individuals, but rather between groups, whose COVID-19 numbers could vary from each other for several reasons.

“There are many things that are potentially driving this association,” he said, for example differences in public health measures between regions.

Dr. Carlsten said the Harvard study is not enough for authorities to conclude that wildfires are the cause for the surge in COVID-19 cases in B.C. Still, he added, it would be wise for residents to take their own precautions.

“I think it’s reasonable to take some action on this even though it’s not totally proven.” 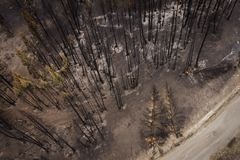 Number of active wildfires in B.C. falls below 250 as cooler temperatures in forecast
August 26, 2021 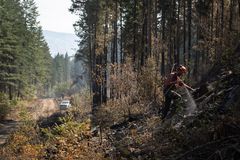 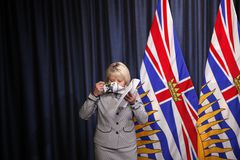