The number of hate crimes reported to police across the country dipped slightly in 2018 from a record high the year prior, with Statistics Canada’s annual report on this ugly phenomena stating the largest decreases were observed in Ontario and Quebec.

The report, released Wednesday, shows there were 1,798 incidents reported to police in 2018, which was a drop of almost a sixth from the previous year’s total of 2,073. But, the federal agency noted, these numbers are still above the annual average of 1,473 hate crimes in the past decade and other studies have shown roughly two-thirds of victims never report such incidents to police.

“Despite the decline, the number of hate crimes remained higher than any other year since 2009 (with the exception of 2017), and aligns with the upward trend observed beginning in 2014,” said a companion analysis by government researcher Greg Moreau.

For the third consecutive year, Jewish people were the most commonly targeted group, at 19 per cent of all incidents, followed closely by black citizens at 16 per cent, according to Statistics Canada. Just 4 per cent of respondents in the 2016 national census reported having a Jewish ethnicity, while black Canadians represented just 3.5 per cent of Canada’s population of 35 million.

The Toronto-based Centre for Israel and Jewish Affairs said the latest data indicate anti-Semitism is still alive in Canada, especially in Ontario – which has four out of the five cities with the highest per capita rates for hate crimes.

“Despite an overall decline in hate crime, incidents targeting the Jewish community remained stable after a sharp spike in 2017,” a news release from the advocacy group stated. “What starts with Jews never ends with Jews. We continue to urge Canadian leaders at all levels of government to take action in protecting our community from the dangers of Jew-hatred.”

Much of the overall decrease in 2018 cases was owing to a 21-per-cent drop in non-violent hate crimes, which made up just more than half of all such incidents. Violent hate crime remained relatively stable, with a decline of 2 per cent, but the number of assaults were up 6 per cent, the report stated.

Quebec had the next biggest decline at 7 per cent, which the report stated was largely a result of attacks on Muslim people being halved from the year before, to 60 incidents. Those numbers jumped in 2017 after a gunman massacred six men at a Quebec City mosque in what a judge later called an act of “visceral hate” toward Muslim immigrants.

Salam Elmenyawi, president of the Muslim Council of Montreal, which oversees the city’s mosques and Muslim institutions, said the federal agency’s annual tracking of these crimes is not an accurate measure of the routine hatred faced by people in his province.

“It’s worth nothing,” Mr. Elmenyawi told The Globe and Mail Wednesday. “It’s just an indication that there are some hate crimes being reported, but, certainly, most hate crimes in Quebec go unreported.”

While police-reported hate crimes decreased in Ontario, Quebec and British Columbia in 2018, there were smaller increases in the Prairie and Atlantic provinces, excluding New Brunswick. Alberta had the biggest spike upward, with 8 per cent more incidents, led by more attacks on Jewish and black people residing in that province.

The vast majority of hate crimes in Canada remain unsolved by police, with just 31 per cent as being marked “cleared” by investigators. That is up slightly from the rate of 28 per cent the year prior, but still lower than the 40-per-cent success rate police typically have solving other crimes.

Police cleared roughly half of the violent hate crimes reported to them compared with just 15 per cent of those non-violent incidents, mostly because investigators have a hard time identifying suspects in mischief cases, Mr. Moreau’s analysis for Statistics Canada noted. 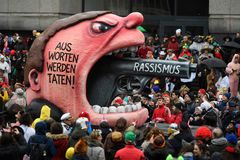 How does the OPP’s past relations with Indigenous peoples affect the current situation?
February 14, 2020 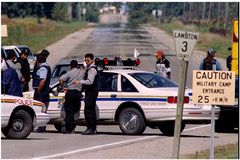