Clara Kan and her mother were just beginning a seaside stroll last week in Richmond, B.C., when two men in a car hurled a racial slur at them and shouted: “Go back to China.”

The women, who were wearing masks, confronted the driver, an older white man, who then revved the engine and lurched the car toward Ms. Kan.

Her 65-year-old mother screamed for help and the men drove off. Ms. Kan immediately reported the incident to the RCMP.

Since the altercation, she says, her mother is scared to resume their daily walks in public parks and only feels comfortable shopping at Chinese supermarkets, where the majority of other shoppers are East Asian.

Ms. Kan is adamant that she will never remain silent about the kind of abuse she, her mother and many other East Asian Canadians are facing.

“What concerns me most is a lot of Chinese people or Asian people they’re like, ‘Oh, let it go, just walk away,’ but I feel like maybe in a way because I was bold enough to confront these racists maybe that’s why physical violence didn’t occur," says Ms. Kan, 33.

What happened to the Kans is one of many cases of harassment against East Asian people that have taken place across the country since the pandemic began. They are being targeted as being responsible for the devastation being wrought by COVID-19, which originated in China.

Vancouver police have tallied 20 hate incidents directed at people of East Asian descent this year to date, compared with 12 recorded in all of 2019.

Many of them are violent, including an incident in March when a white man shoved a 92-year-old East Asian man with dementia out the doors of a busy convenience store. The police investigation into that incident is continuing.

This week, transit police revealed a mid-April incident in which a white man told two East Asian women on a bus to “Go back to your country; that’s where it all started.” When another woman intervened, the man attacked her, ripping a clump of her hair out before he fled. The day after talking about the incident, transit police announced that the 48-year-old suspect in the case had died of an apparent drug overdose a week after the attack.

Hate-fuelled incidents, from racist comments to violent assaults, have been taking place across Canada. Amy Go, president of Chinese Canadian National Council for Social Justice, says immediate action is needed against this wave of bigotry, such as a public-information campaign denouncing it.

“In this heightened climate of hate, something has to be done," Ms. Go says.

Inthida Ngeth, senior vice-president of the North American Association of Asian Professionals (Toronto Chapter), agrees. “This is like nothing we have seen before. As everyone is trying to cope mentally, physically and psychologically with their fears, survival and everything in between – this harassment has created even more anxiety for the Asian community at large,” she says in a statement.

While many police departments reached by The Globe and Mail across the country say they do not keep detailed statistics showing a spike in hate crimes over the past two months, many say they are investigating specific cases of East Asian harassment amidst the pandemic.

In Hamilton, Acting Staff Sergeant Paul Corrigan of the force’s hate crimes unit says a man drove his vehicle into an East Asian man at a gas station in March after a dispute over the victim not moving his vehicle quickly enough. The attacker also used a racial slur. The victim was not injured.

He also cites three other incidents – two involving members of the East Asian community being told to “Go back to your country” and one shout of “You brought this disease here.”

The incidents were not considered criminal offences, but were recorded to create “a truer picture of the extent of hate in our community,” Staff Sgt. Corrigan says.

“There may be more that I am not aware of."

Superintendent Ricky Veerappan of the York Regional Police department, which serves 1.1 million residents north of Toronto, says the force has received a few calls from members of East Asian communities who have been targeted with “nasty racial comments.” No charges have been laid, he says, but officers are asking for victims of abuse to call police.

Montreal police are investigating a wave of high-profile property damage at several Buddhist temples. They are treating the repeated sledgehammering of the lion statues that guard these holy sites as hate crimes because they are religious symbols.

Calgary police heard from the community that there were other hate incidents after the force went public in mid-March with their investigation into anonymous threats made against a Chinese restaurant, spokesperson Corwin Odland says. “We are in the process of following up with them to get details and open investigations as appropriate,” Mr. Odland states in an e-mail exchange.

Adam Palmer, the Chief Constable of the Vancouver Police Department, speaking in his role as president of the Canadian Association of Chiefs of Police, says public awareness and police outreach are key to handling these incidents. “Like many public safety issues, a key to prevention for hate-related crime and incidents is awareness,” he says in a statement.

“It’s important for police agencies across the country to continue to connect with targeted communities to increase comfort with the criminal justice system and decrease any barriers that may exist to reporting these incidents to police.”

Barbara Perry, an expert on hate crimes and professor of criminology at the University of Ontario Institute of Technology, says the incidents targeting East Asian people are part of a broader pattern of anti-Asian hatred that casts Asians as economic and physical threats.

"We saw this in the context of the failure of the North American auto industry in the 1980s, and during the SARS epidemic in the 2000s,” Prof. Perry says in an e-mail exchange. “COVID has exacerbated underlying anxieties around immigration and multiculturalism to be sure, but also the strains of economic uncertainty.”

Non-governmental organizations have stepped in to try to track incidents of hate and spread awareness of their pervasiveness.

Ms. Go’s organization recently began asking victims to submit their accounts of coronavirus-related incidents of discrimination or racism as part of a national project funded by the Department of Canadian Heritage.

The Alberta Hate Crimes Committee has also been running the StopHateAB.ca portal since 2017 to encourage people to report incidents and talk about what happened to them,

Irfan Chaudhry, director of MacEwan University’s Office of Human Rights, Diversity, and Equity, recently analyzed the reports to that site over the past few months and found four incidents of an East Asian Canadian being verbally assaulted in a public space in a tirade related to COVID-19. None of these incidents have resulted in charges, he says.

If a responding police officer does not have the experience or inclination to take the incident seriously, it can deflate the victim and discourage them from reporting similar incidents again, Prof. Chaudhry says.

Nick Jang, 24, says he didn’t even think of calling police about a recent incident on Vancouver’s SkyTrain light-rail system because he didn’t feel threatened in the moment. The fourth-generation Canadian was taking the SkyTrain home from a morning shift volunteering at Vancouver General Hospital’s COVID-19 screening unit when a middle-aged white man walked up to him. The man, he says, told him to go back "to my own country and take the virus with me.”

Ms. Kan took a different approach. She immediately reported the incident involving the RCMP, but felt the officer didn’t take it seriously enough. She vented about the incident on social media and her post went viral. RCMP repeatedly assured the public they were taking the investigation into the incident very seriously and soon found the suspects, who dropped off an apology note addressed to her at the Richmond detachment on Friday morning, according to Ms. Kan, who is now grateful for the help of the Mounties.

Ms. Kan, who immigrated with her family from Hong Kong when she was six years old, says the ordeal has been taxing but it is important to speak up so bigotry is identified and rooted out. 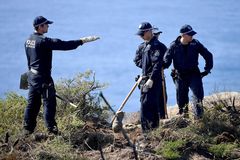 Black district attorney to take over Ahmaud Arbery case
May 11, 2020 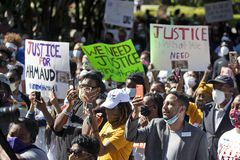 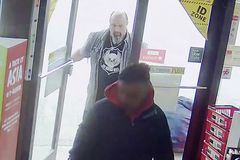 Follow Ian Bailey and Mike Hager on Twitter @ianabailey @MikePHager
Report an error Editorial code of conduct
Due to technical reasons, we have temporarily removed commenting from our articles. We hope to have this fixed soon. Thank you for your patience. If you are looking to give feedback on our new site, please send it along to feedback@globeandmail.com. If you want to write a letter to the editor, please forward to letters@globeandmail.com.
Comments