Health Canada is investigating whether two cannabis companies violated advertising laws when they sponsored a fundraiser last fall for a Toronto-based charity with ties to Bill Blair, the federal minister who oversaw the legalization of the drug.

Canopy Growth Corp., which is one of Canada’s largest publicly traded cannabis companies, donated $5,000 to become a “Gold” sponsor of the Kids, Cops & Computers charity’s Inspiration Night gala at Toronto’s The Carlu event space on Oct. 23 – just six days after recreational cannabis was legalized and strict new rules around advertising came into effect.

Halo Labs, a cannabis extraction company operating in three American states, spent $10,000 to be one of a dozen or so “Platinum” sponsors of the event and have its logo advertised at the entrance along with Canopy Growth. Toronto-based businessman G. Scott Paterson is non-executive chair of Halo’s board of directors and founder of the charity, which lists federal Organized Crime Reduction Minister Bill Blair as its honorary chair.

Based on photos posted online by the charity, it does not appear Mr. Blair attended the October event, where the festivities included high-schoolers talking about how the charity had helped them.

After The Globe and Mail asked about these donations and logo displays on Feb. 25, Health Canada said it had launched a review of whether this incident violated the Cannabis Act.

The advertising rules do not prohibit cannabis companies from sponsoring a person, entity, activity or facility, but that sponsorship cannot be used to promote cannabis and it is prohibited to display a brand element of cannabis, according to Health Canada spokesperson Tammy Jarbeau. The rules do allow for some specific types of promotion in adults-only locations so that these companies can give legal consumers “access to clear, objective information on which to make informed decisions,” she added.

“We are gathering facts and information about the situation to determine whether there may be an instance of non-compliance with the promotion prohibitions ...” Ms. Jarbeau said in an e-mail.

Health Canada said it has followed up with the company to ensure it is aware of the promotions prohibitions, and it understands that Kids, Cops & Computers has removed the names of the cannabis companies from the list of sponsors on its website.

Mark Zwicker, president and chief executive of the charity and the foundation that backs it, said at the time of the event, the Cannabis Act was so new it wasn’t clear whether brand elements could be used.

“It’s a grey area and we don’t want to do anything that would materially affect the charity ... I can assure you that no one that was involved with the charity would have knowingly taken any action that would contravene the act,” Mr. Zwicker said.

Canopy Growth said it is not prohibited from sponsoring an event as long as cannabis is not promoted and that it sponsors charities “as a way to give back to the communities in which we operate.”

“There was no promotion of Canopy’s donation,” spokesperson Caitlin O’Hara said in an e-mailed statement. “The only public mention of Canopy Growth’s corporate donation was the company’s logo on the charity’s donation page and logo placement at the event itself, which was a private event.”

Halo Labs did not immediately respond to a request for comment.

A spokesperson for Mr. Blair, the former chief of Toronto’s police force, did not respond to questions about the sponsorship of the charity he is involved with, but said, in an e-mailed statement, that his government established such strict advertising restrictions to help cut down on its appeal to Canadian youth, who consume the drug at some of the highest rates in the world.

Since legalization, Health Canada said it has issued two warning letters and three compliance letters to companies relating to illegal promotions. The agency can suspend or cancel the federal licence of cannabis firms caught violating the sponsorship rules or issue an administrative penalty of up to $1-million. 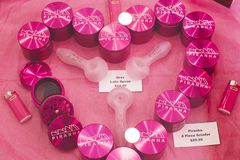 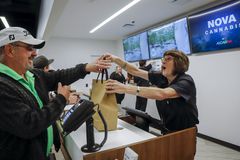