B.C. has taken a hit in the competition to play host to high-profile film and TV projects, with Apple TV+ moving production of its elaborate show See to Toronto.

The first season of the streaming science-fiction series, which reportedly cost about US$15-million for each of its eight episodes, was produced on Vancouver Island in the Campbell River area, at Strathcona Provincial Park and in Vancouver, generating scores of industry jobs.

But producers have decided to shoot a second season in Toronto.

Marguerite Pigott, film commissioner for the City of Toronto, touted See as a big gain for production in Canada’s largest city.

“The Apple TV+ series See Season 2 is one of the largest projects to ever be produced in the Toronto region,” she said in a statement.

“The fact that they chose to produce a show of this scale in Toronto speaks to the high quality of the infrastructure and talent that lives and works here. 2020 is already a major year for productions in Toronto and projects such as See Season 2 have kicked off the year on a high note.”

But he added that, “It’s always a drag to lose a show.”

This particular program was an unusually large project for a B.C. industry that employs about 70,000 people, and, according to the B.C. government, last year contributed $3.2-billion in production spending to the economy.

See is set centuries in the future when humans have lost the sense of sight. The show was a big part of the launch of Apple’s streaming service, Apple TV+, and had its debut on Nov. 1, 2019. According to a report in the Wall Street Journal, the series budget was about US$15-million per episode, on par with the per-episode costs of Game of Thrones.

A spokesperson for the City of Campbell River, which was the focus of production, referred comment to the Vancouver Island North Film Commission, which promotes and facilitates film production in the region.

The organization’s commissioner, Joan Miller, said See required the services of hundreds of workers and millions of dollars in services and goods, ranging from lumber for sets, to hotel rooms across the region, and porta potties, tents, meals and countless other purchases.

“No production, when they are working in the region, will purposely bring things from Vancouver out to the region. They don’t want to pay the transport, so they will always make every effort to buy everything local,” Ms. Miller said.

The story called for a village in the woods, so one was built ahead of shooting from the fall to February, 2019. “It had animals there,” Ms. Miller said. “There were people there day and night who were just there to monitor wildlife activity.”

Producers even found use for a Campbell River-area pulp and paper mill, closed since 2010 after decades of operation. It was refitted as a sound stage for the show.

A spokesperson for Apple declined comment on the decision to move the series. The producers of the show did not respond to a request for comment.

Prem Gill, the head of Creative BC, a counterpart to Ontario Creates, said it was her understanding that the series moved on because it needed new urban locations.

“In Season 2, the next setting is supposed to be a postapocalyptic Pittsburgh, so for that look and feel, they have made the decision to go elsewhere,” Ms. Gill said.

She said the good news is that production of See showed that crews outside the Vancouver region can effectively facilitate the production of a show, something that may make the case for future projects.

B.C. Culture Minister Lisa Beare took the loss of the show in stride. “Productions make decisions based on their creative needs, such as location or geographic look. Today, there are 29 series and 2 pilots filming in our province," she said in a statement issued by her office. "We remain the largest motion picture hub in Canada and I’m confident that TV production in B.C. will continue to thrive. ”

Ms. Miller said she was more pragmatic than disappointed about the whole situation.

“It would have been nice to see it stay in British Columbia, but our industry is competitive,” she said.

“We always look at the positive. There are going to be other seasons. Maybe the third [season] will come back.” 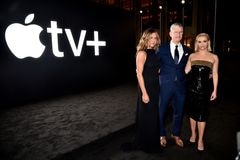 Apple TV+ may struggle to keep up with Netflix once free one-year subscriptions expire
September 11, 2019 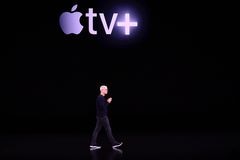 Amazon making nice, prepares sales of Apple TV, Chromecast
December 15, 2017
Follow Ian Bailey on Twitter @ianabailey
Report an error Editorial code of conduct
Due to technical reasons, we have temporarily removed commenting from our articles. We hope to have this fixed soon. Thank you for your patience. If you are looking to give feedback on our new site, please send it along to feedback@globeandmail.com. If you want to write a letter to the editor, please forward to letters@globeandmail.com.
Comments