When Wong Kee-kwan started his political cartooning career in the 1980s, China was negotiating with Britain about transferring the sovereignty of Hong Kong. The city’s fate was unknown.

Over nearly four decades, Mr. Wong, better known as Zunzi, caricatured China and Hong Kong’s political leaders, and covered most major events in the city and on the Mainland, from the signing of the Sino-British Joint Declaration, the Tiananmen Square massacre, the 1997 handover, the Umbrella Movement and the current anti-extradition protests in Hong Kong.

Zunzi cartoons, which appear in the publications Ming Pao and Apple Daily, have captured a gradually opening China, when leader Deng Xiaoping initiated economic reforms, and witnessed it become increasingly authoritarian under President Xi Jinping, who has been trying to tighten Beijing’s grip on its semi-autonomous territories, a major reason for Hong Kong’s current political upheaval.

In the midst of this crisis, Mr. Wong has brought prints of more than 100 of his cartoons to Toronto and Vancouver, with a quarter of them illustrating the anti-extradition movement.

He explained in an interview that his work documents the city’s political changes over the years, and could help viewers comprehend the current turmoil.

“If you want to know the whole picture, then you should know that behind [the scenes] story,” he said.

“It’s really a difficult time for us. It’s a repetition,” he said, adding that ordinary people may feel what happens in Hong Kong is the same every week: Protesters take to the streets and destroy things. But he said he and other artists try to convey the message that is below the surface.

Although China has “signed the Sino-British Joint Declaration and given us the Basic Law, they never think of really giving Hong Kong full democracy,” he said.

Mr. Wong joined Ming Pao after he graduated from the Chinese University of Hong Kong in 1978. Later, Apple Daily picked up his work. He said he feels thankful the editorial teams of both publications stand “quite firm on democracy,” so his work can continue.

One exhibit will be shown in Vancouver from Sunday to Tuesday. Another one started on Nov. 1 at York University in Toronto.

The York show, which runs until Nov. 17, was organized by Wendy Siuyi Wong, professor in the department of design and a long-time follower of Zunzi cartoons.

Prof. Wong said when she was growing up in Hong Kong during the 1980s, she would check out the cartoon every day in Ming Pao.

“His work was really able to capture the most important news of that day,” she said.

One of Mr. Wong’s most high-profile cartoons shows a duck being chased through a tunnel from a rectangle cage to an oval one. The caption is “Transition,” and the piece represents the handover of Hong Kong from Britain to China.

Mr. Wong said it illustrates that Hong Kong was moving from being a colony of Britain to strong control by China.

“We are being locked up," he said. "We don’t have the total freedom we’re asking for, in the past and the future.”

He said Beijing has never warned him about his work, but he doesn’t rule out the possibility.

“I can go to jail for cartoons."

Prof. Wong said she prefers the Zunzi drawings that are more graphic and conceptual to the well-known satirical ones.

One of her favourites is called “Hong Kong democracy heading dead end.” The 2014 cartoon features a Hong Kong island image that is moving toward a narrow and dark tunnel. At the entrance of the tunnel, a sign – with Chinese characters that say “universal suffrage” and an English caption saying “democratic election” – points to a dead end.

“So this is really reflecting what has been happening in Hong Kong. What Hong Kong has been promised of the universal suffrage now is going to a dead end,” Prof. Wong said.

She added that Western people need to see the cartoons, which record the deteriorating freedoms and strengthening censorship in Hong Kong.

Mr. Wong said good cartoonists need to be able “feel the pulse of the city.”

“Every day, you continuously feel the heartbeat, feel the atmosphere and draw cartoons representing what has happened in the last 24 hours.”

He didn’t think his work is that outstanding, but said his cartoons seem to have “more to say.”

He reads about 10 newspapers a day, but still panics from time to time that he might not deliver the best message of the moment.

“You have to know a little bit more than enough before [you] can do something for the audience.” 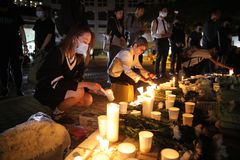 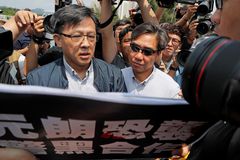 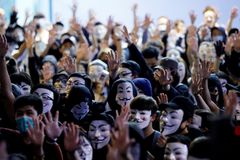