On the evening of July 21, 2019, a mob wearing white T-shirts and wielding sticks attacked pro-democracy protesters in Hong Kong. In Toronto, artist Ricker Choi was shocked, angered and sad.

The Hong-Kong born Mr. Choi, who has a day job as a financial risk management consultant, began painting pictures related to the demonstrations, reaching back to the movement’s beginnings in mid-2019. The paintings now amount to 30, depicting significant events in the protests, and Mr. Choi is selling prints of some in an effort to raise money to help Hong Kong democracy activists who are fleeing to Canada for fear of persecution in China.

“It is very scary times in Hong Kong, so I think we should be doing something to help the people who are able to successfully escape and come to Canada,” said Mr. Choi, 45, who has been painting since 2013.

Many Hong Kongers who participated in the months-long uprising against Beijing’s tightening control have fled the former British colony for Western countries such as the U.S., the U.K. and Canada. Anxiety among these activists rose after Beijing imposed a new national-security law on Hong Kong in the summer that criminalizes dissent and protest with penalties of up to life in prison. This law also applies to alleged offences against Hong Kong committed outside the region by a person who is not a permanent resident of the city.

Mr. Choi has chosen four of his paintings for the fundraiser. One of them, called The Kiss, is based on a photo taken by a Reuters correspondent showing a young masked couple kissing after riot police fired tear gas. Another painting, called Save 12 HK Youths, shows a drowning person making hand gestures of the number one and five, a reference to the protesters’ slogan “Five demands, not one less.” The painting is an interpretation of an August, 2020, incident in which a dozen youth from Hong Kong were detained in China after trying to flee to Taiwan.

Mr. Choi, who immigrated from the Asian financial hub to Canada in 1988, said he paid little attention to Hong Kong’s politics before an extradition bill triggered the protests. After seeing two million people in Hong Kong march in the streets, he said “something clicked and really moved.” Since then, he said he has followed the Hong Kong situation closely and participated in Canadian events aimed at demonstrating solidarity with the activists.

“We saw what happened in Hong Kong, the total suppression of the pro-democracy movement,” he said. “I felt angry, extremely angry.”

Mr. Choi said he will donate the money to a fund set up by the Vancouver Society in Support of Democratic Movement. The group’s chair, Mabel Tung, said her organization has been collecting money to aid asylum seekers from Hong Kong since last year. So far, the organization has received more than $60,000, with more than half of it spent on current refugee claimants.

The money raised through Mr. Choi’s art sale will be directed to the next wave of claimants, who Ms. Tung anticipates will arrive after pandemic restrictions are eased and Canada’s border reopens.

On Nov. 12, the federal government announced new measures to help young Hong Kongers come to Canada quickly on work and study permits, and new ways for them to stay permanently. Under the initiative, Canada will waive the usual one-year wait for failed asylum claimants from Hong Kong to have their claims reassessed.

“We just want to prepare for the next wave of people coming in once the gate is open. I’m sure because of all these policy changes that a lot of people from Hong Kong will come to Canada,” Ms. Tung said.

The new federal arrangements didn’t clarify whether being arrested or charged in connection with the protests that started last summer would disqualify applicants for asylum. However, Immigration Minister Marco Mendicino has said Ottawa will not deny entry to anyone charged under the new national security law.

Relatively few charges have been laid under the legislation, but more than 10,000 Hong Kongers have been arrested in relation to the protests, and more than 2,000 face other charges, often for “rioting.”

Ms. Tung praised the new measures, but she and many other activists and advocates in Canada want the federal government to offer more help to Hong Kongers who may face political persecution.

Ms. Tung said she hopes Ottawa will issue essential-travel visas to the activists so they can flee the city soon.

This fall, after Canada began to accept refugees from Hong Kong, China’s ambassador, Cong Peiwu, warned Ottawa that accepting these people, whom he described as violent criminals, would put “the good health and safety” of 300,000 Canadian passport holders and companies in Hong Kong at risk.

Ms. Tung’s organization helped a young activist settle in Vancouver earlier this year. The Globe and Mail is not identifying the activist because he is concerned about being targeted by the Chinese government. The activist, who is in his early 20s, said he decided to leave Hong Kong last October, after several of people who participated in the protests with him were arrested and charged.

He said it wasn’t an easy decision, because his family is still there, but he felt hopeless about the future of his homeland.

“I am afraid of political prosecution, so I came to Canada,” said the protester, who was among the nearly two million people marching on Hong Kong streets last June.

The youth, who is applying for refugee status, just got an entry-level job in Vancouver. He said friends introduced him to Canada.

“They said Canada is a safe country.”

Ken Tung, who is also with the pro-democracy society, said his group and several other organizations led by Canadian Hong Kongers have also been helping the asylum seekers from Hong Kong in other ways.

He said many have volunteered to provide the activists with housing, help them get a job, and find counselors to deal with traumas.

“The Hong Konger community actually [gave] a lot of helping hands,” Mr. Tung said. “I think we’re here to support them to build a new life.” 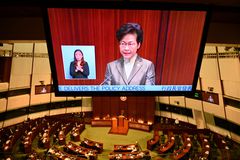 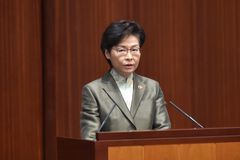 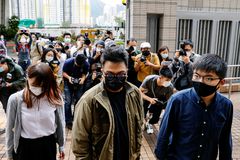