Tensions from protests in Hong Kong appear to be spilling over onto campuses around the world, including a university in British Columbia, where a student-organized campaign supporting Hong Kong demonstrators was disrupted.

Last week at Simon Fraser University’s Burnaby campus, Hong Kong international students and peers who have ties to the territory put up a “Lennon Wall” – a message board full of posters and colourful sticky notes that mainly express solidarity with Hong Kong’s demonstrators. According to some students, these notes, bearing messages such as “Stay with Hong Kong” and “Fight for Hong Kong,” were partly torn down three nights in a row.

There also was unrest at a university in Australia last week, where disagreements on the Hong Kong political turmoil turned violent. As seen in footage circulated on social media, punches were exchanged at the University of Queensland between pro-Beijing students and those who back the Hong Kong protesters, who began marching to oppose China’s proposal to extradite criminal suspects to the mainland.

Some SFU students from Hong Kong said they were disappointed to see those notes being ripped off.

“When the wall got destroyed, [I was] not surprised, but I am just disappointed, really disappointed,” said Michael Chan, president of SFU Hong Kong Society, who is familiar with the incident even though his group didn’t start the wall.

Mr. Chan said damaging the wall infringes on freedom of speech, and he calls on the university to protect such rights on campus.

Taylor Cheng, who left a note on the wall, said she hopes the vandals would express their opposition in a more respectful way. “I thought everyone could communicate in a civilized, well-mannered way,” she said, adding the incident has been reported to the university.

Rummana Khan Hemani, SFU’s vice-provost and associate vice-president of students and international pro-tem, said the university expects students to express their views in a lawful and respectful manner. “We do not know if these specific posters were approved to be posted. However, the removal of approved posters or unapproved posters in a disrespectful manner is not acceptable,” she said in a statement.

So far, it is not clear who damaged the wall. Both Mr. Chan and Ms. Cheng have seen screenshots from a large SFU student group chat on WeChat that some students are critical of such campaigns and condemned Hong Kong separatism.

The incident has left Mr. Chan and Ms. Cheng with concerns that if tensions escalate on their campus, there may be violence similar to what happened in Queensland. “I don’t want SFU to become the second University of Queensland incident,” Ms. Cheng said.

Mr. Chan said he is worried that some messages on the wall may irritate some students from mainland China who may hold different views on the issue. “They may be angry. ... I am worried this kind of [violent] situation may happen,” he said.

William Chen, a third-year student at SFU who is from mainland China, said the Lennon Wall campaign generates “a barrier” between him and some of his Hong Kong friends.

“My first reaction was sad rather than angry,” he said. “The conflicts in Hong Kong happened because some Hong Kong people are unsatisfied with some policies set by China. [But I wonder] who spread the anger to here.”

He said the campaign does not represent the views of all students from Hong Kong and may increase the tension between students from the territory and mainland. He further added that some mainland Chinese students may think these messages encourage Hong Kong independence.

Jia Tiancheng, a student from Douglas College in the Vancouver area, said if the posted notes are purely showing support for the protesters, then they’re acceptable. But if some contain radical political opinion, then it’s just “expressing rage."

Mr. Jia, who is from Harbin, a city in northern China, said since the extradition bill has been suspended, Hong Kong protesters should have achieved their goal. But the continuing protests that demand the resignation of the city’s leader, Carrie Lam, and the complete withdrawal of the bill doesn’t benefit the city.

Students from Hong Kong and mainland China all expressed their longing for more understanding and communication.

“Hong Kong students are fighting against the extradition law, and is not trying to fight for Hong Kong to become an autonomous country, nor are we attacking Chinese people, “Ms. Cheng said.

“Hong Kong students welcome dialogue and discussion. We are not going against the fact that there will be different political stakes on the issue.”

Mr. Chen said many students from mainland China usually do not care about political issues, however, in this case, he agrees that some mainland Chinese students believe Hong Kong people are using protests to promote Hong Kong independence.

“They find it surprising: why Hong Kong wants independence,” he said.

“There has to be a good communication between students from Hong Kong and China, otherwise, the conflicts are inevitable.” 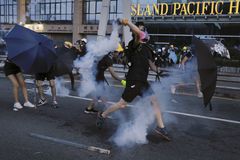 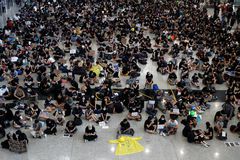