The Huu-ay-aht First Nation on Vancouver Island has little patience with the current protests against old-growth logging. Forestry is the community’s main path toward economic independence, and outsiders of any stripe telling it how to travel that road are not welcome.

Members of the First Nation voted on April 10 to expand their stake in Tree Farm Licence 44, a partnership with Western Forest Products that has been decades in the making. Through Huumiis Ventures, they now own 35 per cent of the TFL and aim to buy a controlling share by 2023.

The profits are paying to supplement the income of elders and financially supporting the community’s postsecondary students. As well, in a community of 750 people, there are 44 people now employed in the industry.

“Even protesters have to respect the territory of the people – it’s [the Huu-ay-aht] that should decide how their lands are managed. It shouldn’t be determined by outside sources,” the nation’s Chief Councillor, Robert J. Dennis Sr., said in an interview.

On Tuesday, the B.C. government announced its new forestry plan, proposing to double the amount of timber harvesting rights now held by Indigenous communities in the province. The policy change is designed to advance reconciliation, but it does not alleviate the continuing conflict in British Columbia over old-growth logging.

There are more than 5,300 Indigenous people directly employed in the forest industry in B.C., according to a 2019 study by the Council of Forest Industries, while business agreements and stewardship partnerships deliver about $250-million in economic benefits annually to Indigenous communities.

B.C.’s forestry plans will mean forestry companies with timber harvesting rights will have to negotiate more partnerships with First Nations and other smaller forestry enterprises, or the province will impose tenure transfers. Currently, Indigenous communities have a stake in about one-tenth of the annual harvest in B.C., and the government’s intent is to increase that share to 20 per cent by the year 2023.

Some of the communities are indirectly involved in forestry: There are 120 First Nations that have forestry revenue-sharing agreements with the province. That includes the Pacheedaht First Nation, whose territories include TFL 46, where most of the Fairy Creek protests are focused and where more than 150 people have been arrested since May 18.

Other First Nation communities are more directly vested. West Moberly First Nations and Canadian Forest Products jointly hold timber licences in the Fort St. John timber supply area. There are other types of partnerships: The City of Quesnel is working with five local First Nations in a community forest agreement. In the Prince George timber supply area, the province stepped in last month and gave the Carrier Sekani Tribal Council a larger share of the annual allowable cut.

The elected chief of the Huu-ay-aht says his community has fought with forestry companies over logging in their territories as they asserted their aboriginal rights and title. But real progress came when they looked for mutual benefits instead, jointly managing forestry in the TFL with Western Forest Products.

The Huu-ay-aht conducted their own timber supply assessment to determine just how many ancient, culturally important cedar trees remained, and they assessed how many needed to be protected to meet their future needs. The decisions have been made with both elected and hereditary leadership and the membership have voted on major decisions along the way.

“We’re tired of being on welfare, for Pete’s sake,” Mr. Dennis said. “The Huu-ay-aht are really proud of the strides that we’ve made in the last few years.”

At the same time, he said there is now an internal debate over the community’s participation in old-growth logging. There are Indigenous elders and young people on the front line in Fairy Creek, and the confrontations between forest-industry contractors and the protesters have been ugly at times.

Even in defending logging, the Huu-ay-aht condemned the use of racist language and intimidation directed at the protesters, and it has hired a conflict-resolution expert to make recommendations on how forestry operations can continue while ensuring individuals are able to exercise their right to peaceful and legal protest.

As well, on Wednesday, the Huu-ay-aht launched another consultation with their membership, to set up a new integrated resource-management plan. It’s an opportunity for those voices to be heard, he said. “Some of our citizens would like to reduce our harvesting and that’s why we’re doing this. … We have to balance our economic needs with our cultural needs and our environmental needs. We have to find a happy balance.”

On June 5,  the Pacheedaht, Ditidaht, and Huu-ay-aht together wrote the provincial government to declare that they were taking back authority of their lands – and would defer old-growth logging for two years in the Fairy Creek and the Central Walbran areas, which are at the heart of the current conflict. They have not halted logging entirely, however, and they also issued an edict to protestors in the region not to interfere.

The three Nations say they have committed to developing and implementing world-class integrated resource management plans, and after 150 years of others deciding how to exploit their traditional territories, they are going to govern and economically benefit from the resources. So protestors can protest, they said, so long as they don’t disrupt forestry operations in other parts of their territories.

Indigenous opposition to old-growth logging in the province has been led by Grand Chief Stewart Phillip, president of the Union of B.C. Indian Chiefs. In February, he signed a joint letter with environmental leaders, asking the province to help finance an initiative that would support First Nations to protect old growth. The money would be used to create Indigenous protected conservation areas, and to develop conservation-based businesses and economies as an alternative to logging endangered old-growth forests.

In an interview, Mr. Phillip said the province ignored his proposal and instead with its new policy has entrenched the status quo, which depends on old-growth logging as part of the forest industry’s financial requirements. He said First Nations communities are being offered forestry revenue as a way out of poverty, when the province could have helped them develop more sustainable alternatives.

“It puts a brown face on accelerated old-growth logging and I totally reject that. I find this so offensive, preying on the poverty of First Nations people,” he said.

“I stand with the vast majority of British Columbians, and our elders and knowledge keepers, that say we have a sacred obligation to provide stewardship to the land, to the waters. And that doesn’t include old-growth forestry.”

While the forestry plans announced on Tuesday aim to redistribute existing harvesting rights, the provincial government is also slowly moving toward changes that will increase protection of old-growth forests. The province has promised to put in place temporary deferrals for old-growth stands that are at risk of irreversible biodiversity loss by this summer, but said it can only do so with the approval of the relevant Indigenous communities.

The government has to work out the economic impact of deferrals, and has promised to mitigate losses for small area-based timber tenures – including Indigenous forestry operations.

Premier John Horgan, speaking to reporters during his policy announcement, said those deferrals could help address the conflict in and around Fairy Creek. “I’m hopeful that in the days ahead … that we’ll be able to put the pause in place that all of us I think so desperately want,” he said.

“But it’s not the waving of a wand. It’s hard work, and it involves not going back to our colonial past and dictating to Indigenous communities what they can and cannot do.” 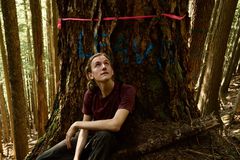 Fairy Creek blockade: What you need to know about the anti-logging protest in B.C.
June 10, 2021 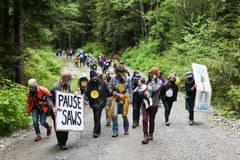 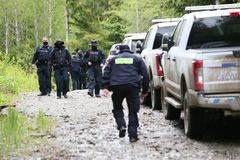