I never understood the allure of fraternities.

Back in my university days, frat boys carried a loathsome reputation: rich, entitled snobs. For blue-collar types such as myself, the temptation to plow one of these precious, penny loafer-wearing kids was ever-present. Then Animal House came out in 1978 and suddenly made frat life ridiculously cool.

In many ways, the movie glorified the debauchery, sexism and immoral behaviour that has been the root cause of so many of the problems associated with fraternities over the decades.

Generally, when frats are in the news it’s never for a good reason, which is the case this week. The 10 fraternities at the University of B.C. have suspended all activities indefinitely while police investigate allegations that multiple women were drugged at parties last weekend. An instructor at the school is the one who has made the claim that the incidents were alleged to have occurred at the frats on campus. There are legitimate questions being asked about the veracity of the accusations.

Nonetheless, the story has re-opened a debate that has been growing in volume over the years, especially in the United States where “Greek life” has a much bigger presence than it does here. But the same ritualistic behaviour that is the trademark of that life – hazing and initiation traditions which often involve drinking dangerous amounts of alcohol – exist as a fundamental feature of the clubs here, too.

But beyond the often-degenerate social activities with which frat houses are associated, there is an even more troubling dimension: the underlying premise for their existence in the first place. They are and always have been highly exclusionary associations that habitually divide by race, class and gender. Far from being afraid of being associated with privilege – often white privilege – fraternities seem to embrace it.

A lot of the research and literature written on fraternities emanates from the United States. And much of that work tells us that members of all-male fraternities are more likely to have a twisted view of what constitutes permissible sexual conduct. It also shows that women who frequent frat parties are more likely to be assaulted. We have seen this reality play out in courtrooms in recent years. The kind of binge drinking for which frat houses are known often compromises any notion of informed consent.

Alexander McCormick, a professor at Indiana University and director of the National Survey of Student Engagement in the U.S., said that while we need to be careful about making sweeping generalizations, some fraternities are guilty of “encouraging and rewarding sexual conquest that condones or normalizes sexual assault.”

It’s difficult to imagine this phenomenon is local to the United States.

Some believe that fraternities can be saved, can change, adapt to 21st-century values and sensibilities. Others are skeptical. Lisa Wade, a sociology professor at Occidental College in Los Angeles and author of American Hookup: The New Culture of Sex on Campus, is one of them.

“Reform is not possible because … these fraternities have drink, danger and debauchery in their blood,” she wrote in Time magazine a couple of years ago.

Canadian fraternities have not drawn the same negative attention that their U.S. counterparts have, largely because there have not been incidents of the same degree of seriousness. Since 2000, there have been 70 student deaths attributed to hazing in the United States. Among them, several were associated with fraternity-related pursuits that involved consuming unsafe levels of booze. But there is depraved behaviour that doesn’t generate headlines and remains a consistent part of fraternity life everywhere.

No, not all fraternities are the same. Neither are all frat brothers. A friend of my son’s who belonged to a frat at UBC is one of the nicest, most upstanding kids I’ve ever known. That doesn’t change the fact these organizations are a holdover from another time, one that openly celebrated and encouraged patriarchal privilege and the power with which it’s associated.

The passageway to manhood upon which the fraternity system was designed is anathema to the modern world in which we now live. It encourages behaviour, particularly toward women, that is not only abhorrent, but dangerous, too.

The allegations levelled against the fraternities at UBC are extremely serious. If they turn out to be true, then the fraternities should be closed down for good. But even if they’re not, it’s long past time we asked ourselves if fraternities still have a place on the campus of a modern Canadian university. I would vote no. 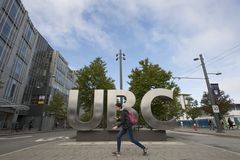