It will take at least two years and more than $20-million to turn the 150 rooms of the shuttered Regent Hotel in the Downtown Eastside into affordable housing with about half the number of units, the head of B.C.’s government housing agency says.

Shayne Ramsay, BC Housing’s chief executive officer, estimates it could take even more time and money to replace the Balmoral, the 165-unit hotel across the street. The City of Vancouver expropriated both hotels last month from the Sahota family. The Balmoral is damaged beyond repair, he said, and will likely be torn down and redeveloped. He said the site could become part of a larger development if Vancouver buys neighbouring properties.

Mr. Ramsay’s estimates are the first official snapshot of what will be required to replace some or all of the 300 units of housing at the twin hotels, which were ordered closed more than two years ago after decades of neglect and the failure of the city and its inspectors to keep conditions from becoming unlivable.

“We didn’t arrive in 2018 and just wake up and find out the Regent and Balmoral were buildings that were in very, very poor condition,” Mr. Ramsay said. “It happened over a period of literally decades, that’s one of the important pieces to understand.

The Globe and Mail reported earlier this month that the city spent more than $7.5-million for the Balmoral and Regent hotels, which was the amount city staff had estimated they would cost two years ago in an internal memo obtained by The Globe. The city has faced criticism for keeping the value of the deal secret at the insistence of the Sahota family, which a 2018 Globe investigation found had real estate holdings – about 40 properties in and around Vancouver – worth an estimated $218-million.

New social housing units cost at least $350,000 each to build, Mr. Ramsay said. To replace the Balmoral’s 165 units at this rate would cost about $57-million.

He estimated that a year of technical work will be needed at the Regent, then a year and a half of renovations. Most of the nearly 160 units there did not have their own bathrooms. The repaired building will likely have half that many apartments, he said, because all will include bathrooms and small kitchens.

Fiona York, a co-ordinator at the Carnegie Community Action Project, said those renovated units would be a big improvement. She and other local housing activists held a town hall two summers ago to canvass the community on what to do with the properties, and heard near-unanimous support for self-contained units rather than the dorm-style living still common in many older rentals in the area. A majority of people, many of whom were former tenants, also wanted both buildings torn down, Ms. York said.

“They’re such a place of horror and bad memories,” Ms. York said.

She added that Mayor Kennedy Stewart must stand by his commitment to work with the community on any developments that replace the hotels.

Mr. Ramsay said he does not know the status of the city’s attempt to buy properties west of the Balmoral and create a larger development.

Two of Vancouver’s top bureaucrats discussed that option in a confidential memo dated Sept. 19, 2018. The city reached out to the owners of four properties, including developer Concord Pacific, to gauge their willingness to sell. This bundle of property was independently appraised at about $10-million total, the memo said.

A city spokesperson said last week in an e-mailed a statement that “we are looking at all options” when asked whether a land assembly is still being pursued.

Private landlords still own and operate just over 40 percent of the area’s 6,681 small dorm-style units, known as single room occupancy (SRO), according to report by city staff released in June. That report recommended the city continue to pursue partnerships with BC Housing and Ottawa to improve the aging SRO housing stock while working to replace it with new self-contained units.

Scott Clark, a local activist and executive director of the Aboriginal Life in Vancouver Enhancement Society, said replacing the Regent, Balmoral and other SRO hotels is not as good as selling the land and using the money to develop more social housing in other parts of Vancouver, where residents often put up fierce opposition.

“If I had a map in front of me of all 24 neighborhoods and we looked at where [governments] put all the social housing, it would be abundantly clear what they’re doing and why they’re doing it,” Mr. Clark, adding most of this housing of last resort is still in the Downtown Eastside. 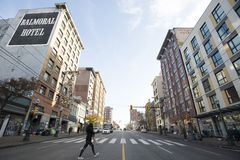 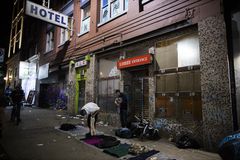 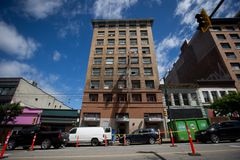