Two B.C. men who say they developed health issues including pulmonary disease from vaping are suing e-cigarette giant Juul for failing to adequately warn consumers of the risks associated with using its products.

Jaycen Stephens and Owen Mann-Campbell, from Armstrong and White Rock, respectively, say they began vaping last year, when they were both 18. Both believed that Juul e-cigarettes were a safe and healthier alternative to smoking “due to representations made in the public domain,” according to a civil claim filed this week in B.C. Supreme Court.

The claim accuses the San Francisco-based company of playing down, misrepresenting or under-reporting the product’s serious side effects and harmful complications, and failing to appropriately warn of the risk of illnesses. It also says the company’s advertisements and promotions of the product “had the capability, tendency or effect of deceiving or misleading consumers regarding the safety and efficacy of e-cigarettes.”

The plaintiffs are seeking personal damages and recovery of health-care costs. They are looking to certify the claim as a class-action.

Mr. Stephens said in an interview that his rapidly deteriorating health prompted him to take action on behalf of those suffering adverse effects from e-cigarettes.

“All these products were advertised as a healthier alternative to smoking for so long, and they added candy-like flavours to bring in young users like myself without research,” he said Wednesday.

The competitive skateboarder said that one year of smoking the product has hindered his stamina and leaves him breathless “almost seconds in.”

The allegations have not been tested in court. Juul Labs Canada said Wednesday that it had not yet been served with the statement of claim and is unable to provide further comment.

Lawyer Anthony Leoni, who is representing the two plaintiffs, pointed to a statement on the company’s website as an example of misleading communications: “Juul Labs was founded with the goal of impacting the lives of the world’s one billion smokers by eliminating cigarettes.”

“So what does that imply? That there’s a good, that there’s a value to replacing smoking with Juul – when in fact it could very well be the opposite,” Mr. Leoni said.

The legal action in B.C. comes days after the resignation of Juul Labs chief executive officer Kevin Burns, and the company’s announcement that it would suspend “all broadcast, print and digital product advertising” in the United States.

In announcing his departure, Mr. Burns said he was very proud of his team’s efforts “to lead the industry toward much needed category-wide action to tackle underage usage of these products, which are intended for adult smokers only.”

On Wednesday, Alberta Health Minister Tyler Shandro said his government will move to regulate vaping products when it reviews the province’s smoking tobacco and legislation next month. All other provinces, except Saskatchewan, already have regulations in place.

Officials in B.C. and Ontario are investigating four cases of severe lung disease linked to vaping products. In the U.S., there have been 1,080 lung injury cases and 18 deaths linked to e-cigarette use as of Oct. 3.

The Centers for Disease Control and Prevention said the specific chemical exposure causing the lung injuries remains unknown at this time, and that no single product or substance has been linked to all lung injury cases.

“It is important for Canadians to know that vaping does have risks and the potential long-term effects of vaping remain unknown,” read the alert. “Non-smokers, people who are pregnant and young people should not vape.” 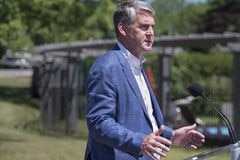 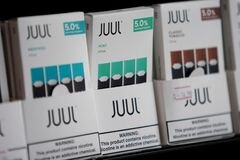 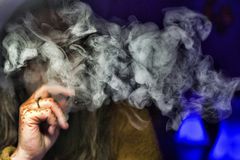