Kelp forests, large tangles of brown seaweed that can grow more than 80 metres tall, are regarded as aquatic sanctuaries home to thousands of species. Ranging along one-quarter of the world’s coastlines, they help produce oxygen in the atmosphere.

Large swaths of the brown seaweed are also seen as one of the most promising paths against climate change. Acting to capture carbon, they help alleviate ocean acidification and deoxygenation. And unlike their terrestrial counterparts, they are fireproof.

But they’re also vulnerable to the very thing they help mitigate.

New research from Simon Fraser University in Burnaby, B.C., found that populations of kelp react poorly when stressed from heat – how poorly depends on where they’re from.

Postdoctoral fellow and co-author of the study Jordan Hollarsmith said that while all the populations of kelp her team tested in warmer conditions produced fewer eggs and baby kelp, populations from high latitudes and around Chile not only performed worse, but failed to complete the life cycle.

“This implies total reproductive failure at the population level when exposed to high temperature,” she said.

And climate change is warming the world’s oceans. More than 90 per cent of excess heat trapped in the atmosphere from CO2 since the 1970s has been absorbed by the sea, according to a report from the United Nations’s Intergovernmental Panel on Climate Change.

Kelp faces a heightened challenge because it grows in the photic zone – the upper layers of the sea where sunlight can penetrate. These upper layers have been heating up the fastest.

Dr. Hollarsmith says she believes kelp populations specific to lower latitudes, which have historically been exposed to warmer waters and El Nino events, are more adapted for those conditions. Populations further away from the equator haven’t been exposed to climate events that raise the surface water temperature – until now.

“That was the ‘Blob’ that happened back in 2014, 2015 and was starting to form this year, as well, but seems to be dissipating,” Dr. Hollarsmith said.

The Blob was a disruption of warm ocean water from the Alaskan coast to southern California. It raised ocean temperatures by up to 4 C and was thought to be caused by a lack of summer winds to mix and cool the ocean.

Although observed to be weakening now, the marine heat wave likely had effects on vulnerable kelp populations around B.C., Dr. Hollarsmith said.

Bull kelp, a large species found along the northwestern Pacific coast, suffered a decline of nearly 50 per cent in Cowichan Bay and Sansum Narrows from 2015 to 2017, potentially from the warm sea surface temperatures from 2015 and 2016.

“In these conditions, prolonged periods of exposure to high water temperatures may have reduced spore formation and germination success,” Maycira Costa, a geography professor at the University of Victoria, wrote in an e-mail. She helped build a map of B.C.’s kelp forests to investigate its loss over time, but was not involved in the Simon Fraser study.

Graduate student Sarah Schroeder, who worked on Dr. Costa’s team and studied kelp in Cowichan Bay and Sansum Narrows, said while more data are needed to say definitively, interior areas of the Salish Sea are getting warmer, making it difficult for kelp to grow locally.

“Kelp is a highly variable species,” Ms. Schroeder said. “But a lot of restoration efforts further up in the Salish Sea have not been doing well and that’s largely been attributed to warm temperatures.”

But right now, the focus is on creating management strategies for Pacific northwest kelp among all levels of government and First Nations communities.

“Bull kelp has been declining [in the Salish Sea] for the past few decades, and no one’s sure what the main drivers of those declines are,” Dr. Hollarsmith said.

She said one likely stressor is overfishing, which removes from the ocean predators that eat the types of organisms that eat kelp. A reduced sea otter population has had a similar effect. Other stressors include temperature and the clear-cutting of trees. Tree roots stabilize the land and soil; once they are removed, the soil becomes looser and can fall into water bodies, burying the kelp from sunlight and preventing it from photosynthesizing.

“Their photosynthesis changes the water chemistry on a local level, which could help small, vulnerable early life stages of different species that live in the kelp,” Dr. Hollarsmith said.

She also said kelp plays an important role in its ecosystems by creating habitats for different species – many of which are food sources for other predators. They also contribute to industries such as fisheries and tourism.

“It’s a symbol of the West Coast ocean,” she said. “It’s something that many of us take for granted, and only now that it’s been changing, is it getting attention.”

Tires, rubber gloves and plastic bags: What the bottom of the Bay of Fundy looks like 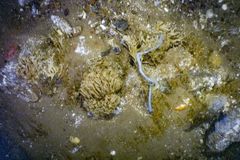 Marine heat wave off west coast weakens, but threat to ocean life not over yet 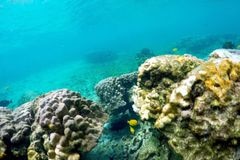 Return of the Blob, and other climate calamities 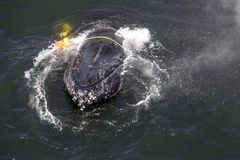