The City of Vancouver siphons 360 million litres of water from the local reservoirs every year, delivered to residents and businesses via a vast network of underground pipes. Countless millions of litres more fall from the sky in the same time period. And the city’s sewer system has to carry away much of it.

But getting rid of all that water – some of it mixed with feces, urine, road debris, laundry soap and more – has become one more barrier to adding housing in this city, which has been on a steady building spree for 30 years but is still in the middle of a housing crisis.

Plans for a long strip of high-density new homes along Cambie Street, especially around the massive new development at the Oakridge shopping mall, had to be slowed down three years ago when the city’s engineering department determined there wasn’t enough sewer capacity, acknowledged planners and engineers.

And other areas that had been on the verge of getting upzoned to add massive amounts of new housing around transit – the Nanaimo and 29th Avenue SkyTrain stations, along with eastern parts of Broadway – have seen those plans stalled because of the same problem.

That is: not enough sewer capacity for all the new homes planned for the area, along with the escalating problem of more storms and floods in the city caused by climate change.

“The city under the streets, it’s colossal. It’s a big part of the city that no one sees,” said Vancouver’s head of engineering, Lon LaClaire. “But the sewer system has to handle all the rain that falls on all the roofs and all the roads. The intensity is different now.”

Then when hundreds of new apartments and townhouses are added to a small area, which covers some of the land that would normally be used to soak up rain, and adds potentially thousands of toilets, washers, sinks, and other water-using devices, that can overwhelm the system.

Near the Nanaimo SkyTrain station, for example, “in that whole neighbourhood, the sewer system is close to capacity. It has regular flooding events,” said Mr. LaClaire.

During the boom of downtown condo building in the 1990s and 2000s, the problem wasn’t so acute, because the city had already decided to replace all the old pipes in that part of the city in order to separate sewer and stormwater systems. That gave some of those builders a free ride. (In other cities, either the sewer systems are not so old or builders understand they will have to pay for new utilities in newly developing areas).

That free ride has evaporated as builders have moved into other, relatively newer, parts of the city where replacement work hasn’t yet reached.

It’s meant a freeze on rezoning in some areas that former head planner Gil Kelley had identified in late 2017 as next on the list for densification. Coromandel Properties, which bought several properties around each of the Nanaimo and 29th Avenue SkyTrain stations earlier that year, and Pacific Reach, with three lots near the Nanaimo station also purchased around that time, have been told they have to hold off until the sewer issue is sorted out.

Those companies did not respond to requests for comment by The Globe and Mail, but developer Jon Stovell, who owns eight properties on hold along sewer-challenged Broadway, said it has become a significant issue for the industry.

“I know it’s a constant concern.”

That’s even though the city started charging all builders a new utilities fee as of July 2018, specifically aimed at helping to pay for sewer and water upgrades. That was supposed to cover $550-million in improvements that were strictly related to growth.

The rest (about $450-million for those same years) is being raised from regular taxes. Those funds will pay for replacing the oldest parts of the system and for separating Vancouver’s problematic older pipes that mix household water waste and storm water together – a legacy of pre-1960s building that now means Vancouver ends up dumping sewage mixed with rainwater into the Fraser River and False Creek during very heavy rainfalls as the sewer system gets overloaded.

But sewer additions and replacements are expensive and difficult and it’s a big system. “Nothing about it is easy to fix,” Mr. LaClaire said.

A little more than 2,100 kilometres of sewer pipe run through underground Vancouver, an infrastructure network valued at $6-billion. Almost 55 per cent has been upgraded to separated pipes for sewer and rain water.

In 2019, engineering reported that it had managed to replace 4.1 kilometres of sewer mains for $26.7-million. In 2018, it was 5.4 kilometres for $22.7-million. In 2017, only 4.6 kilometres were completed for $31.5-million, somewhat less than the 5.8 kilometres planned that year. In 2016, it was 7.5 kilometres for $37.9-million, 2.5 kilometres less than planned because “trunk size, arterial street and co-ordinated projects with higher unit rates resulted in higher expenditures per kilometre.” At those rates, the city is not on track to have its system completely separated by 2050, which the province has mandated it must.

An internal audit in 2019 stated that the system had been getting replaced at a rate of about 0.6 per cent a year for the previous 10 years. That’s considerably below the one per cent a year always considered the minimum prior to that.

In fact, many council politicians from the late 1990s and early 2000s said that they were surprised to hear that the rate seemed to have dropped.

“The first thing that used to go into the budget was the one per cent for sewers,” said former mayor Sam Sullivan, whose term ended in 2008. “Then, if there were rezonings, they would do more than that. We were always so proud of that – other cities didn’t do their sewers so they could do sexy projects. We’re not like that.”

Some engineering experts said it’s not that important to be at exactly one per cent a year, as long as the parts that are most at risk of failing are getting replaced. There’s no point in replacing functional pipe just to meet an arbitrary target.

City councillors Sarah Kirby-Jung and Lisa Dominato have been pushing to increase the sewer-replacement budget to reduce the amount of sewage dumping that happens regularly in Vancouver after storms.

Mr. LaClaire said he is working to get the rate back up to the previous target, as his predecessor, Jerry Dobrovolny, had been trying to do as well.

As climate change and the urban heat-island effect have produced much more violent storms in Vancouver during the past two decades, it’s meant that even a completely separated system would still produce a dump of all the toxic and dirty stuff washed off the streets during a storm.

So Vancouver, like some other cities, is looking at how it can become a better sponge. (To that end, the city banned homeowners from paving over their entire yards more than a decade ago).

The city buried almost all of its streams, so they can no longer be the overflow system.

But there could be new features added to streets and developments for absorbing water, said Mr. LaClaire. The Olympic Village development demonstrates one of them, with marshy swales set into the landscaping to hold water. The new bike lane on Richards Street has been designed so that water running down the street is funnelled to the roots of street trees.

There will need to be a lot more of that, said Mr. LaClaire, along with other greenwater-management strategies. Having water run down certain streets – “overland flow” in engineering talk – and into parks or ponds would be one. That’s how cities in Texas, which have decades of experience with flash floods, do it.

And developers who want to move ahead with new projects in sewer-deficient areas, well, they could look at how they could help.

“It’s conceivable that a new development could be done in a way that doesn’t put more pressure on the system,” Mr. LaClaire said. “If that development created permeable surfaces, the first 15 minutes of rain could be absorbed. And that project would be easier to approve.” 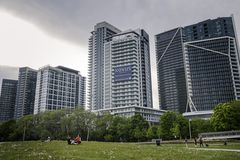 Opinion
Infrastructure should be more than functional. It should be beautiful
July 30, 2021 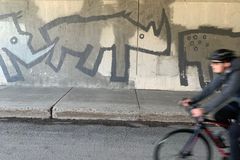