Police are combing through the dense wilderness of northeastern Manitoba as they seek two teens wanted in the killings of three people in British Columbia, deploying drones to scour the thickly forested area.

Bryer Schmegelsky, 18, and Kam McLeod, 19, are suspects in the deaths of American Chynna Deese, 24, and her 23-year-old Australian boyfriend Lucas Fowler, who were shot to death on the side of a Northern British Columbia highway and found on July 15. Four days later, the body of Leonard Dyck was discovered on a road 500 kilometres away. On Wednesday, RCMP charged Mr. Schmegelsky and Mr. McLeod with second-degree murder in Mr. Dyck’s death.

RCMP officers from across Western Canada, with help from the Ontario Provincial Police, are searching an insect-laden landscape of dense bush, swamps, and forests surrounding Gillam, Man. The teen suspects were last spotted in Gillam on Monday, and police later found the torched vehicle they were believed to be travelling in on the outskirts of the remote town.

The feeling in Gillam is “eerie,” said resident Stephanie Linklater, with a police presence simultaneously reassuring residents that there’s a force looking out for their safety and reminding them that fugitives considered armed and dangerous are on the loose.

Corporal Julie Courchaine of the RCMP said in a news conference Thursday that they believe the two teens are still in the Gillam area, more than 700 kilometres north of Winnipeg. “At this point in the investigation, we believe they are still in the area.” The teens are thought to have fled along northern highways through communities where they were served free coffee in one shop in B.C. and caught on camera in a co-op store in Meadow Lake, Sask.

Cpl. Courchaine told reporters that they have received more than 80 tips in 48 hours and are “taking all steps to be as thorough as we can.” There have been no reports of vehicles stolen in the area since the teens were spotted there.

A spokesperson for the RCMP in British Columbia said the Mounties have taken an interest in photos of Mr. Schmegelsky on social media, first obtained by The Globe and Mail, wearing army attire and holding Nazi paraphernalia. In an e-mail, Staff Sergeant Janelle Shoihet said copies of the photos have been provided to investigators. However, she did not reply to a question about the direction of any investigation. Mr. Schmegelsky’s father said he didn’t believe his son identified as a neo-Nazi, despite his fascination with the collectibles.

The landscape around Gillam both aids and hinders the fugitives, because the same harsh territory that makes them hard to find makes it difficult for them to survive. Cpl. Courchaine said “this is very challenging terrain. It’s a large area, there’s lots of dense forests, bush. It’s a very swampy area.”

On Thursday heavily armed police were roaming the small community as well as staffing a check stop on the main road leading into and out of the town. Residents said they saw more police officers on Thursday morning as well as an armoured vehicle.

Residents say that the streets of Gillam, population 1,265 in the 2016 census, are quieter than usual, with many residents staying indoors.

Ms. Cromarty says they are keeping children inside all day and watching them closely when they do go out. “It’s a scary day to go walking down the street,” Ms. Linklater says. “I’m staying inside because there are fugitives … my priority is my safety and the safety of my child.”

Connor Martin, 14, says he spent Thursday indoors, with the doors locked, which is rare in this otherwise safe and tight-knit community. He couldn’t go to work, because it would involve walking home and his boss said no one should walk.

While police are visible in Gillam during the day, “during the nighttime everyone’s worried,” says Ms. Cromarty. She said she plans to leave Gillam shortly for another town because of the atmosphere.

“I have to get away from here for a while,” she said.

At the Kettle River Inn & Suites – one of the few restaurants in town – staff said business was bustling with a couple dozen RCMP officers on Thursday.

The RCMP is also operating out of Kettle Camp, a property owned by Manitoba Hydro at the northeast of Gillam. Staff at the camp said RCMP have been coming and going from Kettle Camp on Thursday.

Mr. Dyck, identified this week as the man found dead near the burned-out camper in Northern B.C., was remembered Thursday as a dedicated scientist, passionate about marine botany.

He had been a sessional lecturer in the botany department of the University of British Columbia, and interested throughout a long career in certain marine algae.

He did his bachelor of science in 1978 at the University of British Columbia, and master’s in science in 1991, also at UBC, according to Mr. Dyck’s doctoral thesis.

His PhD thesis, dated 2003, was on demographic patterns and processes of Mazzaella splendens – a type of seaweed – at Bamfield on Barkley Sound on the west coast of Vancouver Island.

Mr. DeWreede said he knew Mr. Dyck for more than 20 years, and that the dedicated father of two sons was also passionate about camping, said Mr. DeWreede.

“Len had made previous car camping trips to B.C.’s north, some with his family and/or one of his sons, sometimes on his own.”

Assistant professor Patrick Martone said in a statement provided to The Globe and Mail that Mr. Dyck was a “cherished lecturer” in UBC’s botany department.

“When you first met Len, he had a somewhat gruff exterior, but students soon realized he was a knowledgeable, trusted teacher and scholar who loved sharing his enthusiasm and curiosity and showing them how to uncover hidden gems in the natural world,” Mr. Martone wrote.

“His passion for learning about bizarre and beautiful organisms that few people ever get to see, inspired our students to feel that same passion and awe.”

He wrote that he will especially miss Mr. Dyck’s laugh, which "often followed some wry comment. It makes me tear up thinking that I won’t get to hear it again.”

“You can see it. That’s him. You look at that photo and see who he was,” she said.

With reports from The Canadian Press. 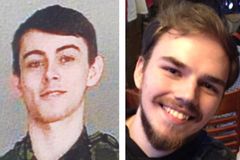 Explainer
What happened to the fugitives in Manitoba? What we know so far
August 13, 2019 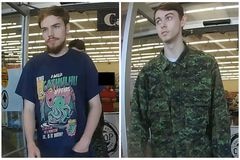 Follow Jack Denton and Ian Bailey on Twitter @TrueDenton @ianabailey
Report an error Editorial code of conduct
Due to technical reasons, we have temporarily removed commenting from our articles. We hope to have this fixed soon. Thank you for your patience. If you are looking to give feedback on our new site, please send it along to feedback@globeandmail.com. If you want to write a letter to the editor, please forward to letters@globeandmail.com.
Comments are closed