Officials say they’re working as quickly as possible, but can’t determine if they’re on track to create a natural passage at the site of a Fraser River landslide that would allow salmon to reach their spawning grounds.

The slide discovered last month created a five-metre waterfall in a narrow and remote portion of the river near Big Bar, north of Lillooet, B.C.

Al Magnan, environmental lead for the team working to help the fish pass, said during a teleconference Wednesday that conditions change every day, so crews aren’t working on a timeline.

Millions of fish are expected to reach the site in the coming weeks and Mr. Magnan said 40,000 of primarily chinook and sockeye have already been recorded two kilometres downstream from the barrier.

Crews have transported 1,400 salmon by helicopter, but few have been recorded passing the site on their own, he said.

If more fish don’t begin making it past the slide site, officials said a fish ladder to help salmon move up the waterfall is ready for installation on the weekend or early next week.

While there appears to be a bottleneck of fish building downstream, Mr. Magnan said that doesn’t necessarily mean there will be a mass die-off.

“From a migration point of view, it’s never linear. There are natural delays in migration and natural barriers that take time,” he said.

Analysis of the slide shows it likely occurred in October or November.

A number of salmon species migrate up the river to spawning grounds, including chinook, sockeye, pink and coho.

Work on the swift-moving river in the remote area is challenging and crews continue rock scaling to make it safer. On Monday, they worked to clear roughly 300 logs that had accumulated in a back eddy immediately downstream of the waterfall to make way for a fish wheel.

The wheel being assembled on site is one of many strategies biologists are pursuing to capture and move the salmon.

A Seattle-based company that pitched a cannon-like technology to move the fish said it’s concerned the assessment process is taking too long to prevent the crisis facing salmon populations.

Vincent Bryan, chief executive of Whooshh Innovations, said the company’s “fish passage portal” could move up to 50,000 fish a day beyond the barrier through pressurized tubes.

But Mr. Bryan said a third party hired by the Department of Fisheries and Ocean to assess the safety of the technology told Whooshh it would take three months to complete.

“I actually think that the emergency nature of this does not lend itself very well to that process, it’s too cumbersome and slow,” Mr. Bryan said.

The technology would see fish swim in on their own and in the span of a second be scanned via computer, sorted for size, then transported using misted air for a “frictionless glide” of about 20 seconds to the end of the tube 500 feet away.

Versions of the technology have been used on a smaller scale to move fish beyond dams and in one case, sort and remove hatchery fish from wild populations in Washington State. The company has held contracts with several American tribes and the Washington Department of Fisheries and Wildlife, Mr. Bryan said.

While Whooshh was prepared to jump into action, Mr. Bryan said it already had to release the barge company it had contracted for the project because the pace was too slow.

“Our options keep getting limited by the fact that no decisions have been made,” Mr. Bryan said.

Mr. Magnan said during the teleconference that no options have been taken off the table.

“In terms of the Whooshh system, it’s excellent technology, it’s been proven in many applications and there’s significant benefit to Whooshh in the number of fish that can be moved quickly and with very little stress,” Mr. Magnan said. 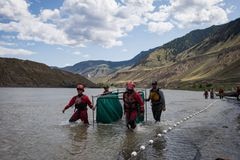 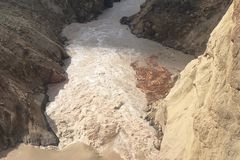 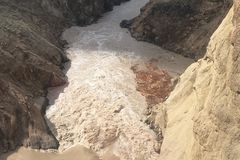