The number of Canadian veterans prescribed opioids or tranquilizers has declined significantly in the past six years while those authorized to use medical cannabis has skyrocketed, even as Veterans Affairs​ capped reimbursement for it.

Experts caution more in-depth research is needed but say these new data, released to The Globe and Mail by Veterans Affairs Canada, echo trends observed in U.S. states with legalized medical marijuana, where significant declines in opioid overdoses suggest that people may be substituting these oft-abused, addictive medicines with cannabis.

Since 2012, the number of veterans prescribed benzodiazepines – with brands such as Xanax, Ativan and Valium – decreased 43 per cent to 4,702 people last fiscal year. Opioid prescriptions also shrank 31 per cent during that same period to 10,130. Two years ago, when The Globe first obtained these data, those declines were slightly less pronounced.

Meanwhile, the number of veterans getting reimbursed by the department for medical marijuana exploded from just 68 to almost 7,300 last fiscal year. And the costs of these cannabis prescriptions ballooned to hit $63.7-million in 2016 before bureaucrats reined in the amount allowed per month and costs dropped slightly to $50.9-million last fiscal year.

Only a fraction of Canada’s estimated 658,400 veterans is registered by doctors to use opioids, benzodiazepines or medical marijuana. This data pool is too small and unrefined to prove any concrete links between the use of the three types of drugs. But, it comes on the heels of relatively large-scale U.S. studies showing more access to cannabis was related to fewer harms associated with opioids, according to Bernard Le Foll, a clinician-scientist specializing in drug addiction at the Toronto-based Centre for Addiction and Mental Health.

“This is going in the same direction so I think this is becoming a very interesting story that is supported by more and more data,” said Dr. Le Foll, who said he has failed to secure funding over the last several years to study the ways cannabis might be a substitute for opioids.

In a statement to The Globe, Veterans Affairs Minister Seamus O’Regan said the College of Family physicians has indicated that three grams is the safe limit for marijuana consumption, but added that access to higher limits is available to veterans who consult with a doctor and specialist.

“I am most concerned about the health and well-being of Canada’s veterans and it was the fundamental consideration in our government’s development of this policy,” Mr. O’Regan said.

“Cost is not the main consideration when it comes to the health and well-being of veterans. Cannabis for medical purposes is an emerging field and we will continue to monitor new evidence, consult experts and veterans and update accordingly.”

Benedikt Fischer, senior scientist at CAMH, said an analysis is needed of the individual prescription history of veterans to see how and when they may have dropped one substance for another.

“There is so much hype around how cannabis will be the solution, the magical potion,” he said. “I’m not rejecting that there is a potential for certain therapeutic or replacement effects, but I’m an empiricist so I need to look at the data and this doesn’t tell me much here.”

Stephanie Lake, a researcher with the BC Centre on Substance Use, said it is hard to know whether these drug trends are driven more by patients or their doctors.

Since 2008, the number of Canadians taking prescription sedatives – including benzodiazepines, but also sleep aids such as zopiclone – has remained steady at roughly 10 per cent of the population aged 15 and older, according to a bulletin issued last July by the government-funded Canadian Centre on Substance Use and Addiction. While illicit opioid use has skyrocketed in recent years, the number of Canadians prescribed this class of heavy painkillers has dropped from about 21 per cent in 2008 to 13 per cent in 2015, according to the latest available data from the Canadian Tobacco, Alcohol and Drugs Survey.

Zena Samaan, a staff psychiatrist and professor at St. Joseph’s Healthcare in Hamilton, said it is also important for researchers to find out if many of these veterans no longer prescribed opioids have just turned to illegal sources to get the same drugs. One study she had published last year showed that people addicted to opioids who are on methadone treatment do worse off if they are also using cannabis.

“We need more systematic studies to see is there benefits, is there harm and what is the balance?” Dr. Samaan said.

The statement said this knowledge gap could be fixed by the $20-million in funding announced in this year’s federal budget for studies on cannabis over the next five years.

Stephen Bird started using cannabis roughly a decade ago to combat the excruciating pain of a fistula that resulted after he suffered a tear in his colon while pulling too hard to remove a heavy fuel cell from a helicopter at Canadian Forces Base Goose Bay nearly 20 years ago.

Before cannabis, he was ingesting a mix of roughly 30 different pain pills and spending up to 20 hours a day in bed. At the start of every week, his wife, Carla Murray, feared she could kill him if she made a mistake organizing his cocktail of medicines for each of the next seven days. When he had lost his appetite and then 27 kilograms, she said she “went out on the street and bought a bag of weed and a gallon of ice cream and brought it home.”

Since then, he has been authorized to use medical marijuana and takes two to three suppositories a day, which don’t get him high because the drug’s compounds never pass through his kidneys and liver and on to the blood-brain barrier. Now he only takes two nortriptyline pills each night to combat PTSD symptoms.

“I do not remember chunks of time from the last 10 years,” said Mr. Bird, who served on aircraft carriers around the globe. “[Now,] I wake up in the morning and feel like a normal human being.”

With a report from Laura Stone in Ottawa. 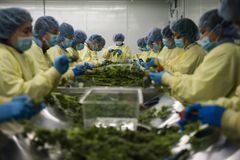 Marijuana a ‘significant threat’ to alcohol industry as Canadians choose between bud and Budweiser
Subscriber content
May 4, 2018
Plan on growing marijuana at home? There goes the neighbourhood, realtors warn
Subscriber content
May 2, 2018
Follow Mike Hager on Twitter @MikePHager
Report an error Editorial code of conduct
Due to technical reasons, we have temporarily removed commenting from our articles. We hope to have this fixed soon. Thank you for your patience. If you are looking to give feedback on our new site, please send it along to feedback@globeandmail.com. If you want to write a letter to the editor, please forward to letters@globeandmail.com.
Comments