The BC Liberal opposition is now having second thoughts about voting earlier this week to remove the legislature’s two highest-ranking unelected officials, who were expelled after a secret investigation by the Speaker of the House.

Speaker Darryl Plecas began a probe at the start of this year that culminated in the removal under police escort on Tuesday of Clerk of the House Craig James and Sergeant-at-Arms Gary Lenz. Presented this week with the news that the two long-time administrators are the subject of a criminal investigation, legislators unanimously approved a motion to put them on leave.

Coming after a lawyer’s letter to all three House leaders on Friday demanding the two officers be reinstated, Liberal Leader Andrew Wilkinson said his caucus made erroneous assumptions about the legality of the process when it agreed to vote to remove Mr. Lenz and Mr. James.

“We made the assumption that the government side, with all its extensive legal capabilities, would do the legal diligence before recommending something to the House,” he said. Asked if the Liberals made a mistake in supporting the motion, he said: “No one has the necessary facts to come to a conclusion.”

In a letter addressed to the House leaders who agreed to take action against the two officers, Vancouver lawyer Mark Andrews wrote that Mr. Lenz and Mr. James were expelled in a "deliberately public and humiliating manner” and their reputations “are in the process of being destroyed.”

Mr. Andrews called on all MLAs to rescind their motion, and allow the two officers to return to work. "It is clear that their removal is not necessary for the purposes of the integrity of the investigation.” He noted that the decision to remove the two officers “was not done at the behest of the Special Prosecutors or the RCMP.”

Mr. Andrews said his clients deny any wrongdoing − and still have no idea of what they are alleged to have done wrong.

“They have been provided with no explanation for this extreme treatment beyond being told that it is because of an ‘outstanding investigation,’ the nature of which was not and still has not been disclosed to them,” he wrote.

NDP House Leader Mike Farnworth issued a statement that avoided responding to the lawyer’s letter, saying instead that the decision to move forward with the suspensions was agreed to by all three House leaders.

Wally Oppal, the former provincial attorney-general who was retained on Thursday as a special adviser to the Speaker, said in an interview that Mr. Plecas acted properly, based on sound advice. “The Speaker has been beaten up, I think unfairly,” he said. "His position is that he saw evidence of wrongdoing, and he reported it to police.” Mr Plecas took his concerns about the two House officials in late August.

The Liberal Leader called for an emergency meeting of the legislature committee that provides oversight on spending to find out what resources Mr. Plecas has secured to conduct his probe.

Those resources in question include Mr. Oppal, who says he is providing legal advice as well as serving as the spokesperson for Mr. Plecas. The Liberals also want to know more about the unnamed lawyer who was present in the room when Mr. Plecas briefed the House leaders on Monday. And they are questioning the qualifications of the Speaker’s special adviser Alan Mullen, who played a pivotal but secretive role in the investigation of Mr. Plecas’s suspicions. Mr. Mullen is not a police officer or a lawyer. “Was this the Speaker running his own investigation branch, his own legal branch, which is totally inappropriate.” Mr. Wilkinson said.

The drama has overshadowed an otherwise busy legislative agenda this past week. In the absence of information about the allegations against the two officials, questions have shifted to the Speaker’s motivation in pursuing his investigation through unorthodox channels.

The Liberals publicly questioned, as well, Mr. Plecas’s attempt to install his hand-picked adviser and friend, Mr. Mullen, into the sergeant-at-arms' post, in an acting capacity. While all three House leaders confirm that the Speaker floated the appointment in their meeting on Monday night, they swiftly rejected the proposition. 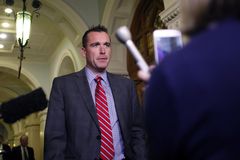 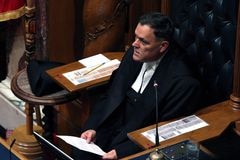