Transit systems are expecting the new normal won’t include as many passengers as provinces reopen their economies and Canadians return to their livelihoods.

More than a third of people in the Vancouver region expect to drive more and use transit less postpandemic, while almost as many say they will cycle or walk more, a survey done for the Greater Vancouver Board of Trade has found. Another 12 per cent to 13 per cent of respondents in the region said they’d use ride-hailing and car-sharing less, according to the survey by Mustel Group.

The trend is also concerning civic officials in Edmonton and Calgary, where falling ridership could have consequences for transit expansion plans.

“Whether we get back to 100-per-cent ridership any time soon is a very fair conversation,” said Edmonton Councillor Andrew Knack, a transit advocate. “I assume we won’t.“

He said the majority of council is sticking with plans for light-rail-line expansions, in spite of some debate over the topic, because they believe people will eventually return.

“COVID or not, you can’t build your way out of congestion,” said Mr. Knack, who said that no one doubts that people will return eventually to airplane travel, which has even more difficult challenges with air circulation and safety than any ground transit system.

Calgary councillors also voted 8-5 last week to approve a new route for the much-debated Green Line expansion to its light-rail system. Some councillors, such as Joe Magliocca, argued against it, saying ridership on transit for the next five to 10 years was in question.

“We’re all feeling the effects for sure,” said Stephen Tauro, a spokesman for Calgary Transit, which has a survey under way on what people say they’re likely to use for travel around the city in future. “The biggest thing is to monitor how things go.”

Calgary is still getting only about 125,000 riders a day, down about 80 per cent from its prepandemic normal. Edmonton is doing better, with about 50 per cent of normal ridership.

In Vancouver, which had prided itself on its ridership being one of the fastest-increasing in North America in recent years, TransLink chief executive Kevin Desmond says there is no doubt that there won’t be growth any time soon.

“I firmly believe that this is a point in time where, for a year or two, we will lose ground,” he told a virtual Board of Trade conference. “Our key issue is when will people return.”

TransLink surveys have indicated similar numbers to the survey done for the board of trade: Two-thirds of riders say they are ready to come back to transit; one third are uncertain.

“We need to get all of those people back and start growing ridership again,” Mr. Desmond said.

Like transit planners in other cities, he worries that, if confidence in transit isn’t restored, people will do what they did in the postwar world: return to cars. That risks producing enormous congestion problems, as well as accelerating climate change.

Both he and a representative of one of Vancouver’s major car-sharing companies, Evo Car Share, said the key is going to be restoring people’s trust in the safety of the system.

“Consumer confidence is important. Car-sharing is undeniably convenient. Now we have to show people they’re safe,” said Tai Silvery, the vice-president of Evo, whose company saw use fall by 70 per cent below baseline more than two months ago. It’s now 20-per-cent lower.

The margin of error on Mustel Group survey of 300 people is plus or minus 5.6 per cent at the 95-per-cent level of confidence.

BC Ferries says passengers travelling more than 30 minutes will be asked to bring a mask
June 8, 2020 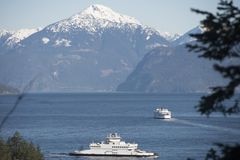 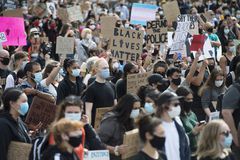