Long before fentanyl transformed the illicit drug market, researchers in Vancouver embarked on a study that would open the door in Canada to a new form of treatment for opioid addiction.

The study found that, for the small number of people who did not benefit from common oral medications such as methadone, injectable pharmaceutical-grade heroin was safe and effective. Participants, stabilized on a regulated opioid, reduced illicit drug use and criminal activity, improving their physical and mental health. Employment and economic situations also got better.

More than a decade later, an illicit drug supply made extremely toxic by high concentrations of fentanyl has killed thousands in British Columbia, and treatment with pharmaceutical-grade heroin (called diacetylmorphine, or DAM) to get people off street drugs has taken on a new significance. But the option, stymied by regulatory barriers and the high cost of importing the drug from Europe, has never expanded beyond a couple of hundred people.

Frustrated by a lack of action from government, the two have launched a company called FPP Inc., short for Fair Price Pharma, with the goal of producing an affordable domestic supply of legal, injectable heroin for use in treatment.

Dr. Schechter, who is also a professor in the School of Population and Public Health at the University of British Columbia, said in an e-mail that the overdose poisoning crisis and the failure to expand access to legal heroin – a proven, effective and cost-effective treatment – in the face of a desperate need for safer supply, drove the two doctors to act.

Dr. Schechter said the company plans to set up a dedicated facility to manufacture the product and offer it at cost to interested health care providers, including those in other provinces.

He and Dr. Kendall are expected to meet this month with Health Canada’s therapeutic products directorate, which regulates prescription drugs, to determine the tests and evidence needed to obtain a licence. At the same time, they will begin fundraising through the BCCDC Foundation for Public Health. They estimate they will need about $3-million to launch the product.

“Once the start-up funds are raised, we believe a licensed product could be available in 18 months,” Dr. Schechter said.

Dr. Kendall, who was provincial health officer until 2018 and is now co-interim executive director at the BC Centre on Substance Use, said the province’s record overdose deaths underscore the need for the treatment option.

He added that treatment with heroin has been available in Europe for 25 years. “And yet we still seem to have blockages and cannot offer it to people who could benefit from it,” he said. “We need to address that,” he said.

Switzerland was the first country to use it in the mid-1990s, and countries including Denmark, Germany, the Netherlands and Britain followed suit.

About 130 people in Canada – all in Vancouver and Surrey – receive injectable legal heroin, but the treatment was never expanded owing largely to the high cost of importing it from Switzerland. Regulations also cap how much can be imported, and waits of several months for the medication to be delivered make treatment plans inflexible.

Sources in the medical community told The Globe and Mail that the B.C. government has for the past several years been in discussions with Canadian pharmaceutical company Pharmascience Inc. about creating a domestic supply. However, those discussions have dragged on, with the Montreal company wanting a number of assurances, including that there would be enough demand, the sources said. The Globe is not identifying the sources because they were not authorized to discuss the matter publicly.

This spring, FPP approached global chemicals company Johnson Matthey about buying the raw product needed to make pharmaceutical-grade heroin, and received a quote that is four times what the company charges in Europe, Dr. Schechter said.

It’s unclear what the situation is now with the discussions between B.C. and Pharmascience; neither party would confirm they occurred.

“We think that [Johnson Matthey] is now trying to profit to a great degree,” said Dr. Schechter, who was not privy to the negotiations. “That makes us fear that the Canadian manufacturer might be [facing] the same higher prices,” which would mean no expansion of treatment.

FPP has made alternate arrangements for the raw product to keep its prices low, Dr. Schechter said. Johnson Matthey did not respond to a request for comment.

A follow-up to the study of pharmaeutical-grade heroin, called the Study to Assess Long-Term Opioid Maintenance Effectiveness (SALOME), which ran from 2011 to 2015, found that liquid hydromorphone, a pain medication commonly used in acute and palliative care, produced a similar effect.

Some people receive take-home hydromorphone tablets, which cost significantly less, under a provincial program aimed at providing safer alternatives to street drugs. Some patients ingest them orally and others crush, cook and inject them.

Scott MacDonald, physician lead at the Providence Crosstown Clinic, where the two studies took place, said the tablets are safer for those who usually ingest illicit opioids orally. However, the long-term effects of injecting a tablet are unknown. Impurities and fillers such as talc or cellulose can lodge in the blood vessels of the lungs.

“For people who need to inject, we need to provide what has been shown to be safe, effective and cost-effective – and pharmaceuticals that are meant for injection,” Dr. MacDonald said.

Guy Felicella, a peer clinical adviser at the substance-use centre, said treatment options must reflect the reality that fentanyl has saturated the illicit market.

“If our goal is to get people away from the contaminated drug market, then we have to give them a choice of something that is going to compete with fentanyl,” he said, adding that legal heroin can do that.

A 2008 status report on the pharmaceutical-grade heroin study cited research that estimated that the societal costs of untreated heroin addiction exceed $45,000 a person each year.

A statement from B.C.‘s Ministry of Mental Health and Addictions said supply and import limitations have prevented the expansion of treatment with legal heroin, but that the province is working to expand access to injectable hydromorphone alongside other medications.

“Soon, we’ll be announcing plans to scale up access to safer medication-assisted treatment options for people at high risk of overdose through work with the federal government,” the statement read.

Health Canada said it has had discussions with companies that have expressed interest in supplying pharmaceutical-grade heroin in Canada, but that none has submitted a product for review.

Danielle Larrigan began receiving injectable legal heroin at Crosstown Clinic as part of the SALOME trial seven years ago. She has abstained from illicit drugs for six years, and been employed as a peer support worker for four.

She credits the program, and the supports that go with it, for helping her break a cycle of “fixing” and sex work that more than 20 other attempts, including 12-step programs and methadone, could not.

“SALOME saved my life, and it continues to every day,” Ms. Larrigan said.

Editor’s note: (July 14, 2020): Due to an editing error, a previous version of this story incorrectly referred to the company's fundraising arm as the British Columbia Centre for Disease Control’s public-health foundation.

Opinion
Ottawa should listen to police chiefs. Drug use is a health care problem, not a crime
July 12, 2020 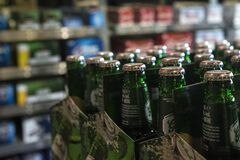