On a scorching Saturday afternoon, Vancent Zhu stood outside a SkyTrain station in Vancouver shouting slogans that condemn violent acts by Hong Kong anti-government protesters. He was facing off against a few hundred supporters of the Hong Kong protests. Among them, a few metres away, was one of his friends.

“Sad. That was exactly how I felt,” Mr. Zhu said, saying he and his friend hold totally different perspectives on Hong Kong’s biggest political crisis in years.

He compared himself and his friend to workers who built the Tower of Babel: “We were once cheering and laughing together, but now, we seem to be strangers.”

At the August protests, Mr. Zhu was joined by hundreds of demonstrators whose roots are mostly in Mainland China. They took to Vancouver streets four times, voicing support for Hong Kong police and denouncing violence during the protests.

A few meters away stood protesters that mostly have ties to the semi-autonomous Chinese territory. They held “Free Hong Kong” signs and shouted “Hong Kongers, add oil” – an expression to show encouragement – in Cantonese.

The massive protests that have wracked Hong Kong for months were prompted by a controversial extradition bill that has now been withdrawn. But the protests have shown few signs of abating. Demonstrators have added to their lists of demands, which include political reforms and an independent investigation of the police, whose use of violence in response to the protests has angered many.

The turmoil has spilled into major cities around the world that have ex-pat communities, including Vancouver, where the crisis has revealed tensions between newer immigrants from Mainland China and the longer-established Hong Kong immigrants.

Cantonese, the mother tongue of Hong Kongers and residents of several areas of southern China, used to be the dominant language in the Chinese-Canadian community. However, census data from 2016 showed the number of residents speaking Mandarin – the official language of Mainland China – at home in Canada has surpassed the number of those who speak Cantonese.

The same data show the number of Cantonese speakers is slightly higher than the number who speak Mandarin in the Vancouver area, but the gap narrowed significantly between 2011 and 2016.

The Hong Kong protests have opened up deep divisions between the two groups, prompting some Hong Kong Canadians to reject being identified as Chinese.

Jane Li, spokesperson of Vancouver Hong Kong Political Activists, a student-formed organization, said a hidden division between those from the Mainland and Hong Kongers has “erupted.”

“I feel unfortunate, but I am not surprised."

The 19-year-old said the difference between the two groups lies in politics, but also culture.

“Languages we speak are different. … A lot of adults were brought up while Hong Kong was under the British regime, and they still separate themselves from the Chinese identity,” she said. “Also, in the previous 10 years, the political interference from China has caused a lot of discontent.”

Ms. Li said the divisions have been brought to Vancouver.

Hong Kong, a former British colony, was handed over to Chinese rule in 1997 under the “one country, two systems” formula, which expires in 2047. The agreement guarantees Hong Kong liberties not enjoyed on the mainland, including an independent judiciary and a free press.

For lots of Hong Kongers, the city’s core values – respect for the rule of law and democracy – align much more closely with those of the West than the authoritarian China.

Although Hong Kong protesters considered the proposed extradition bill a further indication of Beijing’s encroachment on the city, Mr. Zhu and many in his group believe Beijing and the government of the Hong Kong Special Administrative Region did nothing wrong.

“You have the right to hold different opinions with the government, but please [protest] within the law. You cannot use violence to beat, intimidate those who do not agree with you.”

Mr. Zhu refuses to be labeled as pro-China: He said he believes people like him who are angry about the protests were actually showing support for the Asian financial hub.

“We also support Hong Kong. … But we don’t support violence,” said Mr. Zhu, stressing that striving for freedom and democracy by using violence is unacceptable.

The anti-government protests started with peaceful marches, but violent clashes between demonstrators and police have escalated in the past few weeks. Hong Kong police have used batons, tear gas and pepper pellets to push back crowds, while protesters have set street fires and hurled bricks and petrol bombs at officers.

“Violence clearly happens. … As long as there is violence, it’s wrong,” said Leo Ji, who attended a pro-China rally on the same August weekend in Toronto.

Members of the Chinese-Canadian community who are condemning the protests are convinced some of the Hong Kong demonstrators and their supporters want independence, although that is not among the demands. But anything that would harm the country’s sovereignty hits a nerve.

At the event in Toronto, Mr. Ji said he saw supporters of the protests holding a coat of arms that was used in colonial Hong Kong.

“To my knowledge, this is a behaviour of secession,” he said.

Ashely Yu, 22, who attended three pro-China rallies in Vancouver, pointed out the “Free Hong Kong” sign, an indication, she said, of a call for independence.

Victor Ho, former editor of Sing Tao Daily in Canada, argued violence isn’t mainstream in the protests. He added pro-China supporters in Canada and elsewhere are largely influenced by Chinese propaganda that alters information about the Hong Kong movement to discredit it.

When the first massive peaceful protest broke out on June 9, it made international headlines, but Chinese state-backed media ignored it. On Weibo, China’s Twitter-like social-media platform that has about 200 million active users a day, content about the protests was censored and information on the June 9 protest didn’t appear at all.

But as clashes became more frequent, Chinese authorities described the movement as showing “signs of terrorism." Pro-democracy leaders, including Joshua Wong and Martin Lee, a former member of the city’s legislative council, have been called the “saboteurs of Hong Kong” and “traitors.”

Fang Kecheng, assistant professor in the school of journalism and communication at the Chinese University of Hong Kong, said Chinese propaganda is intended to tell its consumers that the protesters’ demands and the ways they deliver them are unreasonable.

“Violent acts are decontextualized [by the Chinese propaganda] and the effect is very obvious, according to opinions online, on WeChat and Weibo. It provoked many Chinese people to oppose or even resent the Hong Kong protests,” Prof. Fang said.

Ms. Yu and Mr. Li acknowledged the main sources of their information about the Hong Kong protests are media outlets or social-media platforms in China. But Mr. Zhu, who said he has examined the issue through reporting from China, Hong Kong and Western countries, concluded the Western media are biased.

Prof. Fang said the strong reaction from the pro-China camp is not only derived from a potent campaign by Beijing, but also reflects the fact that many overseas Mainlanders tend to link China’s interest to their own, especially when the country is becoming more powerful and influential.

China’s economic success was followed by a heightened sense of patriotism and nationalism. Nicholas Wang, one of the co-ordinators of the pro-China rallies in Vancouver, said attendees don’t uphold China’s Communist Party, but simply have a “patriotic heart.”

“China has become powerful, so people now dare to speak up,” he said.

Mr. Zhu called for Hong Kongers to drop their entrenched prejudice against China because it has been trying to improve itself. He stressed that he hopes peace and order can be restored soon.

But for Mr. Ho and other pro-democracy supporters, this fight cannot end.

“Now, it’s a battle of guarding [the democratic] values that Hong Kongers can’t afford to lose. Once they lose, they would become slaves,” he said. 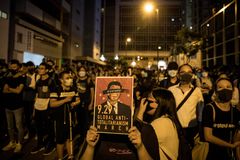 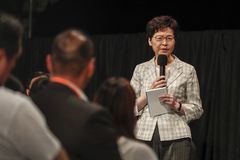 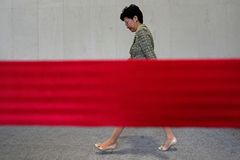