Josh Lockhart went out to water his lawn on Thursday afternoon and noticed white flakes landing softly on his car.

After a moment of confusion, he realized the flakes were ashes from wildfires burning at hundreds of locations throughout B.C., including near the resort town of Kimberley, where Mr. Lockhart and other residents have been on evacuation alert since Thursday night.

Mr. Lockhart and his family are living in a state of in-between: bags packed and ready to flee while carrying on with work, errands and social lives.

He has filled the family vehicle with gas and made other preparations so that he, his wife, their three children and the family pets – a dog and a bird – are ready to leave if the fire gets worse.

“People are trying to live their lives as usual,” Mr. Lockhart said in a telephone interview on Friday afternoon. “You just have to be ready for anything at any moment.”

Mr. Lockhart and his family are among thousands of B.C. residents under evacuation orders or alerts as a result of fires that prompted the province to declare a state of emergency last week. And with hot, dry weather in the forecast, relief is not on the horizon.

“Given how dry it is already, and given that we have a lot of fire on the landscape right now, particularly in the central part of the province, particularly in that Smithers to Prince George corridor, any nudge from the wind is going to cause those fires to grow," chief fire information officer Kevin Skrepnek said on Friday in a conference call.

Mr. Skrepnek said 556 fires are burning across the province, 50 of them “of note,” which means they are a potential threat to public safely.

Wind and lightning in parts of B.C. are helping to fuel the fires.

Heading into the weekend, the weather remains warm and “just bone dry," Mr. Skrepnek said. "Any chance of rain is simply not on the horizon.”

The weather may break towards the end of next week. If that happens gradually, with rain and cool temperatures, that would help the current situation. But if it brings wind and lightning, things could get worse.

“That is obviously about a week away. It’s hard to say how that is going to unfold right now,” he said. “That’s the active weather on the horizon. One way or another, it’s going to affect the situation.”

With reduced fire activity across Canada, Mr. Skrepnerk said firefighting resources might be available from elsewhere.

Don McCormick, the mayor of Kimberley, said the Meachen Creek fire had been burning in a remote area, but the winds changed on Wednesday night. He said the fire was about 10 to 15 kilometres outside Kimberley as of Friday morning.

“The situation with the alert is not that there is imminent danger, but that because of the unpredictability of this particular fire, better safe than sorry,” he said in an interview.

He said crews were dedicating more resources to the fire, and residents should stay calm.

“I just want to assure everybody that even though we are on alert, the situation is most definitely under control,” he said.

Rick Prasad, Kimberley’s fire chief, said residents should get their important items and papers together.

“This alert gives people some time to formulate their plan, put it into action, that way if anything was to happen, they’d be ready,” he said in an interview.

Interior Health said in a written statement that it was relocating people from some of its Kimberley health facilities.

The biggest fire in the province is the Shovel Lake fire, west of Prince George, as of Friday estimated at 79,000 hectares. 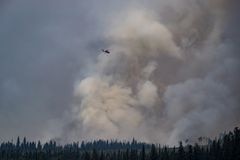 Poor air quality and visibility in parts of Alberta as smoke from B.C. wildfires continues to roll
August 15, 2018 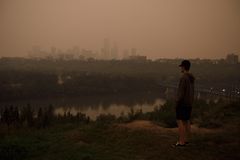 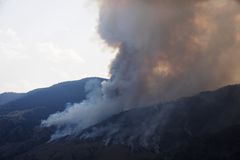 Follow Wendy Stueck, Ian Bailey and Sunny Dhillon on Twitter @wendy_stueck @ianabailey @TheSunnyDhillon
Report an error Editorial code of conduct
Due to technical reasons, we have temporarily removed commenting from our articles. We hope to have this fixed soon. Thank you for your patience. If you are looking to give feedback on our new site, please send it along to feedback@globeandmail.com. If you want to write a letter to the editor, please forward to letters@globeandmail.com.
Comments