The rollout of ride hailing this year in the Vancouver region has been extraordinarily bumpy, with multiple lawsuits, accusations that one taxi association is discriminating against disabled passengers, and general confusion.

The latest twist, after the provincial Passenger Transportation Board recently granted operating approval to Uber and Lyft, is that Uber is now seeking an injunction to stop the City of Surrey from ticketing its drivers.

Surrey Mayor Doug McCallum kicked off the week by lambasting the company repeatedly, saying he won’t back down and is promising more fines, even though Premier John Horgan says no city can block ride hailing.

The Uber head for Western Canada, Michael van Hemmen, said the Surrey situation is a catch-22, because of the city’s refusal to deal with ride hailing. He said the city is ticketing drivers on the grounds that the company does not have a business licence.

That skirmish comes on the heels of a lawsuit initiated Monday by a group of Lower Mainland taxi companies, who are asking for their own injunction as of Feb. 4 to stop Uber and Lyft from operating.

Meanwhile, the BC Taxi Association has announced that it will no longer subsidize drivers who provide rides to people in wheelchairs or with disabilities that require extra attention, because of the new competition – a move that has prompted widespread criticism.

Part of the problem is that cities, where councils vary widely in their attitudes to the arrival of ride hailing, are taking a patchwork approach toward licensing the companies while they slowly try to come up with a regional licence.

The Premier and Transportation Minister continue to insist that ride-hailing companies can’t be blocked by any municipality, but they have declined to enter the fray legally.

The Surrey situation is the most confrontational, legally and otherwise.

In Burnaby, Uber is being asked to get a taxi licence rather than a special ride-hailing licence, and councillors are prepared to consider bylaw fines if the company doesn’t do that.

“If they’re consistently picking people up in Burnaby, I wouldn’t have any problem with giving those tickets,” said Sav Dhaliwal, who is also the chair of Metro Vancouver, the regional government.

Mr. Dhaliwal, from a left-wing council, makes some of the same arguments for protecting the taxi business as does Surrey’s conservative-leaning mayor.

“Free enterprise only works best when everybody has the same rules,” said Mr. Dhaliwal, who praised Burnaby-based cab company Bonny’s Taxi for its community service in providing rides for people in wheelchairs.

Surrey’s Mr. McCallum has said Uber should be applying for a business licence as a taxi company.

But, in its affidavit asking for an injunction, the company says its representatives were informed directly by Surrey city staff that there was no business licence that Uber would be allowed to apply for.

That’s in contrast to other cities, which have taken a variety of approaches. Vancouver has created a special new licence classification just for ride-hailing companies, where they are charged $155 for a general application and $100 a vehicle, except for those that are wheelchair-accessible or emit zero emissions.

Both Lyft, with 388 cars, and Uber, with an as-yet-unspecified number, have obtained licences there.

In Richmond, both companies applied under the city’s existing vehicle-for-hire classification, which includes not just taxis but other kinds of car services and even tow trucks. They paid about $4,000 apiece for a licence.

In Burnaby, neither company has applied for any licence, although Lyft has said it will not operate there – only in Vancouver and Richmond – and an Uber spokesman said the company is “working out details” with Burnaby.

Surrey mayor digs in heels to keep ride-sharing out, despite province’s green light for the service
January 27, 2020 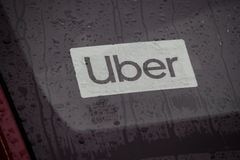 Uber and Lyft urge California voters to block law that would classify drivers as employees, rather than contractors
Subscriber content
October 29, 2019 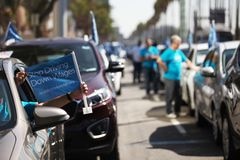