An all-out campaign is underway on the banks of B.C.'s Fraser River to help wild salmon get past a landslide, with officials weighing measures such as moving fish by helicopter or shifting boulders to create pools where exhausted fish can rest.

The effort – which involves provincial and federal government agencies as well as First Nations – reflects the potentially devastating impact of the landslide on salmon species including chinook and sockeye.

“Around three quarters of all Fraser River sockeye are going to be migrating past here in the next few months – and probably around 80 per cent of all Fraser River chinook populations have to go past the obstruction to get to their spawning sites,” Fisheries and Oceans Canada biologist Dr. Matthias Herborg said on Wednesday.

Dr. Herborg is currently incident commander for a command post set up in Lillooet, where personnel from several agencies, including the Canadian Coast Guard and the B.C. Wildfire Service, are scrambling to come up with ways to help fish get upstream.

The slide – in a narrow section of the Fraser River just north of Lillooet, about 200 kilometres northeast of Vancouver – has raised alarm because of how it could hamper wild salmon as they make their way back to spawning grounds.

“It’s already a narrow canyon – and now the flow is further constricted by additional material. We’re not saying it’s a total obstruction, but it’s definitely another obstacle in their way,” Dr. Herborg said.

There is no public road access to the slide site. Federal and provincial officials viewed it Tuesday from a helicopter.

Over the past week or so, work has focused on establishing safe access to the site by clearing loose rock by sluicing canyon walls with helicopter buckets. Then, scalers descended on ropes and chipped loose rock from canyon walls.

Once there is safe access to the site, workers hope to use pry bars and other methods, such as inflatable airbags, to shift large rocks to create pools where fish can rest, Dr. Herborg said.

Crews have set up hydroacoustic monitoring stations above and below the slide site to determine how many fish are getting through.

Crews will also be taking blood samples from fish to measure their health and stress levels.

Possible next steps might include setting up a fish ladder or, if deemed necessary, moving fish by helicopter.

The helicopter strategy would involve catching fish with nets downstream of the slide, packing them onto helicopters and shuttling them upstream, where they would be released.

The response team is currently looking into the costs and logistics of that strategy, Dr. Herborg said.

Gerald Michel is lands and resources co-ordinator with the Xwisten Indian Band, located downriver from the slide.

His community, already worried about declining salmon stocks, curtailed fishing last week after learning of the slide, Mr. Michel said. The slide has added to worries about the impacts of fish farming on wild stocks, he said.

“Salmon are not as strong as they were before and their numbers have dropped drastically,” Mr. Michel said.

Once water levels recede later in the year, crews can go in and use blasting and other methods to restore an easier passage, but with more fish heading upriver soon, there is no time to wait.

“The reason that we are here, and here in high numbers and throwing everything we can at it, is we want to minimize those [potential] impacts,” Dr. Herborg said. 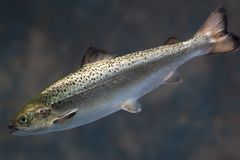 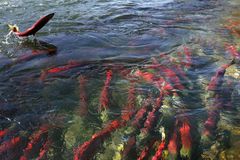 Fisheries Minister announces wild salmon safeguards and aquaculture virus tests
June 4, 2019
Follow Wendy Stueck on Twitter @wendy_stueck
Report an error Editorial code of conduct
Due to technical reasons, we have temporarily removed commenting from our articles. We hope to have this fixed soon. Thank you for your patience. If you are looking to give feedback on our new site, please send it along to feedback@globeandmail.com. If you want to write a letter to the editor, please forward to letters@globeandmail.com.
Comments