Coastal black bears thrive on a variety of salmon species, not just an abundance of one, say researchers who note their findings should prompt federal authorities to think more broadly about fish conservation.

Their study, published last week in the Journal of Animal Ecology, found that it is healthier for bears to eat a number of salmon species – coho, chum, Chinook, pink, sockeye and steelhead (which is actually a sea-run trout) – because their migration runs are spread out over the year. A given amount of biomass spread across four salmon species allowed black bears to consume roughly three times more fish each year than the same biomass from one large run of a single species.

“We tend to talk about salmon as one, but for bears, each species offers different eating opportunities,” said Christina Service, a PhD candidate at the University of Victoria and the lead author of the study. “A diverse salmon portfolio enables bears to eat on more days throughout the year and fish in different habitats.”

Ms. Service, partly with funding from the Kitasoo/Xai’xais Nation, led a team of scientists from the Spirit Bear Research Foundation, the Raincoast Conservation Foundation and the University of Victoria. They tested hair samples from 379 black bears and 122 grizzly bears in B.C.’s Great Bear Rainforest to estimate salmon consumption, a measure that relates to the number of cubs produced, body size and population density.

A simulation conducted by the researchers estimated that adding two species of salmon to a river that naturally plays host to two species would only result in a 3-per-cent rise in biomass. But the number of days that salmon would be vulnerable to predation increased 30 per cent, and the number of fishable days increased 60 per cent.

That’s because Chinook salmon can spawn in early November, pink salmon in September and sockeye salmon as early as late May. Even if the runs don’t consist of large numbers of fish, they allow bears to fish more often and spread out their meals.

“When bears only have access to larger, less-frequent runs, it’s similar to being at an all-you-can-eat buffet. They can only eat so much over a couple of weeks. They get full,” Ms. Service said.

She said the number of fishable days becomes an even greater problem when grizzly bears are present. The study found that black bears consumed approximately 40-per-cent less salmon with the generally larger bears around.

“When a grizzly bear moved into a watershed, noticeable behavioural changes in black bears were observed,” Ms. Service said. “They were scared and would run away.”

Conservation groups and communities that rely on bear watching ecotourism, such as the Kitasoo/Xai’xais Nation, are turning their attention to the federal government’s current salmon-management plan.

“It is no stretch to say that my community’s well-being is directly related to the well-being of the bears. Managing salmon, including continued investment in monitoring them to ensure their diversity, is critical for making informed decisions that benefit salmon, bears and communities,” he said.

Ms. Service said Ottawa’s current plan focuses on runs that yield high biomass because they are commercially important to fishermen.

“If we consider a bear’s interest, and communities who depend on them, it gives us reason to invest in smaller runs that often go unnoticed,” she said.

Bear watching ecotourism in B.C. has drawn massive crowds since the provincial government banned grizzly bear hunting in November, 2017. Ecotourism companies operating in First Nation territories such as those of the Kitasoo/Xai’xais and Homalco Nation are earning as much as 12 times more since the ban, and tourism has become the second-largest employer in the Kitosoo/Xai’xais community of Klemtu. 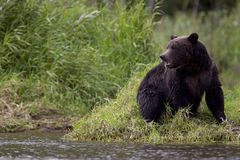 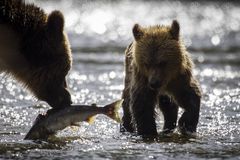