A father found guilty of killing his daughters on Christmas Day two years ago still says he didn’t commit the crimes, a B.C. Supreme Court judge was told Monday.

Andrew Berry was convicted in September by a jury on two counts of second-degree murder in the deaths of four-year-old Aubrey Berry and six-year-old Chloe Berry.

“Mr. Berry maintains he did not kill the children,” defence counsel Kevin McCullough told the court. “And he told the truth.”

Berry was seated in the prisoner’s box, wearing red, prison-issue athletic clothing and shackles around his ankles.

The trial heard each girl had been stabbed dozens of times and left on their beds in Berry’s suburban Victoria apartment, while he was found unconscious in the bathtub, suffering stab wounds to his neck and throat.

Berry testified that he was attacked because he owed money to a loan shark, but the Crown argued the motive for the murders was Berry’s anger towards his estranged partner, who he believed planned to seek an end to their joint custody of the girls.

She said his testimony that an unknown man attacked him in his Oak Bay apartment and then murdered the girls, who were asleep in their beds, was a fabrication.

She said police found a suicide note in Berry’s apartment and he asked four first responders at the scene to “kill me.”

Jennings said Berry killed his daughters because he wanted to hurt his former partner and his own parents for his difficulties.

“His actions were about blaming those people,” she said.

Gropper said the Crown proved beyond a reasonable doubt that Berry killed his daughters on Dec. 25, 2017.

“I believe the Crown that the jury did not believe Mr. Berry’s testimony,” she said.

The judge said Berry’s testimony that he was attacked by a dark-skinned man who killed the girls must be rejected. She said it “defies logic” somebody would murder the two girls and then leave Berry alive in his tub suffering from superficial wounds to his neck.

Gropper said the Crown proved Berry undressed himself, ran water into the bathtub and got into the tub himself.

She said the Crown also proved beyond reasonable doubt Berry wanted to harm his former partner and his parents.

“He wanted (Sarah) Cotton and his parents to blame themselves for his suicide,” Gropper said.

The judge said the Crown produced evidence that Berry talked frequently about his relationship issues with Cotton, to the point where he continued to blame her for their differences even after the murders.

A victim impact statement from Cotton, the mother of the girls, is expected to be read Tuesday as part of the sentencing proceedings.

Second-degree murder carries an automatic life sentence, but parole eligibility can be set at a range of between 10 to 25 years. The judge must also decide if sentences for multiple counts of murder should be served consecutively or concurrently.

Following Berry’s conviction in September, six of 12 jurors recommended Berry serve 15 years, consecutively, on each murder count; two jurors called for a 10-year sentence to be served concurrently; and, four jurors made no recommendation. 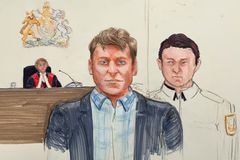