Special prosecutors have been appointed to handle criminal contempt proceedings against two British Columbia MPs arrested alongside dozens of others during protests against Kinder Morgan’s Trans Mountain pipeline expansion.

The appointments were necessary “to avoid any significant potential for real or perceived improper influence in the administration of criminal justice,” according to a statement from the BC Prosecution Service (BCPS).

The BCPS also announced on Monday that criminal – not civil – proceedings are warranted for those who were arrested at Kinder Morgan’s Burnaby facilities in breach of a court injunction. B.C. Supreme Court Justice Kenneth Affleck had said one week earlier that he is of the view that the public nature of the breaches warranted criminal sanctions.

As well, the BCPS will take over the prosecution from Trans Mountain lawyers. Justice Affleck had said a private litigant should not shoulder responsibility for the prosecution.

The proceedings against Ms. May and Mr. Stewart have been adjourned for two weeks. Trials for dozens of other protesters arrested in recent weeks will begin May 7, in groups of 10.

Mr. Stewart, who appeared in court on Monday alongside 18 others who had been arrested, said he had reviewed the possibilities and is prepared for what may happen. Ms. May was in Ottawa and had her lawyer attend on her behalf.

“I’m here today respecting the process and I will continue to be,” Mr. Stewart said. “And I’ll go back to parliament tomorrow to make my political case for why this pipeline is not a good idea.”

Nearly 170 people have been arrested since mid-March during protests at Kinder Morgan’s Burnaby Mountain facilities. Of those, 124 people have either been served personally with contempt motions or received materials and been in contact. As of Monday, there were 78 people on the trial schedule.

Opposition to the contentious pipeline expansion project has taken the form of court challenges, interprovincial trade disputes, petitions and protests that have drawn thousands of people to the Burnaby site with regularity.

On April 8, Kinder Morgan announced it would suspend all non-essential activities and related spending on the project, with chairman and chief executive officer Steve Kean saying the company “cannot litigate its way to an in-service pipeline amidst jurisdictional differences between governments.”

The pipeline company said it would consult with stakeholders in an effort to reach agreements by May 31 that could allow the project to still go ahead.

Before entering the courtroom on Monday, Mr. Stewart noted that the National Energy Board (NEB) must still approve one-third of the final route, and that Kinder Morgan has so far met less than half of the NEB’s 157 conditions.

Ms. May did not comment on her own case but spoke generally on Prime Minister Justin Trudeau’s pledge that he would introduce “legislative and financial measures” to push the project forward.

“If Trudeau’s Liberals want to bring in legislation to confirm the status quo, which is to say there is federal jurisdiction over interprovincial pipelines, fine. It accomplishes nothing,” Ms. May told reporters in Ottawa on Monday. 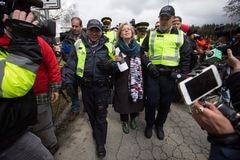