The Squamish Nation wants British Columbia to halt old-growth logging in their traditional territories, giving notice it will oppose 20 proposed forestry cutblocks around Howe Sound, north of Vancouver, where they say ancient forests are at risk.

The decision, voted on by Squamish Nation council on Thursday, was made just one day after British Columbia Premier John Horgan approved deferrals at the request of local Indigenous communities to suspend old-growth logging in the Fairy Creek watershed and in the nearby Central Walbran.

“We’re asking the government to support Squamish management of our lands and resources that rightfully belong to us,” Khelsilem, an elected member of the council, said in an interview. “The government is infringing on our rights by allowing these sites to be logged without our permission and without our consent.”

On Wednesday, Mr. Horgan accepted the direction from three Vancouver Island First Nations about logging in their traditional territories, calling it the start of a transformational journey in the forest sector: “We have allowed the title holders to make decisions on their lands.”

The Squamish decision was made just two days after the province received the requests for logging deferrals from the Huu-ay-aht, Ditidaht, and Pacheedaht First Nations. Almost 200 people have been arrested at blockades in their territories since mid-May, putting pressure on Mr. Horgan’s government to act on his election commitments to protect old-growth forests.

But that urgency has not been reflected elsewhere. In a letter to the Premier, the Squamish Nation council said the province has demonstrated no meaningful action.

“Our forests play an integral ecological role in the biodiversity and health of B.C. ecosystems and possess incalculable and irreplaceable cultural value and significance for our Nation,” the letter states.

“In light of the ongoing risk of development to old-growth forests and the importance of these forests to our Nation’s well-being – including our cultural, spiritual and economic needs – we demand that the B.C. government take immediate and sustained action to defer all harvest and development activities within areas of concern and to ensure that we as a Nation are included, consulted, and enabled to provide free, prior and informed consent respecting all commercial activity within our traditional territory.”

Speaking to reporters on Wednesday, Mr. Horgan said his government would respond as quickly as possible to requests from other First Nations for deferrals. “We are embarking on the journey to transform forestry. This is in everyone’s interests. It’s in the interests of those majestic forests and the biodiversity that depends on it. It’s in the interest of industry, because they can have certainty.”

BC Green Party Leader Sonia Furstenau said the government needs to provide swift agreement to the Squamish Nation’s demands. “Anything other than a positive response will show that this government is simply using the language of reconciliation when it suits them,” she said in a statement.

Forests Minister Katrine Conroy, in a statement, said those talks will take place. “Our government has already begun conversations with the Squamish First Nation on protecting old growth in certain areas of their territory. In fact, earlier this year we were able to announce an agreement that protects the Dakota Bowl area on the Sunshine Coast. We look forward to building on this work with the Nation.”

In 2019, the B.C. New Democratic Party government had enacted legislation that requires it to embrace the principles of the United Nations Declaration on the Rights of Indigenous Peoples, which in part includes the requirement to obtain the free, prior and informed consent from affected Indigenous peoples for resource development. (The bill would not grant First Nations veto power over resource development, but does promise redress and restitution when consent is not granted.)

Following on that legislation, the NDP government has now promised to overhaul forestry policies in consultation with Indigenous communities. But the province faces growing frustration with the pace of change. To buy more time, Mr. Horgan said there will be additional deferrals around the province to protect at-risk, old-growth ecosystems this summer.

Khelsilem said the Squamish Nation wants those deferrals now, noting it took years to win protection for the Dakota Bowl. “I think there’s a growing disconnect between government rhetoric and government actions,” he said. “I think many First Nations are becoming fed up with the lack of action by this government.”

The Squamish Nation says 78,000 hectares of old-growth forest are at risk within its traditional territories, which span 690,000 hectares from Vancouver to Gibsons Landing to the area north of Howe Sound. The proposed cutblocks are all within 150 kilometres of Vancouver, and the Squamish say those forests house intact ecosystems, which have regenerated naturally under their stewardship since time immemorial.

The province has already moved to protect some old growth in the Squamish territories, but Khelsilem said 56 per cent remains unprotected. 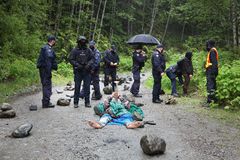