Adrienne Tanner is a Vancouver journalist who writes about city affairs.

A study stemming from eight months of research into how mobility pricing (road tolling) could unclog Metro Vancouver roads appears headed for the dustbin.

TransLink’s Mobility Pricing Independent Commission released its report in May, proposing options which would cost drivers between $3 and $8 a day, but concluded more study is required before any move is made.

This allowed even those mayors who support the concept in principle, like New Westminster’s Jonathan Coté, to nod in agreement and conveniently postpone any tough decisions. Other members of TransLink’s mayors’ council went straight to the point, remarking on the level of political will needed to impose mobility pricing. It was clear that few of them, if any, had the stomach for that fight.

People abhor fees. Though provision can be made to discount the amount for low-income people, mobility pricing basically hits everyone. That’s a universally hard sell. Tolling and congestion-charge proposals in Toronto, Calgary and Montreal have gone nowhere and it seems likely Metro Vancouver’s plan is similarly headed for obscurity.

At first glance, that seems a shame. Traffic jams are infuriating for drivers, and they also carry economic costs. Apart from making a phone call (hands-free of course), it’s impossible to work while stuck in traffic. And hidden costs of congestion amount to between $500-million and $1.2-billion a year in Metro Vancouver, according to a 2015 C.D. Howe Institute study. When congestion causes people not to travel, it “stifles the key benefits of living in a city: learning face-to-face, finding better jobs and sharing services and infrastructure,” the study states.

Metro Vancouver residents are more than willing to tell you how fed up they are with bad traffic. Of those who participated in regional trip-diary surveys, 89 per cent said high traffic volumes made them feel frustrated and 61 per cent said congestion cost them money in transportation and lost wages or productivity every week. And yet most still don’t want to pay, even if it gets a bunch of other drivers off the road. Only one-third of those surveyed support mobility pricing.

Does that mean traffic will have to get a whole lot worse for mobility pricing to become politically palatable? Not necessarily. In London, which introduced a congestion charge in 2003, only 39 per cent of people initially agreed with the proposal. Approval ratings shot up once the fee was in place and congestion eased.

But people who make a study of transportation, like former Vancouver city councillors Peter Ladner and Gordon Price, say the commission’s mandate was rendered redundant shortly after it started work. It was formed when TransLink’s 10-year transit plan had no regional funding source. The provincial NDP fixed that, so the need for revenue stream from mobility pricing is no longer as dire.

Ultimately, mobility pricing may be eclipsed by British Columbia’s own provincial auto insurer, says Mr. Ladner, who heads the Better Transit and Transportation Coalition. He predicts ICBC will soon move to a distance-based insurance model, which is really another form of mobility pricing.

The future in transportation planning lies in technology which can track every kilometre we bike share, car share, bus, train, taxi or drive. Soon one app will be able to co-ordinate all transportation modes, Mr. Price predicts. Users will choose a package that best suits their needs, just like the mobile-phone plans we buy today.

Once every mode of transport is bundled, mobility charges can be slipped into the pricing equation and fees spread fairly among all users. Bundling would make individual fees less obvious and therefore less politically fraught – particularly if it’s connected with distance-based ICBC premiums.

Many kilometres will be driven before any of this comes to pass. Privacy, accountability, oversight and fairness are all predictable sticking points. Equitable transportation policy has always been a tricky business and grows trickier still given the pace of change.

Given the current lack of political will for mobility pricing or any other road tolling, there is no point asking the commission to embark on yet more study. Like drivers trying to cross the Lions Gate against the counterflow, they are gridlocked. 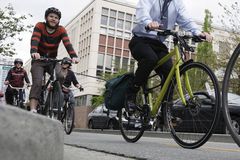 Vancouver traffic relief may be on the lines, report says
June 24, 2005
Follow us on Twitter @GlobeBC Opens in a new window
Report an error Editorial code of conduct
Due to technical reasons, we have temporarily removed commenting from our articles. We hope to have this fixed soon. Thank you for your patience. If you are looking to give feedback on our new site, please send it along to feedback@globeandmail.com. If you want to write a letter to the editor, please forward to letters@globeandmail.com.
Comments