An investigation is under way after two Mexican nationals – in British Columbia to work on a berry farm – were mistakenly caught up in a search for drug smugglers along the Canada-United States border.

The incident took place on the evening of July 20 near a farm in Abbotsford, east of Vancouver.

In a letter to Canadian officials, Mexico’s consul general in Vancouver, Berenice Diaz Ceballos, said the two workers called the consulate’s emergency line after allegedly being assaulted by police officers between 8 p.m. and 8:30 p.m. on July 20.

“The first national to call reported being outside the housing premises provided by the employer using his cell phone when he was suddenly ordered to lay on the ground and was punched, kicked and attacked by a police dog, as well as being pointed at with a gun,” Ms. Diaz Ceballos said in the letter.

“The second national reports that he was also using his phone and was surprised to see his coworker attacked and, while that happened, was also told to lay on the floor at gunpoint by police,” the letter said.

In a statement, the Abbotsford Police Department said the two men were mistakenly detained during a search for suspected drug smugglers in the area.

“We are aware that concerns have been raised regarding the detention of some men late in the evening on July 20, 2020 at an Abbotsford farm,” the statement said.

“We can confirm that on July 20 investigators with the RCMP’s Federal Serious Organized Crime Border Integrity group were working on an active drug-smuggling investigation along the Canada-U.S. border and searching for a number of suspects. There was a request for assistance to help locate suspects in that area, and Abbotsford police officers did attend and assist the RCMP. During the track for the suspects, individuals were found, detained and later released when it was determined they were not the suspects,” the statement added.

The statement said a complaint has been made to B.C.‘s Office of the Police Complaint Commissioner (OPCC) and that the OPCC has assigned the Vancouver Police Department to investigate the incident.

“The Abbotsford Police Department and RCMP have ensured there are open lines of communications between our agencies and the Mexican Consulate in order to address the matter and the concerns raised,” the statement said.

In her letter, Ms. Diaz Ceballos said one of the workers was taken to a hospital, where one of the police officers involved in the incident subsequently came to take a picture of him.

A consular official on Thursday said both men have been coming to B.C. as seasonal workers for 11 years and were outside, close to their living quarters on the farm, when the incident took place.

Andres Abogado, a lawyer for the Mexican consulate who practises in B.C., said the two men are shaken and having trouble sleeping.

“They were pointing guns at people who were totally innocent.”

Thousands of workers from Mexico come to B.C. each year to help harvest berries, grapes and other crops.

Charges laid in Vancouver assault that police say was motivated by racism
July 23, 2020 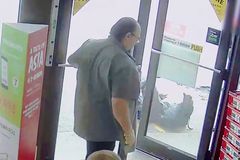