Who would have guessed a proposed rapid bus route would be the burning civic issue driving comfortable denizens of West Vancouver to hoist placards and hit the streets in protest? But that’s what happened in late February when anger surged over a plan to run B-line articulated buses from Main Street in North Vancouver to West Vancouver. The B-line proposal had been approved by Translink’s mayor’s committee as part of a regional 10-year-transit plan, and money for the new buses was already in place.

The protesters’ greatest concern seems to be about commandeering a lane now used by cars on Marine Drive and dedicating it solely to buses and drivers turning right or parking. The plan also calls for some street-parking removal, and some merchants have complained the losses would hurt businesses along the route.

But there were other less cogent arguments floated as well. “Children do not want articulated buses running past their school,” the CBC quoted one protest organizer as saying. That sounded odd to me. I would be amazed if children have any thoughts about B-line buses at all, unless their parents have been fulminating about the issue at the breakfast table. On Twitter, the back and forth between pro and anti B-line supporters quickly devolved into class war pitting generally less well-off transit users against West Vancouver motorists, some of whom are among the wealthiest people in British Columbia.

Now it may be that some of the protesters have a snobby disdain for buses. I’m sure there are some who wouldn’t be caught dead riding a bus alongside the help. Not so many years back, the definition of success was no longer having to take transit, where you are forced to rub shoulders with the hoi polloi. Cars were synonymous with freedom; freedom to control both your destination and your travelling environment. But that open-road euphoria evaporates in gridlock, and when traffic gets bad enough even the superrich start looking to public transit: Think subway into Manhattan’s Midtown.

Concern over climate change has given public transit somewhat of a renaissance, particularly in urban centres where service is more frequent and faster. Many young people in Vancouver rely exclusively on transit, car sharing and bicycles to get around. Seniors also migrate to transit when they no longer wish or are able to drive. And despite the antagonism aimed at the B-line, transit use in West Vancouver is growing; ridership jumped by 9.8 per cent between 2017 and 2018.

Still, the most vocal West Vancouver power brokers tend to be steadfastly wedded to their vehicles.

To transit watchers, arguments coming from the West Vancouver B-line protesters are the same tired tropes advanced by motorists everywhere as they fight to protect their own roadway turf. We’ve heard it so many times in Vancouver. Former Vancouver city councillor Gordon Price says the objections emanating today from West Vancouver are identical to those from Vancouver in the mid-1990s when the first B-line route was proposed along South Granville. The transit line connecting Vancouver to Richmond was desperately needed to ease congestion on the commuter route. But the bus was not immediately welcomed by affluent residents along the route who argued it would kill the South Granville business district. After tweaking the original plan to preserve street parking on the shopping strip, the council of the day approved the line. The bus was a hit and soon reached capacity. Eventually, it was replaced by the Canada Line train. And yes, the South Granville shopping strip survived. Yet similar protests still erupt every time a slice of roadway is ceded to bikes, even though studies have shown Vancouver’s bike lanes haven’t hurt business or caused congestion.

Nonetheless, the recent B-line protests caught West Vancouver City Council by surprise. Even though Translink’s numbers show the B-line would attract between 6,000 and 7,000 riders a day, council refused to support the plan. It voted to allow the B-line into West Vancouver, but only as far as Park Royal on the very edge. Staff are now revising the remainder of the route. Mr. Price believes the entire plan will eventually be approved. Without good transit service, people have to keep driving, and the gridlock the B-line was designed to alleviate will get even worse. We must ensure Vancouver learns from other cities’ ride-hailing-service missteps
January 25, 2019 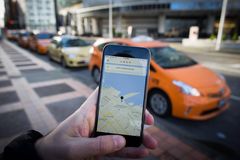