For the first time in its 64-year history, the Vancouver Aquarium is closing to the public indefinitely – a shutdown linked to the financial challenges of COVID-19.

Leaders at Canada’s largest aquarium announced the move on Monday. They said 209 workers – about half the work force – would be laid off, and there is no word on when the aquarium will reopen to visitors.

“Will this be over next year at this time? Your guess is as good as mine,” Lasse Gustavsson, president and chief executive officer of the Ocean Wise non-profit organization, which runs the aquarium, said in an interview.

“The honest answer is we don’t know when we will open again.”

The aquarium leaders are trying to figure out how to operate with challenges that include an 80-per-cent drop in ticket sales.

The staff who remain will take care of the animals in the Stanley Park facility, which opened in 1956.

The aquarium now has to figure out how to offer an inspiring experience to visitors who need to be safe.

“I have no illusion we would be able to continue with business as usual,” Mr. Gustavsson said. “This is a terribly sad day for me as the leader of this organization. What I do know it is the right thing to do.

“There’s not a single aquarium in North America that is open and making money at the moment. The whole aquarium industry will have to revamp and transform itself into something that is attractive for visitors and safe during pandemic times.”

In April, the aquarium warned it was facing bankruptcy after the pandemic cut revenues to almost zero. It was closed for three months until June.

But it now cannot cover operating costs of about $1-million a month.

Mr. Gustavsson said the newly announced layoffs will take effect ahead of a Sept. 7 end to public programming. Hardest hit will be staff in guest services, retail and the restaurant, but the administration will also be affected.

At least 75 specialized staff are to remain, caring for about 70,000 animals. Some creatures, such as the sea lions, seals and rescue otters, relish contact with people, he said.

The B.C. Tourism Ministry described the development as “disappointing news” in a statement issued on Monday.

The ministry did not commit to financial help for the aquarium, but said the government has a pool of emergency funding available to guarantee care, food and medicine for animals in facilities.

The Vancouver Aquarium has received about $1.8-million of $3.7-million from the program, the ministry statement said.

Mr. Gustavsson said he has been in touch with governments, but no substantive commitment has been made to help.

Animal-rights activist Jeff Matthews, formerly with the Sea Shepherd Conservation Society, said in an interview that he hoped the aquarium leaders will listen to a wide variety of voices in their review.

“Most of us activists have never wanted the aquarium to close. We’d just like them to become a better, more humane place – somewhere that focuses not on the captivity of animals, but something more sincerely focused on helping animals,” Mr. Matthews said.

He pointed to a “sanctuary model” in which whales, dolphins and other creatures live in a more natural marine environment.

“There’s an emerging social consensus that animals deserve better than being confined and exploited in zoos and aquariums, which is why Canada outlawed whale and dolphin captivity last year,” she said. “The Vancouver Aquarium would be wise to embrace this change, and fully transition into a sanctuary, where the best interests of the animals come first.”

Toronto Zoo planning for ‘drive-thru’ visits when allowed to reopen, spokeswoman says
May 14, 2020 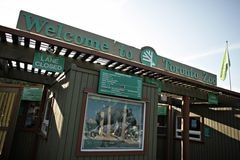 Opinion
For the Vancouver Aquarium, the enduring legacy of this pandemic should be reinvention
April 28, 2020