On Feb. 18, when British Columbia’s Finance Minister Carole James delivered her budget speech in the provincial legislature, there were more than 75,000 cases of COVID-19 worldwide, but just five cases identified in British Columbia, according to tracking by Johns Hopkins University.

The health crisis created by the rapid global spread of the virus wasn’t foreseen, at that point, as a major economic threat here in B.C. It is a reminder of how much the world has changed in less than a month. The provincial economy, greatly dependent on international trade and tourism, will not look anything like what was envisioned when, in her spending plan, Ms. James outlined promised growth, stability and opportunity for the coming year.

On Friday, Premier John Horgan spoke of the need to help workers “that will be displaced as a result of the almost cross-economy shutdown of activity." He warned, “you can go sector by sector by sector, and you’re seeing disruption."

The economic impact of this virus, it is now clear, will be significant, with government revenue shrinking and the cost of delivering essential services escalating. Even before the fiscal year begins, the fundamental forecasts the budget is based upon have shifted.

“We are faced with what looks like an unfolding calamity that, in economic terms, will rival if not exceed what happened during the great financial crisis and global recession of 2008-09,” said economist Jock Finlayson, chief policy officer at the Business Council of British Columbia. “This calls for a different playbook.”

On Friday, federal Finance Minister Bill Morneau announced $10-billion in stimulus spending – a reminder that B.C. is not standing alone. Nor are the provincial coffers empty – B.C. heads into these uncertain times in a relatively strong fiscal position. B.C.'s balanced budget, however, will likely turn out to be a deficit.

The official playbook – the budget – was based on economic growth of two per cent, which allowed Ms. James to project a surplus of $227-million in the fiscal year that starts April 1.

Mr. Finlayson, who is one of the key contributors to the private-sector forecast that B.C. relies upon for its budget projections, says that economic forecast is already out of date.

Earlier this month, the business council downgraded its B.C. growth outlook for 2020 from two per cent to 1.4 per cent. “If we were doing the same today, it would fall further,” he said. "Likely to one per cent or so. That alone translates into an operating deficit for the province in fiscal 2020-21. And there is lots of downside risk from there.”

A change in economic growth of one per cent would mean, by itself, an annual impact on the province’s finances of between $150-million and $250-million, according to budget documents.

The budget includes a built-in cushion, with $900-million available for unforeseen circumstances. That can be swallowed up quickly, however. In 2017, contingencies were mostly consumed by a single expense; the cost of fighting massive wildfires.

Now, there are many uncertainties, but one thing is assured: B.C. will face unprecedented demand on its health-care system at the same time that its revenues drop.

Mr. Finlayson believes Ms. James has plenty to do, but worrying about preserving a surplus isn’t a priority.

“Candidly, the priority for government today is not to worry about the deficit," he said. “It is to stand ready to support the health-care delivery system, ensure that supply chains for essential goods continue to operate, assist affected households – people who lose employment or can’t work – and address the difficulties likely to descend upon particularly vulnerable, exposed economic sectors.”

Mr. Horgan, whose NDP government is not often in step with the views of the business council, agreed.

“The fiscal plan was [made] prior to massive drops in the stock markets, that was prior to massive drops in expectations for growth rates, not just in B.C., but internationally,” Mr. Horgan told reporters. The balanced budget now “is definitely at risk," he said. “I did not seek election and I did not want to form a government just to balance the budget, it was to deliver services for people."

A month ago, a surplus was an important badge of accomplishment for his NDP government. It is no longer.

Opinion
B.C.'s Carole James takes on Parkinson’s with the toughness that defines her
Subscriber content
March 6, 2020 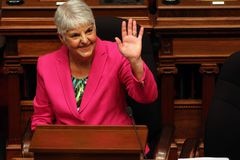 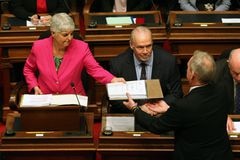