The Canadian Armed Forces, sent to British Columbia last week to help deal with major flooding in parts of the province, is shifting much of its focus from the beleaguered community of Grand Forks to the Fraser Valley, which could emerge as a new front in the battle against rising waters.

In a statement on Sunday, a military spokesperson said the need for soldiers’ assistance in Grand Forks has ended, adding that they left the area after a second flood surge failed to cause the chaos of an earlier rise in water levels, which had forced hundreds of people out of their homes.

Last week, about 100 armed-forces members were deployed to Grand Forks and 44 to West Kelowna in Twin Lakes, west of Penticton.

Soldiers were returning to their main base in Vernon, B.C., to await new assignments and could soon establish a presence in the Fraser Valley if provincial officials require it, according to the statement issued by senior public-affairs officer John Northcott.

“We have been assisting in sandbagging, dike construction – to protect key assets from damage – and evacuations as required in the Grand Forks and Okanagan areas. The work should be similar, if called by the province, to assist in the Fraser Valley area.”

On Sunday, Jason Lum, chair of the Fraser Valley Regional District, said in an interview that the vital Fraser River gauge in Mission, B.C., was running at 5.9 metres, with seven to eight metres being the red-line level for some flooding in the region east of Vancouver.

“When you see an eight-metre level, we’ll expect flooding into the diked areas,” he said.

While Mr. Lum said there are expectations that the river will stabilize over the next two or three days, he added that expected “unseasonably warm” weather in the Prince George region has raised concerns about melting snowpacks, which could raise the waters of the Fraser River.

“I am cautiously optimistic,” he said. “We hope for the best, but we’re well prepared in case there is a significant event.”

As for a military role, Mr. Lum said, “It’s wait and see. We’re certainly appreciative of the help.”

Roeland Zwaag, director of public works in the Township of Langley, near Vancouver, said on Sunday that about 260 people in the township living in low-lying properties unprotected by dikes are on evacuation alert.

In a statement, the township noted that the Mission Gauge reached 6.03 metres and 6.37 metres in 2012. As a result, alerts were issued but evacuations were not deemed necessary.

Over the weekend, the Regional District of Kootenay Boundary began lifting evacuation orders on some properties after cooler temperatures and less rainfall spared the area from a second expected surge of catastrophic flooding.

During a conference call with the media, Dan Derby, the regional fire chief in the district of Kootenay Boundary, said on Sunday that river levels are dropping more quickly than expected.

He said Grand Forks was initially hit by a mix of melting snowpacks and rain, causing flooding that swamped the community. “The best information said we were going to get hammered a second time, and we got very lucky that it didn’t happen,” Mr Derby said.

As of Sunday, Mr. Derby said about 2,600 people were evacuated from about 1,297 homes − a number that he said he expected would drop significantly in the next few days.

More than 40 firefighters are doing rapid assessment of homes and businesses affected by the flooding to determine whether they are safe for entry. “There are a higher number of them than we anticipated are green or safe to re-enter,” he said.

The goal, he said, is to have as many people cleared to return home as quickly as possible, and to open the downtown core of Grand Forks for business by Tuesday, clearing sandbags and removing dams that were raised during the flood. Evacuation orders lifted for some properties in Grand Forks, B.C.
May 20, 2018 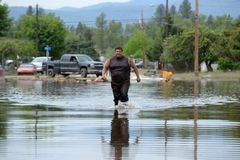 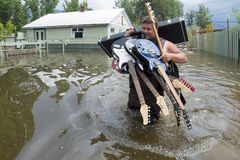