Two Catholic churches built more than a century ago on First Nations land in British Columbia’s southern Okanagan region were destroyed early Monday morning by fires that authorities are investigating as suspicious.

Although the RCMP is not saying the two blazes were arsons, Bob Graham, chief of the Oliver Fire Department, whose crews stamped out the St. Gregory’s fire, says liquid accelerants were found outside the burned-down building.

Mr. Graham said the fire had been burning for a while before it was reported just before 3 a.m. He added that he suspects a connection to the earlier destruction of Sacred Heart Church, an hour’s drive north.

“I believe that they were connected – not necessarily by the same person, but wouldn’t it seem coincidental to you that two Catholic churches on Indian reservations on [National Indigenous People’s Day] would all of a sudden start on fire?” Mr. Graham told The Globe and Mail.

He said that the provincial Office of the Fire Commissioner is sending an investigator to the scene.

The RCMP says an on-duty officer spotted the earlier Penticton fire just after 1 a.m. By the time he arrived, the structure was fully engulfed in flame.

“Should our investigations deem these fires as arson, the RCMP will be looking at all possible motives and allow the facts and evidence to direct our investigative action,” Sergeant Jason Bayda, an RCMP spokesperson, said in a statement.

“We are sensitive to the recent events, but won’t speculate on a motive,” the statement said.

The RCMP said it is working with both the Penticton and Osoyoos Indian Bands as it investigates these fires.

National Indigenous Peoples Day has been observed in Canada since 1996. It has been a statutory territorial holiday in the Northwest Territories since 2001 and in Yukon since 2017.

This is an especially fraught moment for the relationship between Canada’s Indigenous people and the Catholic Church. After the Tk’emlúps te Secwépemc First Nation announced last month that a preliminary search with ground-penetrating radar had discovered the unmarked graves of 215 children near the former Kamloops Indian Residential School, which was a church-run institution, Indigenous crisis lines fielded an explosion of calls for help from people across the country.

Representatives of the Penticton Indian Band and the Osoyoos Indian Band did not immediately respond to requests for comment Monday.

Grand Chief Stewart Phillip, president of the Union of British Columbia Indian Chiefs, said it is too early to tell why the churches were set ablaze. But, he said, it is clear that his Penticton Indian Band has been devastated by the destruction of the historic Sacred Heart building, which was built in 1911.

Mr. Phillip, who led the Penticton nation for 14 years ending in 2008, said many of the band’s members gathered to watch the church burn. “There was a particular moment when the structure was failing that the church bell fell from the tower,” he said. “When it hit the ground there was a single ring, and that triggered people and they just started crying.”

Ry Moran, associate librarian of reconciliation at the University of Victoria and founding director of the National Centre for Truth and Reconciliation, echoed others in saying that it is too early to ascribe a motive to the suspected arsons.

But, he said, there is a very long and complicated history in Canada of buildings such as residential schools being intentionally destroyed in order to address past wrongs. Only 16 of Canada’s roughly 140 residential schools remain standing, he noted.

Sacred Heart Church was still holding regular services before the pandemic disrupted religious gatherings, according to the parish website. A representative of the parish did not immediately respond to a request for comment Monday.

St. Gregory’s Church was in disrepair and only opened for the odd baptism or wedding ceremony, Mr. Graham of the Oliver Fire Department said. 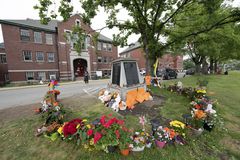 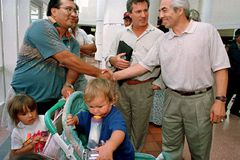 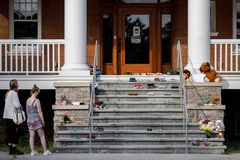