A student forum aimed at promoting ties between the Canadian and Chinese business communities cancelled appearances by representatives of two Chinese companies that activists have accused of being involved in rights violations.

The two companies, SenseTime and Sina Weibo, had been invited by the University of British Columbia’s BizChina Club to deliver presentations at the forum, which was endorsed by UBC president Santa Ono and the Chinese consulate. However, after the speeches drew backlash from Uyghur groups in Canada this week, the two speakers – SenseTime’s Jimmy Zhou and Sina’s Lina Chen – were dropped from the program.

“Due to extenuating circumstances, our speakers from SenseTime and Sina Weibo will no longer be participating in the 2019 UBC China Forum. We apologize for the short notice and wish everyone will have a pleasant weekend at our event,” reads a note on the forum’s website.

The forum, which took place in downtown Vancouver over the weekend, came under fire as SenseTime, a Chinese company that focuses on developing AI technologies, was blacklisted by the United States last month for its alleged involvement in China’s repression of its Muslim minority groups in the Xinjiang Uyghur Autonomous region.

“They contribute to the cultural genocide of the Uyghurs,” said Shalina Nurly, youth leader for the Vancouver Uyghur Association, adding she was very disappointed and shocked to see Mr. Zhou was invited to a Canadian university event.

Ms. Nurly’s group had planned two protests on both Saturday and Sunday, calling for banning Mr. Zhou’s speech, but cancelled the second one after two speakers were removed.

“It made me happy because we saw the result of our work and the fact that we stood up could make could make a difference,” she said in an interview on Sunday.

The U.S. Department of Commerce’s Bureau of Industry and Security said in a document that SenseTime, along with several other entities, was enabling activities contrary to the foreign-policy interests of the United States.

“Specifically, these entities have been implicated in human rights violations and abuse in the implementation of China’s campaign of repression, mass arbitrary detention and high-technology surveillance against Uighurs,” the document says.

In response to the document, SenseTime said it was “deeply disappointed."

“We abide by all relevant laws and regulations of the jurisdictions in which we operate. We have been actively developing our AI code of ethics to ensure our technologies are used in a responsible way,” reads a statement on SenseTime’s website.

The company also says on its website that it partners with a number of big corporations in China, as well as the country’s government agencies such as the Public Security Department in Yunnan province and a public security bureau in Guangzhou. In 2017, China’s tech giant Huawei and SenseTime jointly launched high-capacity face recognition technology.

A statement issued by the office of the Consulate-General of the People’s Republic of China in Vancouver Saturday says it encourages students’ efforts to promote China-Canada exchanges and appreciates their innovation and entrepreneurship. The consulate says it is against any attempts to “smear Chinese companies’ lawful and legitimate operations, obstruct the normal cooperation between China and Canada and target specific foreign businesses.”

Earlier this week, China expert Charles Burton, a professor at Brock University, said the UBC Board of Governors should intervene to withdraw the “shameful invitation” to Mr. Zhou.

Kurt Heinrich, senior director of UBC’s media relations, said the forum was a student initiative and the university was proud of its students who engage on global issues.

The university’s spokesman Erik Rolfsen said on Sunday that dropping the speakers was an independent decision made by the students.

“We know what’s going on, but they deleted it all,” she said.

People in China cannot read the Western media coverage about “the camps [on Weibo] because they don’t want it to be out there.”

The Globe and Mail reached out for comment from the student group that arranged the conference but was told organizers were too busy to speak Sunday. The Globe attempted to attend the sessions but was told only registered media were allowed. Requests to register for the conference last week were not answered.

SenseTime and Sina Weibo did not respond to e-mails on Sunday afternoon Pacific time.

Editor’s note: An earlier version of this article incorrectly said BizChina Club is part of the Commerce Undergraduate Society at the UBC Sauder School of Business. The university provided the incorrect information. 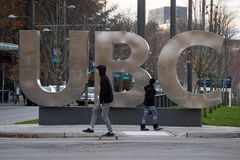 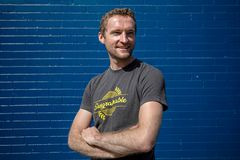