Two people are under investigation in connection with the beating of a friend of Vancouver-area blogger Gao Bingchen, who has been critical of a fugitive Chinese tycoon with links to former White House adviser Steve Bannon.

Last week, two people protesting against Mr. Gao were arrested by Surrey RCMP after they allegedly hit and kicked human rights activist Louis Huang, a friend of Mr. Gao. Mr. Huang was hospitalized and said one of his front teeth and bones around his right eye were broken.

The protesters are supporters of Guo Wengui, an exiled Chinese billionaire. They are among dozens of people that have been gathering almost daily in front of Mr. Gao’s home in Surrey, B.C. They accuse the media personality of being an agent for the Chinese government, which Mr. Gao has denied.

Surrey RCMP Corporal Elenore Sturko said police arrested two people associated with the protests after an assault took place. She said the pair has been released with a future court appearance and an order not to be in the area of Mr. Gao’s home. She said a report will be forwarded to Crown counsel to determine if charges will be laid.

According to a video captured by Mr. Gao’s surveillance camera and posted by Mr. Gao on his social media, the protesters were talking to Mr. Huang at first. But suddenly, the chat turned violent, with Mr. Huang then pushed to the ground, hit and kicked multiple times in his head.

“[I] felt frightened, hard to believe,” Mr. Huang said in an interview.

The protesters usually set up tents in a public area across from Mr. Gao’s house and often put up cameras facing Mr. Gao’s house to live-stream activities. In a video they posted last Wednesday, the two protesters were talking to Mr. Huang at a distance while Mr. Huang was smoking. The pair then approached Mr. Huang, with one leaning his face close to Mr. Huang.

On that video, they say Mr. Huang blew smoke into their faces, an unsafe act during the COVID-19 pandemic.

Mr. Huang said he had been planning to accompany Mr. Gao to visit RCMP and Surrey City Hall, asking them again to take action to end the protest. Mr. Gao has said he has received death threats from the protesters and has reported them to the police.

“But the police didn’t provide us with any protection measures, which resulted in the injury of my visitor,” Mr. Gao said.

Cpl. Sturko confirmed the police are investigating a report of uttering threats and evaluating whether the demonstrations require further action.

Mr. Gao used to be a columnist for a Chinese-language newspaper in the Vancouver area. In 2016, his column was abruptly cancelled when he wrote critically about Chinese Foreign Minister Wang Yi. After that, Mr. Gao has been publishing articles on WeChat and created his own YouTube channel, which has near 30,000 subscribers.

He attracted attention from Mr. Guo and his supporters after he repeatedly criticized Mr. Guo and questioned his credibility. Earlier this year, Mr. Guo, in several videos, asked his followers to take action to “eliminate traitors” who serve the Chinese Communist Party across the world. The Surrey blogger was on the list, along with others that include prominent Chinese dissidents.

Mr. Guo is a real estate magnate who fled to the United States in late 2014 after he was accused of money laundering, bribery and rape by the Chinese government. Since he left, he has styled himself as an insider capable of taking down the Chinese Communist Party. Mr. Guo is the owner of the yacht where police arrested Mr. Bannon on fraud charges this year. Mr. Guo and Mr. Bannon have been partners in several ventures, according to the Washington Post.

In June, 2020, Mr. Guo and Mr. Bannon founded New Federal State of China, a self-proclaimed pro-democracy group. Protesters against Mr. Gao often wear uniforms with the logo of this group.

Opinion
Why so many Americans are embracing authoritarianism
Subscriber content
November 20, 2020 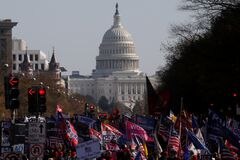 Facebook offers up first-ever estimate of hate speech prevalence on its platform
November 20, 2020 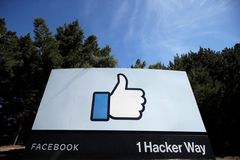 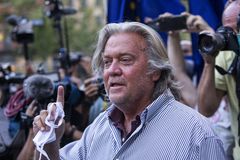